The Artist and the Eternal City: Gian Lorenzo Bernini’s Career in Rome 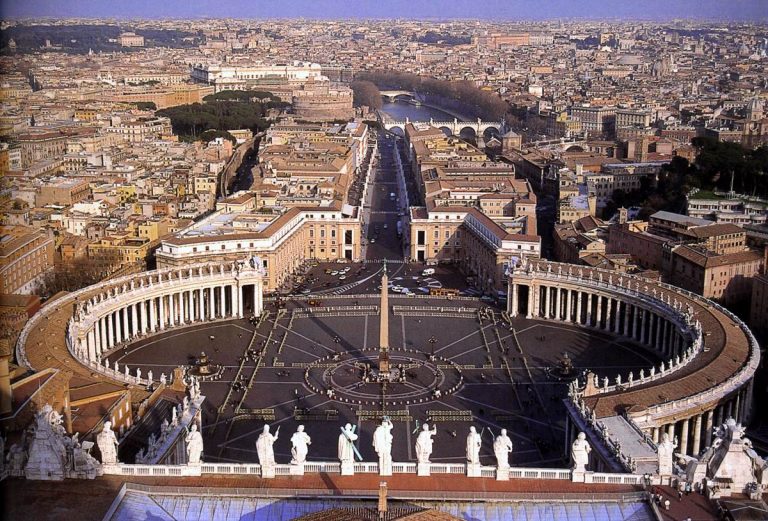 Can an artist single-handedly impact an entire city? Considering that the city in question is Rome, probably not. But add to the mix an influential politician and you have a recipe for success. Loyd Grossman’s book, The Artist and the Eternal City, charts the path of Gian Lorenzo Bernini through the streets of Rome. Bernini certainly changed our expectations towards sculpture; his ability to breathe life into figures made of stone is unmatched. But without the patronage of the popes, and Alexander VII especially, he would remain just a sculptor. Their support allowed him to evolve into a creator who transcended the borders between arts to change Rome forever. Add to this Grossman’s storytelling gift and you have a perfect holiday read.

I know book reviews rarely focus on who the author is, but trust me, it matters here. Loyd Grossman is an author, broadcaster and cultural campaigner – among his other jobs he was the host of Masterchef for a decade. You may say that if anything his television career makes him even less suited to write a serious book about art. But that’s not the case. His passion for art, combined with his gift of making the tale flow, works miracles with a subject matter that has been researched over and over.

This book could be just another dry academic analysis of Bernini’s career and his relationships with the popes, but it isn’t. Grossman makes it personal. He begins his tale by telling us how he fell in love with Rome and what role Bernini’s Elephant and Obelisk statue played in it. It is thanks to Grossman’s voice, passion, and careful selection from the vast body of research on the topic that this book flows so well. He manages to find a balance between giving us the anecdotes we need to be entertained and the facts required to inform us. Never falling into the trap of cheap scandal, but also masterfully avoiding overburdening us with dates, places and boring lists.

Forging a Career in Rome

While Grossman starts with the Elephant and Obelisk, as soon as he has our attention he follows the more conventional chronological path, briefly describing Bernini’s way to Rome and his first patronage with Scipione Borghese, which made his career. With sculptures such as Apollo and Daphne and David, Bernini firmly established himself as a revolutionary and brilliant sculptor in Rome. Throughout his life, he worked for 10 popes. But it was his relationship with Urban VIII, turbulent times under Innocent X, and his most prolific period with Alexander VII that allowed him to really leave a mark on the entire city.

Urban VIII basically made Bernini his court artist. This allowed him to spread his wings and venture into architecture and urban planning. Let’s remember that Rome was not in the best shape at that time; the city was perceived as Caput Mundi, but with the Reformation on the up, the power of popes was waning. And the popes were adamant to use the power of art in service of their propaganda. Bernini was more than willing to oblige, for the right price of course. He became the architect of St Peter’s Basilica, embellishing the building with St Peter’s Baldacchino, among his other works.

Grossman swiftly moves from listing the works of Bernini to his relationships with the popes, to anecdotes about his personal life, such as the affair with Constanza Bonarelli. It resulted in a beautiful and intimate bust sculpture, but also in Bernini chasing his brother with a sword around a church and sending people to cut Constanza’s face. We can see Grossman is trying to be objective about Bernini’s personality, without glorifying him. It is said Bernini was charming and confident. But Grossman thinks this was an act, because in a 17th-century court everyone was a performer. Hence, Bernini’s act must have been underpinned by a toxic mix of arrogance and lack of self-confidence. Bernini did not doubt his abilities, but the complete reliance on his patrons to be able to make art at the scale he wanted to must have made him anxious.

This anxiety was not without foundation, for when Urban VII died Bernini’s fortune turned. Innocent X loathed everything to do with the previous pope, and that included his court artist. Grossman gives us fantastic context, describing the uncertainty and unruliness that accompanied the time between one pope’s death and the election of another.

It took Bernini four years to win back at least some of his previous position, since his rival Francesco Borromini swiftly moved to claim it. But what a win that was! The commission he secured was the Fountain of Four Rivers, to this day one of the most stunning sculptural achievements – the sheer audacity to balance the obelisk over empty space with very fragile support is amazing to this day. During this period he also worked on the Cornaro Chapel, which includes The Ecstasy of Saint Theresa. It is also so much more than just the sculpture: Bernini orchestrates all the arts together with one purpose only, to amaze us.

It was Alexander VII that allowed Bernini to fully spread his wings and soar. After the failure of the Thirty Years War and Peace of Westphalia, the pope needed to reassert his power. Alexander decided to use art, and he had an artist that was up for the task. That’s how Bernini was allowed to redesign St Peter’s Square, with the colonnade we instantly recognize to this day. He reconstructed Scala Regia, connecting the Basilica to the Vatican Palace, not to mention his work on many churches and sculptures.

In fact, Bernini got so famous that Louis XIV vyed for his services. And Grossman, in a delicious way, describes how that venture went.

While Grossman charts Bernini’s career, he also gives us a broader context. Rome as a city becomes alive, a place teeming with history, but still bustling with life. We get to know how the city’s politics functioned and how it impacted art. We get to know how much things cost back then and put Berinini’s takings in perspective. Grossman also deftly places Rome within the broader political context of Europe. All this he does with just a few sparse paragraphs. Exactly enough to give us what we need, but not long enough to bore us and make us drift away.

The book also bursts the bubble of the artist as a single contributor. In fact, Bernini’s workshop was not much smaller than Ruben’s. Otherwise, there was no way he would be able to accomplish everything he did. The core of his work was conceptual.

It is a great introduction to the period, place, and Bernini’s career. Well researched, but not boring, with anecdotes and facts weaved in that will keep you entertained. It’s one of those books that makes you learn without ever feeling the effort of acquiring knowledge. I did learn finally who the patron saint of a hangover is! With a ton of illustrations closely following the text, it is a real pleasure to interact with. Though probably best read in Rome, in my opinion the book is also a perfect beach read. And if you’re stuck at home, this is the best way to visit Rome remotely.