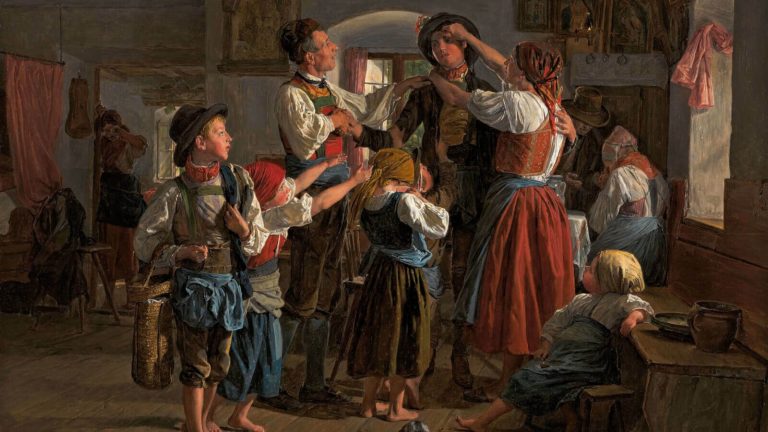 Conscript’s Farewell is a masterpiece by Ferdinand Georg Waldmüller. It explores a family’s reaction to the conscription of their beloved son.

Ferdinand Georg Waldmüller was an Austrian painter who lived from 1793 to 1865. He was the most famous and popular artist of the Biedermeier era which lasted from the Vienna Congress of 1815 to the Revolutions of 1848. Waldmüller specialized in vibrant images of peasant life that greatly appealed to the Viennese bourgeoisie. Waldmüller’s Conscript’s Farewell is a masterpiece of the peasant genre defining the Biedermeier style.

The image depicts a large peasant family during the final moments of goodbye. A son has been conscripted for military service and is flanked by his father on the left and his mother on the right. His grandparents cry and comfort each other in the right rear corner. The conscript’s five younger siblings surround him with various emotional responses. The only person not emotionally affected by the event is the servant awaking in the left rear corner who is lost in her sleepy morning thoughts.

Conscript’s Farewell has a strong circular composition established by the placement of the 10 family members and the one family cat. A perfect circle surrounds the group and creates a geometric focal point to the painting’s dramatic scene. The sleepy servant is outside the family unit and outside the compositional circle. She is simply a layout background accessory.

A mother’s love can be the strongest attachment in the world. Mothers can fight for their children without a moment’s hesitation of self-sacrifice. However, in this particular circumstance, the mother cannot fight for her son. Regardless, she still wants to protect him against the fatal risks of war. Therefore, she blesses him by signing a Christian cross on his forehead. Perhaps she has a small vial of holy water that she has dipped her index finger into for the brief but loving ceremony?

The mother’s left arm embraces her son’s neck while her right hand is poised to bless his forehead. A glimmer of tears marks her eye and reveals her truest internal feelings of sadness and fear.

Behind the mother, father, and son are the two grandparents. They sit in the rear right of the scene. The grandmother has her back to the viewer but her expression is still discernible. She holds a handkerchief to her eyes as her face leans forward in sorrow. You can almost hear the cries of anguish.

Trying to comfort the distressed grandmother is her husband, the concerned grandfather. He faces his wife with arms outstretched in the initial movements of a hug. His lips are parted, perhaps indicating he is saying something to ease his wife’s suffering. There is a slight tension between the grandmother lost in her feelings and the grandfather wanting to soften her pain.

Outside the human range of emotions is the simplistic existence of the family cat. It contentedly licks white milk out of a brown earthenware plate. The cat faces the viewer with its back to the human drama. Perhaps Waldmüller included the cat to comment on the higher feeling of people compared to those of animals? The cat definitely contrasts the family with its complacent attitude. The cat is almost saying, “as long as I am fed, I am happy.”

Above the people and the pet are the family’s religious icons. They are grouped together in the upper right corner of the room above the grandparents. An image of the Virgin Mary is clearly identifiable with her blue robe and tilted serene face. A small candle is alight in front of the Virgin, giving it a brighter presence than the other icons. To the right of the candle is a small wooden crucifix. It leans against an unidentifiable saintly icon in the corner.

The inclusion of the Christian icons strongly emphasizes this peasant family’s Christian beliefs. They are strong in their faith and strong in their belief of prayer. Perhaps the lighted candle marks a prayer for the conscripted son’s safe return home?

Ferdinand Georg Waldmüller captures so many emotions and miniature stories within Conscript’s Farewell. His masterful skill of color, texture, and light emphasize the different reactions to the son’s imminent departure. He also injects a sense of poignant nostalgia into the scene through its “home sweet home” details like the cat, the icons, and the humble furniture.

Some historians criticize Waldmüller for trivializing the subject of the peasants’ reality through sentimentalized stories and vigorously vibrant depictions. However, if Waldmüller was truly trivializing his subjects, he would not explore harsh realities such as war in his Conscript’s Farewell or sickness in his Interrupted Pilgrimage. His images would be all-happy, all-perfect, all-trivial. They are not.

While Waldmüller and other Biedermeier artists used a glossy style, they did not gloss over life’s difficult subjects. Are not the most beautiful books, paintings, and music sometimes the most sad? Yes, of course they are because they touch upon humanity’s collective ability to feel for others. Empathy is what makes us human, and Waldmüller explores this deepest emotion in Conscript’s Farewell. Empathy is at the core of this Waldmüller masterpiece. Happiness is beautiful, but not all beauty is happiness.