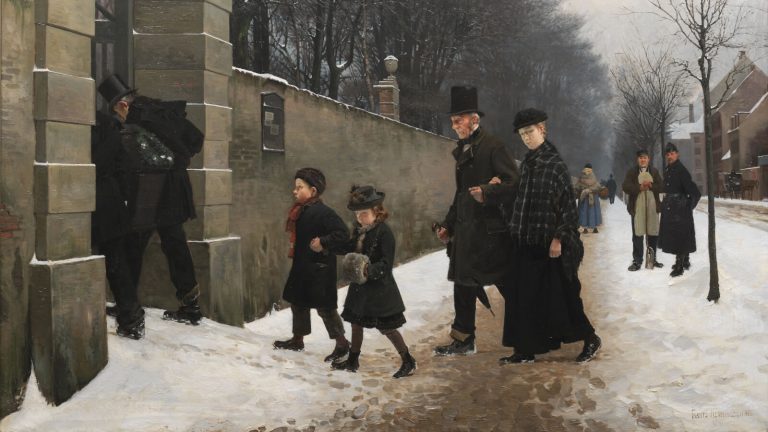 Funeral by Frants Henningsen is a Danish masterpiece of emotions. It examines the different psychological reactions to love, loss, and death.

Frants Henningsen (1850–1908) painted Funeral in 1883 with oil on canvas. It measures 37.4 inches (95 cm) high and 55.7 inches (141.5 cm) wide. When the Funeral was first displayed to the public, it was immediately recognized as a work of outstanding quality and was bought by the National Gallery of Denmark.

The painting captures a gloomy winter scene. A bereaved family walks in the foreground. A widow is being escorted by an older male relative. Her two children walk in front of her. The coffin of her husband and father of her children is being carried through the gates of the cemetery. Two onlookers, a policeman and gravedigger, stand in the mid-ground and observe the funeral procession in stony silence. In the background, Danish life continues with pedestrians and street sellers walking along the snowy sidewalk.

At the painting’s emotional core is the bereaved widow. She wears dark mourning attire which contrasts against her milk-white skin. Deep shadows encircle her eyes, implying extensive crying and sleepless nights. A glimmer of moisture lines her eyes expressing her teary sadness. The widow’s eyes gaze, unfocused at the ground, as she is lost in her thoughts. A slight curve to the widow’s belly implies she is with child. Therefore, is the widow questioning how she will support her fatherless children? How will her life be without the financial and emotional support of her husband?

Escorting the widow is an older male figure. His physical age would place him as either the father or father-in-law to the widow. He too wears dark mourning attire but in dark olive green. His face lacks the deathly pale shades of the widow and has a more flushed reddish hue. His brow is creased with wrinkles, and his chin is clenched in stern thought. His eyes are cast downward and appear to observe the two children ahead. Perhaps he wonders how the children will fare in the upcoming days?

Completing the small assembly of four attendants are the two children. A son and a daughter hold hands and walk in front of their mother. The little boy looks toward his father’s coffin. His eyes are wide, and he appears in a catatonic shock. The little girl echoes her mother’s demeanor. Her eyes are unfocused and shrouded in shadow too. The girl’s mouth has flickering highlights implying it is quivering. Perhaps she is attempting to restrain a growing sob?

The husband-father’s coffin is a simple affair. It is composed of wood painted black. A thinly carved cross appears on its headboard while a dark green wreath sits on its lid. A few white flowers are placed within the wreath’s leafy body, creating a delicate contrasting detail.

In the midground of Funeral stand two figures. To the right is a policeman in a navy blue hat and coat. He stands in profile with his hands resting on his lower back. His pert lips are framed by a thick mustache. His face is expressionless and does not indicate his inner thoughts.

To the left of the policeman is a gravedigger. He appears older than the policeman with his thick jowls and sagging chin. His face appears more flushed with its pink cheeks. The gravedigger wears a light apron and holds a shovel. Perhaps he has just left the freshly dug grave to observe the approaching coffin and its mourners?

Overall the painting is a gloomy scene filled with physical and emotional adversity. Physically the weather is poor. A cold winter landscape surrounds the procession. The skies are overcast, and somber colors dominate the image. Black, white, and grey command the color scheme. The cemetery walls are bare with no vegetation. The trees lining the street are bare with no leaves. There is an urban starkness that intensifies the emotional adversity of the situation.

The location of Funeral is an identifiably famous cemetery in Copenhagen. The Assistens Cemetery in the Nørrebro district was initially a cemetery dedicated to the poor and underprivileged. However, by the mid-19th century, it became fashionable with eminent burials like Hans Christian Andersen. Therefore, since Funeral is a contemporary scene from the late 19th century, it can be implied the family depicted is prosperous and with means. However, their financial wealth does not diminish their emotional poverty. No amount of money in the world can return their loved husband-father back to life.

Funeral is a bleak painting, but it explores the unavoidable and universal experience of loss. It explores how different people handle loss differently. It explores grief, like love, in its many shades. Yet, as Alfred Lord Tennyson once wrote,