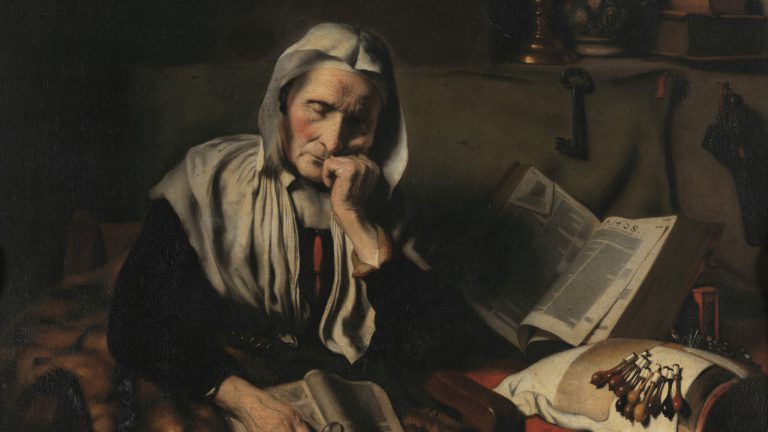 Despite its lack of vitality and vibrancy, Old Woman Dozing by Nicolaes Maes is an interesting painting. What it may lack in sparkle it gains in spontaneity. A spontaneous and impulsive moment is captured with almost an aura of contemplation for the viewer.

Nicolaes Maes lived during the Dutch Golden Age. He was a masterful painter of genre scenes, society portraits, and religious stories. At various times he lived and worked in both Amsterdam and Dordrecht. While living in Amsterdam, he was a pupil of Rembrandt and learned the basics of dramatic lighting, bold shading, and naturalistic details. Maes would later become the leading society portrait painter for the last 30 years of his life. Fashionable examples of noted sitters can be found in the Royal Museums of Fine Arts of Belgium.

Nicolaes Maes was only 22 years old when he painted Old Woman Dozing, but the skill and dexterity found in the painting prove that Nicolaes Maes was already a master of oil on canvas. The painting is medium-sized, measuring 53.1 x 41.3 in. (135 x 105 cm.). The figure is approximately two-thirds lifesize and dominates the genre scene among her household wares and home goods. The figure is an old woman who has just fallen asleep while sitting in her chair. With her book and eyeglasses grasped in her right hand and her left hand propping up her chin, Maes implies a sudden spell of sleepiness mid-activity. This is an unexpected nap and not a planned rest in bed.

The woman is not poor. The room where she naps is filled with high-quality items such as the fur cloak on her lap, the large book to the right, and the bronze candlestick and ceramic pitcher in the upper right corner. She is obviously a person of middle-class prosperity. She is not rolling in luxury but she is not destitute. She is comfortable and cozy in her surroundings. It could be believed that the woman is enjoying the fruits of retirement and genteel leisure.

The large book to the right of the woman is a heavy Bible. It is ajar and supported on a book prop. The open page is legible and is titled “AMOS.” Amos was one of the 12 Minor Prophets featured in both the Hebrew Bible and Christian Old Testament. The Book of Amos is one of many chapters found in most Bibles and clearly indicates where the woman was last reading before her nap. Since there are no symbols of Judaism within the painting, it is most likely that the woman is a Calvinist or Reformed Protestant which was a prominent faith in the Dutch Republic.

Beside the large Bible is a lacemaker’s pillow. Wooden bobbins lay on the front while their spindles of thread are held by pins in the rear. Bobbin lace is an incredibly time-consuming and meticulous product, requiring a lot of skill. Handmade versions, like the example in the painting, are very expensive to purchase and therefore are highly valued by lace connoisseurs. However, the inclusion of the bobbin lace in Old Woman Dozing has a more moralistic tone. Lacemaking was a symbol of industry and diligence. They represented a productive occupation and not the lazy leisure scorned by 17th-century Dutch society. Women were expected to run an economical, efficient, and productive household. Free time outside household duties was not to be spent wastefully. Making lace was a socially acceptable pastime for women. The resulting lace could either be used for limited personal adornment or for sale to generate additional household income. Evaluating the sitter’s austere and straitlaced attire, it is more likely the finished lace will be sold.

The various items in the upper right corner of the painting highlight the domesticity of the scene. The most significant item is the hanging key. The key is most likely used for the kitchen larder. Many homemakers would have locks on their kitchen larders where the most expensive ingredients would be stored. The homemaker would commonly be the only person to hold a key to the locked door to prevent unwanted waste and possible theft from other household members and servants. Expensive and locked ingredients would include granulated sugar, black pepper, and cinnamon with other guarded commodities such as tea leaves, and coffee beans. All these larder items were imports in the 17th-century and therefore were costly and treasured. The homemaker would have control over their allotment and allocation.

The viewer is presented with an everyday 17th-century Dutch event: a woman taking a pause from her Bible reading and lace making. The quietness and importance of the scene have sotto voce, as if Nicolaes Maes is intentionally lowering the volume of his voice for emphasis. He is saying in his hushed way that everyday activities can have strong moralistic and anecdotal interpretations. Therefore, Maes captures an unidealized figure with idealized concepts. Old Woman Dozing is an intriguing painting full of quiet qualities.

A. E. Waiboer., A. K. Wheelock, and B. Ducos: Vermeer and the Masters of Genre Painting. Translated by Caroline Beamish and Diane Webb. New Haven 2017.