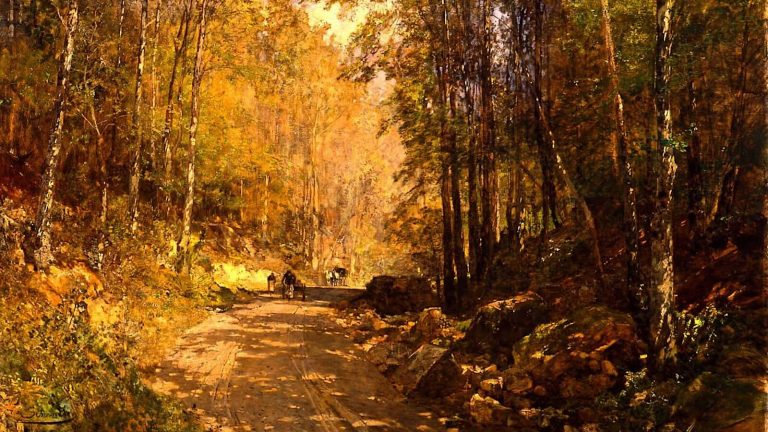 Forest Lane near Schärfling by Emil Jakob Schindler is a masterpiece of Austrian Impressionism. It is an enchanting place where the natural wilderness meets rural life.

Emil Jakob Schindler (1842–1892) was a 19th-century Austrian painter who specialized in landscape painting. He was known as the “Austrian Corot” due to his stylistic similarities with the famous French painter Jean-Baptiste-Camille Corot. Like Corot, Schindler worked en plein air (outdoors) and painted his canvases through direct observation and poetic interpretation. Consequently, Schindler became a founding member of Austrian Atmospheric Impressionism, an artistic style focusing on landscapes with Realistic technique but Romantic results.

Forest Lane near Schärfling is a major work by Schindler. It was completed in 1890 and now hangs in the Leopold Museum in Vienna, Austria. It is a monumental painting measuring 33 feet 11 ½ inches wide by 25 feet high (10.35 x 7.63 meters). This large canvas depicts the woods near the small Austrian hamlet of Schärfling. Like in 1890, Schärfling is a tiny isolated community in the woods of Upper Austria. Currently it has only 55 residents. The painting captures the dense forest of this remote location, and it also captures one of the few lanes connecting Schärfling to the rest of the world. Therefore, this forest lane may seem unimportant at first view, but it is important to the livelihood and existence of Schärfling.

Schindler conveys the majesty of the woodland through his masterful depiction of light and shade. As the sunlight filters through the trees’ leaves it creates an explosion of highlights and shadows adding depth and texture. The trees in the background near the curve of the lane are bathed in golden yellow light. There must be a field or opening in the forest’s canopy to allow such unfiltered light. The contrast between the illuminated background and the darkened foreground is beautiful. It adds a sense of distance and journey.

The play between light and shadow continues throughout the painting. Plants, boulders, and figures are equally treated to imply their shapes and forms. Schindler uses a hyper-realistic chiaroscuro (strong contrasts between light and dark) to capture realistic details. One of the strongest achievements are the furrows in the lane. The different colors imply impacted earth where cart wheels have rolled. Several furrows indicate several carts have recently passed through, hinting at a busy passage. The furrows, like the illuminated background, also add a sense of distance as they recede towards the horizon.

Along Forest Lane near Schärfling are three distinct figures in different forms of transportation. The closest figure rides a large tricycle. The figure behind and to the left of the tricyclist is a woman walking. She wears a cream half-apron around her waist. In the distance, the figure sits upon a four-wheeled cart or carriage pulled by two horses. The surrounding landscape is not an untouched wilderness. People populate the area, but the woods are mostly preserved in their raw beauty.

Emil Jakob Schindler once said that he desired “to consistently observe the changeable”. He used Realistic details to achieve a Romantic effect because he desired to illustrate feelings. Schindler, therefore, called his style Poetic Realism. His daughter, Alma Mahler, once wrote in 1902 that “in order to know Austria’s nature, one needs only to see the pictures of my father… Then one may understand it.”