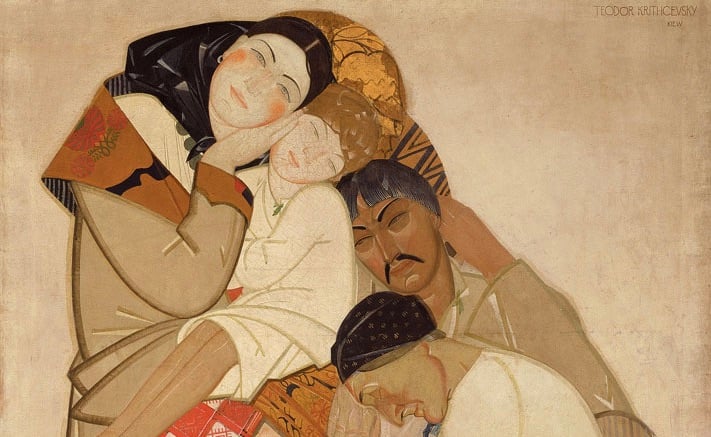 This is the tragic tale of a handsome, romantic refugee who died in terrible circumstances. However, it is also the magnificent story of one of the most influential Ukrainian modernist painters, who, against all odds, recorded the history and the heritage of the Ukrainian people. Meet Fedir Krychevsky.

Fedir Krychevsky lived through two World Wars and the Revolutions of 1905 and 1917. He saw the emergence of an independent Ukraine but then witnessed it being crushed by the Soviet Union.

This prolific painter was born in 1879 in North-East Ukraine. His father was a doctor of Jewish descent, his mother was an Orthodox Christian. His older brother Vasyl was a celebrated graphic designer and architect. Krychevsky studied at the Moscow School of Painting, Sculpture and Architecture, and later at the Saint Petersburg Academy of Arts. He even studied briefly with Gustav Klimt in Vienna.

During his studies he became great friends with another student, Ivan Myasoyedov. They would spend summers with Ivan’s father, the artist Grigoriy Myasoyedov, following a strict routine of early rising, gymnastics, and healthy eating. This system is a practice from classical antiquity – and these two young artists even went as far as wearing Roman togas! They would tour villages, painting young peasant women.

The Teacher of Kyiv

In later life, Krychevsky settled in Kyiv and worked at the Kyiv Art School. He was one of the founders of the Ukrainian Academy of Arts in 1917. He was a well-respected and much-loved tutor. Always inspired by the vivid colors of the decorative folk art of his people, he would tell his students tales of childhood visits to local fairs and markets, where folk music played and traditional textile and ceramic crafts were sold.

Unfortunately this was an unsettled time in Europe. World War I raged across the continent, and Ukrainians were split into two opposing camps. Most fought with the Imperial Russian Army, but some supported the Austro-Hungarian Army. Both soldiers and civilians suffered huge losses as Ukrainians fought each other. As for Russia, after two successive revolutions and bloody civil war, Russia abolished its monarchy and adopted a socialist form of government. The Russian Empire transformed into the USSR, and the Soviets wanted Ukraine.

Surprisingly, amidst all this turmoil, the 1920s was a golden period for Ukrainian painting, called by some the Ukrainian Renaissance. The downfall of the Russian empire and the establishment of an independent Ukrainian state led to an astonishing outpouring of literary and cultural activity across the country.

This was sadly short-lived and by the end of that decade the sovietization, or Russification, of Ukraine was in full force. Creative freedom was severely curtailed in what became known as the Executed Renaissance. Ukrainian language, culture, and heritage were systematically and deliberately erased. Thousands of Ukrainian writers and artists were arrested or shot during the Stalinist purges of 1930-1940. Stalinist collectivization and industrialization swept across Ukraine, and art was no exception. The Soviets insisted on Socialist Realism, a highly regulated art style, meant to promote an idealized image of the USSR.

The ideological constraints of Socialist Realism changed how Krychevsky could work and he struggled to find a place in this newly forged Communist art world. His work was a fascinating fusion of folk art sensibilities, Art Nouveau, modernism, and sacred icon paintings. His love for Ukrainian heritage was evident in every piece. As a staunch defender of Ukrainian culture, Krychevsky was a thorn in the side of the Nazi and Stalinist regimes, but he remained in Kyiv through the brutal Nazi occupation. Ukraine’s losses during World War II were staggering, between five and seven million Ukrainians died fighting Nazi Germany, and most of Ukraine’s 1.5 million Jews were killed.

In 1943 Krychevsky moved to Konigsberg to be with his brother Vasyl. An attempt to flee to the West resulted in him being seized by the Russian KGB and interrogated. In 1944 he returned to his beloved Kyiv, but as an internal exile. His health and his spirit broke. After three years of extreme hardship in Irpin, a suburb of Kyiv, he died of starvation during the 1947 famine.

A Guardian of Ukrainian Culture

More than a decade later, after the death of Stalin, many artists were “rehabilitated”. This was a process of restoring them to the public eye that continued through to the 1980s. However, by this point so many artists had died or been executed, their artworks lost or forgotten.

Throughout his career, Fedir Krychevsky guarded and celebrated Ukrainian national culture and identity. In the end, it cost him his life, but he left us with some astonishing art.

Mykola Pymonenko (1862-1912) was a Ukrainian Realist painter. He spent almost his entire life in Kyiv and dedicated his career to painting genre...

Every once in a while there appears a piece of news describing a quirky, unknown, or forgotten occupation. Sometimes it’s the lightkeepers in a...