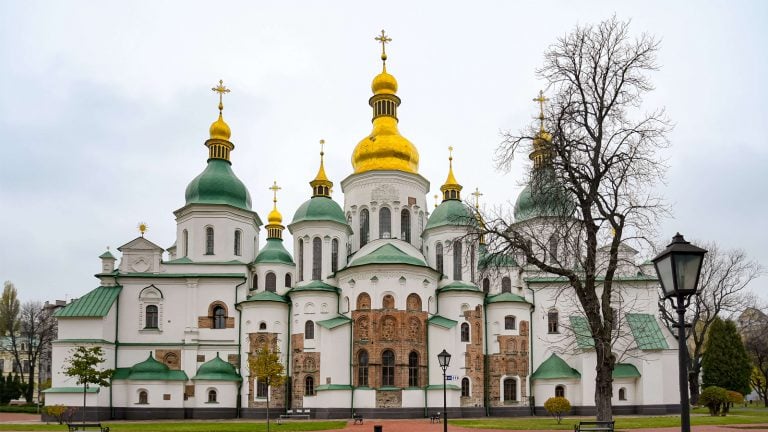 House with Chimaeras: Facts and Legends About an Unusual Art Nouveau Building in Kyiv

Saint Sophia, a stunning 11th century cathedral in Kyiv, Ukraine, is a monument of the time when Kyiv was the capital of the massive empire called Kievan Rus’. Its present status following the recent Russian invasion of Ukraine is unknown.

The Cathedral of Saint Sophia was constructed between 1011 and 1018 CE under two major rulers of Kievan Rus’, Prince Volodymyr Svyatoslavych (r. 980-1015) and his son, Prince Yaroslav the Wise (r. 1016-18 & 1019-54).1 The former had been the leader responsible for first converting Kievan Rus’ to Orthodox Christianity in 988-9; legends tell of mass Baptisms in the Dnieper River.

After converting, Volodymyr established close ties with other Christian nations, especially the Byzantine Empire. It is believed that Byzantine artists worked on the construction and decoration of Saint Sophia. Kievan Rus’ was the region’s political, economic, and artistic powerhouse in the 11th and 12th centuries, and it gained a grand cathedral worthy of that status. This idea of a newer country intentionally styling itself on the model of a more established empire occurred commonly throughout the ancient world and Middle Ages.

Saint Sophia Cathedral in Kyiv has an unusual shape that proved influential. As originally constructed in the Middle Ages, it had a Greek cross shape with five naves crossed by transepts and ending in five altar-containing apses. There were also multiple rows of one and two-story galleries, cross-shaped piers, and 13 domes (some of this changed during later renovations). On the outside, the church has a distinctive pyramid shape created by the descending heights of the domes.

Although the church takes its name from the much-emulated Hagia Sophia in Constantinople/Istanbul, Saint Sophia of Kyiv actually does not have all that much in common with its namesake. Both names mean Holy Wisdom, an important concept in Orthodox Christianity. However, instead of directly copying Byzantine models, Saint Sophia plays with Byzantine architectural vocabulary in its own way. The cross-shaped ground plan was popular in Byzantium at the time, but neither Saint Sophia’s unique take on that form nor its pyramidal profile have Byzantine parallels. They should be considered the results of Byzantine architecture fusing with specifically Ukrainian concerns, rather than imported Byzantine design. Accordingly, its influence appears throughout the Kievan Rus’. Novgorod, for example, boasts its own, simplified version of Saint Sophia.

An Abundance of Decoration

On the inside, Saint Sophia has copious, but not extravagant, decoration primarily dating to the medieval period. The walls contain 3000 square meters of frescoes, while the vaults and domes have 260 square meters of mosaics on gold backgrounds.2 Both types were restored to their former glory in the 19th century, with selective oil painting replacing lost sections. While the frescoes portray a variety of material, the mosaics depict the most significant scenes of Orthodox Christian tradition. These include Christ Pantocrator (Christ the Almighty), Mother of God Orans (Virgin Mary in prayer), the Communion of the Apostles (Christ giving the Eucharist to the Apostles), the Deisis (roundels depicting Christ, John the Baptist, and the Virgin Mary), and the Annunciation. The hierarchical decorative program places the Pantocrator surrounded by Archangels in the highest dome.

The frescoes depict scenes from the life of Christ juxtaposed with scenes of the Rus’ royal family, as well as over 500 saints. A profusion of decoration appears on nearly every surface, as evidenced in this 3D virtual experience.

History shows that the Saint Sophia Cathedral in Kyiv has already experienced plenty of danger and hardship in its long life. Kievan Rus’ fell to the Mongols in 1240 CE, and the cathedral suffered lengthy periods of neglect and decay in the following centuries . On numerous occasions, it narrowly escaped destruction through war and political upheavals.

Yet periods of restoration and renewal have offset these challenges. Saint Sophia Cathedral was once the residence of the Metropolitan, the head of the Ukrainian Orthodox church. It was also a burial site for Kievan Rus’ rulers, including Yaroslav the Wise, and Metropolitans of Kyiv. A few subsequent Metropolitans have taken particular interest in restoring it. Most notably, Petro Mohyla, Metropolitan from 1633 to 1647, founded a monastery on the site. Although this monastery was demolished during the Soviet period, some of Mohyla’s Baroque monastic buildings still exist surrounding the cathedral.

In the 18th century, the cathedral underwent extensive Baroque renovations both inside and out, owing to damage and partial collapse. The exterior changes, including structural modifications and whitewashing of the walls, formed the Baroque appearance still visible today. These elements make the cathedral a landmark of the Ukrainian Baroque style, a more restrained cousin of Western Baroque. The interior was also whitewashed, but an additional round of treatments beginning in the 19th century restored the frescoes and mosaics to their medieval appearance. The carved and gilded wooden iconostasis (screen for displaying icons) and ornate doors are two remarkable survivals of the Baroque interior.

The Recent Past of Saint Sophia Cathedral

Saint Sophia Cathedral of Kyiv escaped anti-religious destruction during the Soviet period and actually became a center of study and preservation. However, it has not actually functioned as a church since 1934, operating as a museum instead. Saint Sophia Cathedral has been an UNESCO World Heritage Site since 1990, alongside the separate Kyiv-Pechersk Lavra monastery site, and is also considered one of the Seven Wonders of Ukraine.

After having endured so much, we can only hope that this magnificent cathedral, like the Ukrainian people, will survive once again.

The date 1038 sometimes appears for the construction of Saint Sophia, usually for thorny reasons of Eastern European politics. In: “Period of the cathedral construction“. St. Sophia of Kyiv National Conservation Area. Accessed February 28, 2022.