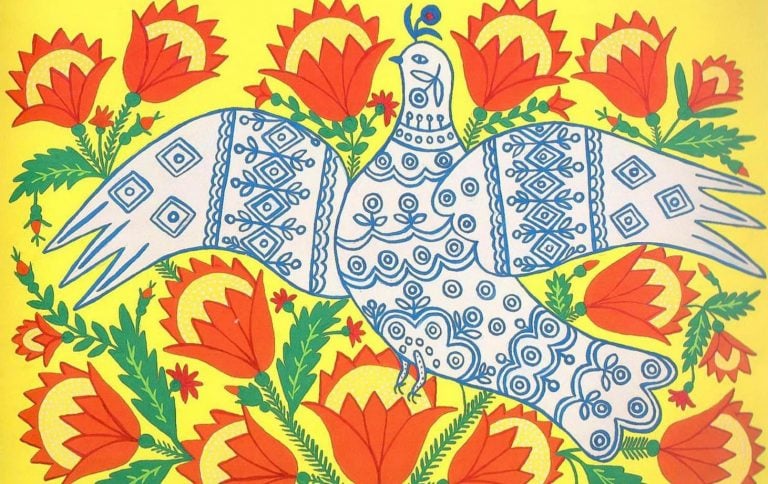 Maria Prymachenko, A Dove Has Spread Her Wings And Asks for Peace, 1982

Have you heard of Maria Prymachenko? She was an internationally acclaimed naïve artist who drew from traditional Ukrainian folk art. What distinguishes her works are bright colors and imaginative ornamental forms often expressing the struggle between good and evil. Following the Russian invasion of Ukraine, the timeliness of her pacifistic works could not have been more powerful.

Prymachenko was born to a peasant family in 1908 in the Ukrainian village of Bolotnia, 30 km from Chernobyl where she spent all her life. Her family taught her a variety of traditional Ukrainian crafts, such as embroidery and decorating Easter eggs. Later in her life she used the traditional Ukrainian patterns and mixed them with her amazing imagination. In 1937 she was awarded a golden medal at the Paris World Fair, where her appearance gathered a lot of attention. Pablo Picasso visiting a Prymachenko exhibition said:

I bow down before the artistic miracle of this brilliant Ukrainian.

The year 2009 was declared the Year of Maria Prymachenko by UNESCO.

In her childhood Prymachenko was taken ill with polio, and this painful disease influenced her life. By reports of her relatives, she grew а thoughtful and considerate person, having compassion for nature and every living thing. Prymachenko herself described the beginning of her artistic call:

Once, as a young girl, I was tending a gaggle of geese. When I got with them to a sandy beach, on the bank of the river, after crossing a field dotted with wild flowers, I began to draw real and imaginary flowers with a stick on the sand… Later, I decided to paint the walls of my house using natural pigments. After that I’ve never stopped drawing and painting.

The works of Prymachenko can be subdivided into thematic, symbolic and ornamental pieces. Her paintings are filled with imaginative details and fantastic creatures. They are beautifully plumed birds and other animals which argue, play music and dine together. She loved colorful symmetrical depictions of decorative floral arrangements.

The important subject of the artist’s works was the struggle between good and evil. It permeates most of Prymachenko’s works, but the good always wins. It is embodied in the images of “kind” beasts and birds (lions, bears, hares, storks, swallows) is juxtaposed against the evil. Even sometimes we don’t see a particular painting as a pacifistic work of art, its title give us no doubt. These anti-war masterpieces and its titles seem to be of special importance now. Prymachenko lost her husband in the World War II; she never remarried. 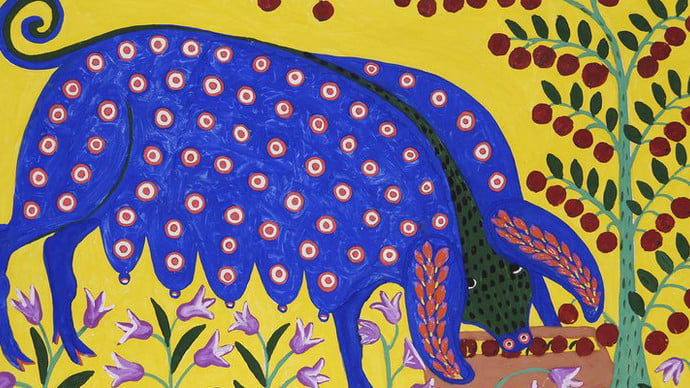 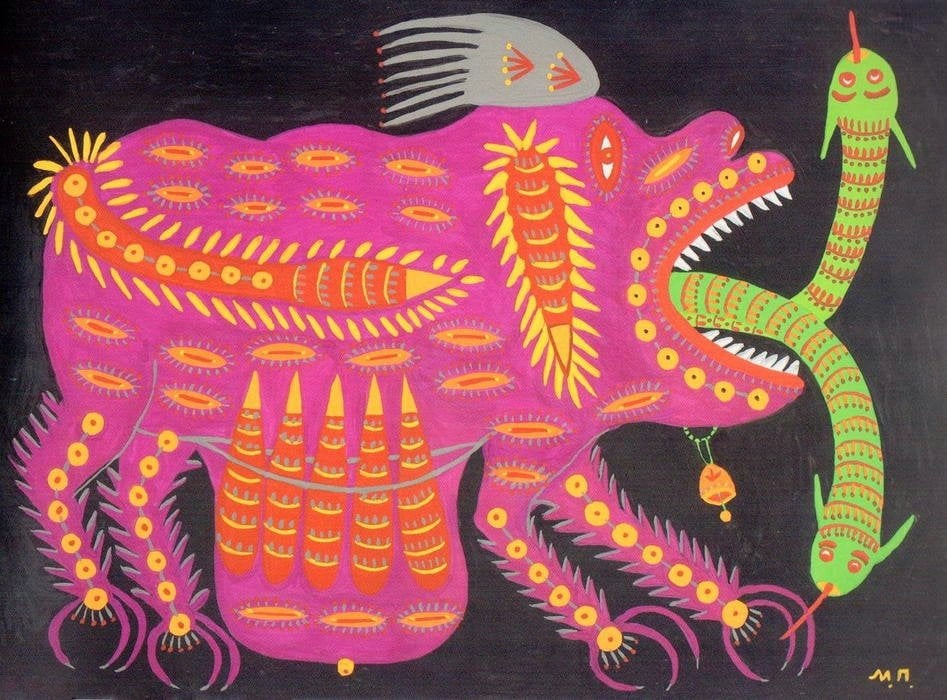 Maria Prymachenko, May That Nuclear War Be Cursed!, 1978. WikiArt. 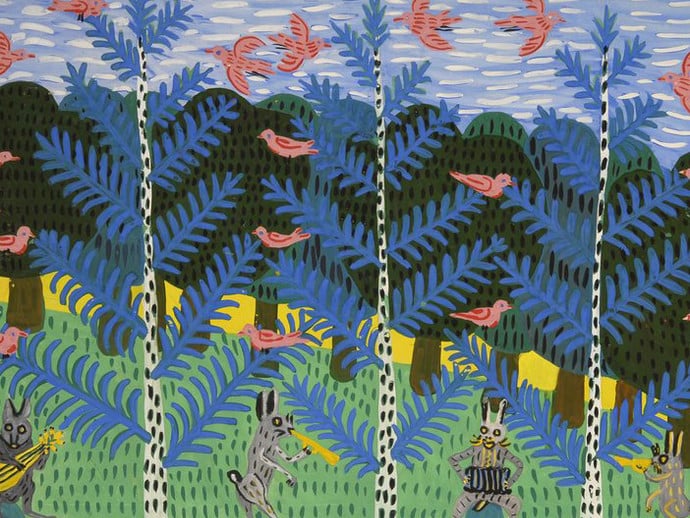 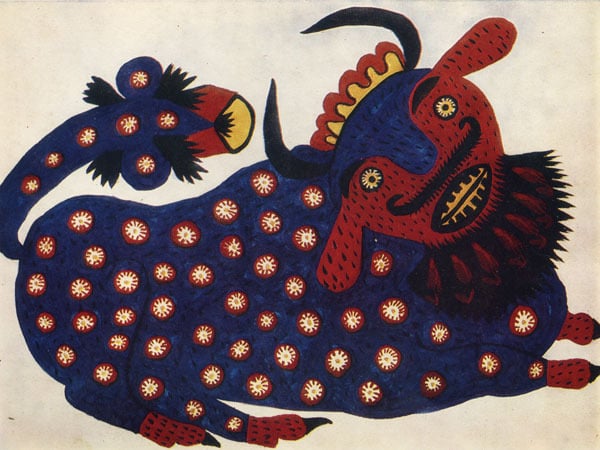 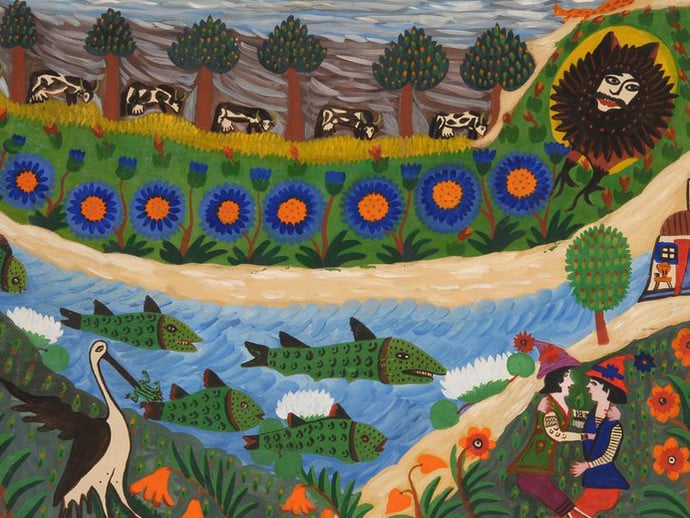 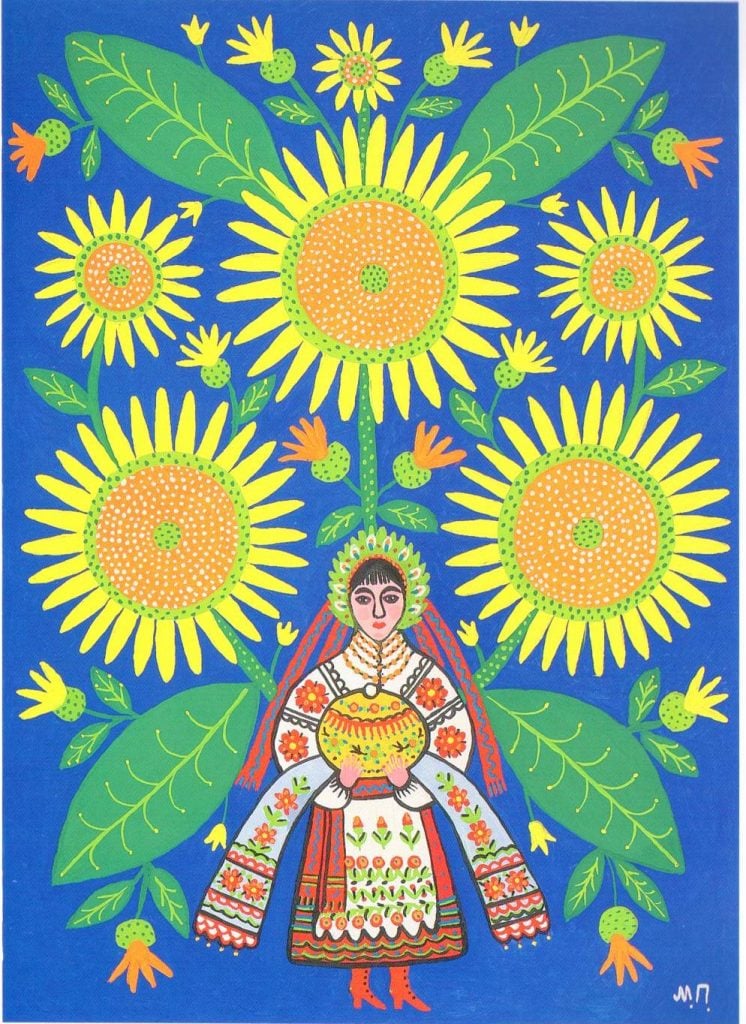 Maria Prymachenko, May I Give This Ukrainian Bread to All People in This Big Wide World, 1982. 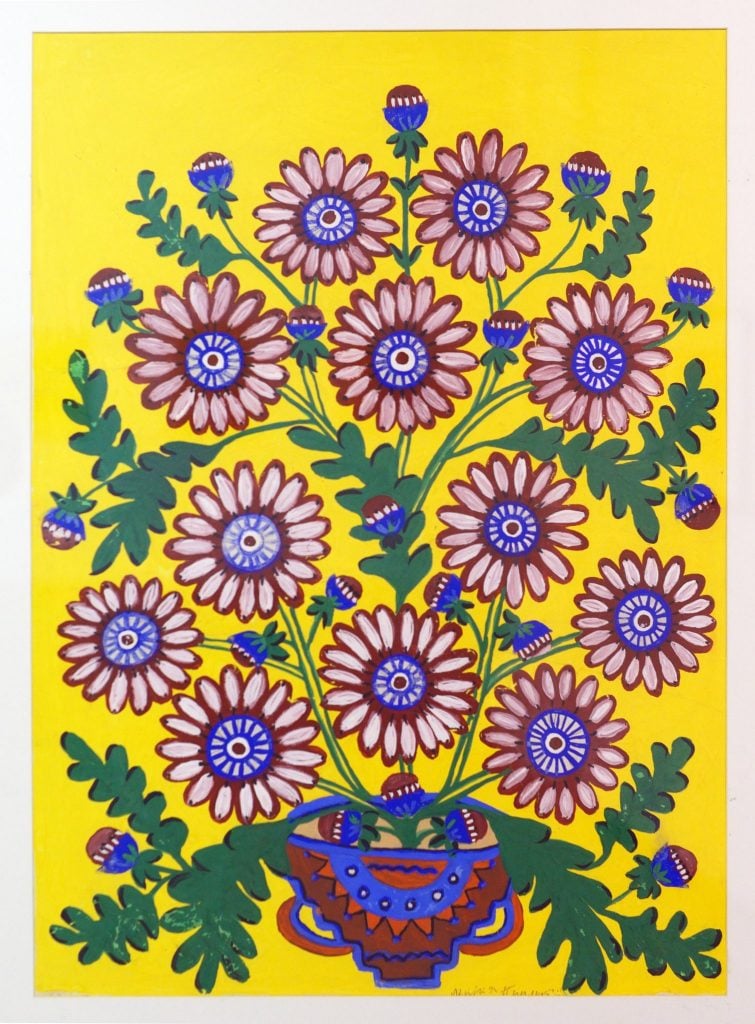 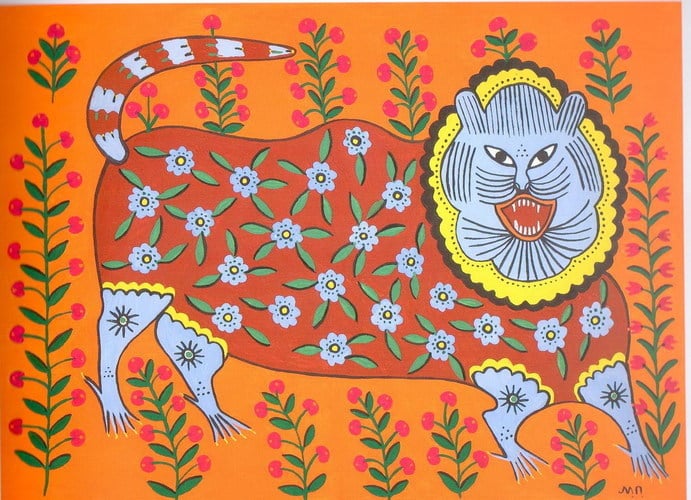 An artwork from the National Museum of Ukrainian Folk Decorative Art.

May That Nuclear War Be Cursed!

The important subject of the artist’s works was the struggle between good and evil. It permeates most of Prymachenko’s works, but the good always wins.

Spring Revels of Hares and Birds

The works of Prymachenko can be subdivided into thematic, symbolic and ornamental pieces. Her paintings are filled with imaginative details and fantastic creatures.

Prymachenko’s creatures are beautifully plumed birds and other animals which argue, play music and dine together. She loved colorful symmetrical depictions of decorative floral arrangements.

A landscape painting from the National Museum of Ukrainian Folk Decorative Art.

A painting by Maria Prymachenko with decorative flowers.

The artist never accepted money for her paintings; she always gifted them to friends and neighbors. Maria Prymachenko died in 1997.

After the Russian Invasion

On Sunday, 27 February 2022, the Ivankiv Historical and Local History Museum in the town of Ivankiv, north of Kyiv, which housed the collection of Prymachenko, has been bombarded by the Russian troops who invaded Ukraine on February 24th, 2022. The local sources said that the building was burnt to the ground. Luckily, according to the great-granddaughter of the artist Anastasiia Prymachenko, some of the 25 works of art created by the artist that had been stored in the museum were saved by a local man who ran into the burning building.

The National Museum of Ukrainian Folk Decorative Art in Kyiv hosts another large collection, consisting of around 650 pieces of artists’ works. We hope that the Russians won’t get there.

On 28 February, ICOM-US issued a statement condemning the destruction of the museum, which “illuminates a tangible and irreversible impact of this immoral and unprovoked war”.

In March 2022, Ukraine’s culture minister called UNESCO to revoke Russia’s membership but the plea was unsuccessful.

A history museum in Ivankiv town, Kyiv Oblast, was destroyed by a Russian attack, according to Ustyna Stefanchuk, an art collector. The museum had about 25 works by famous Ukrainian artist Prymachenkoю pic.twitter.com/sVJD8Eru6h