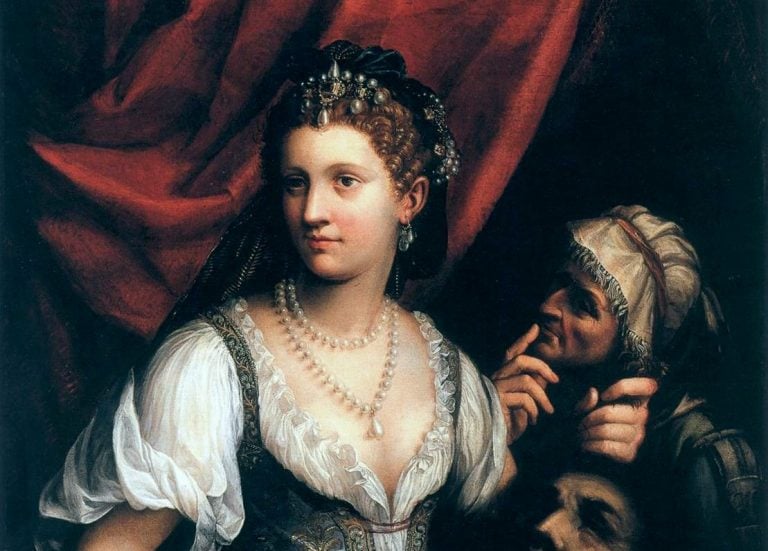 Masterpiece Story: A Glass Compote with Peaches, Jasmine Flowers, Quinces and a Grasshopper by Fede Galizia

Fede Galizia was an Italian early modern painter of still lifes, portraits, and religious pictures. Although she has remained in the shadows for most of history, her painterly style is now associated with the great masters of her time. Since 20th-century scholars discovered her work, she has been credited with helping define the early 17th-century still life genre. And here are some of her most famous works, which have been sold for millions of dollars…

Fede Galizia was the daughter of Nunzio Galizia. She was born in Milan, Italy, sometime around 1578 and died in 1630. While growing up, Galizia learned to paint from her father, a successful miniaturist artist. Remarkably, by age 12, she was an accomplished artist who later established an international reputation during her life. She was even mentioned by the painter and art theorist, Gian Paolo Lomazzo.

Differing from her contemporaries, Galizia produced a diverse collection of work. Rather than specializing in one genre like most 17th century painters, Galizia broke traditional genre standards of the male-dominated art world. Remember, it was extremely rare for a female artist to receive commissions successfully during the Renaissance. Let alone commissions for devotional works and portraits.

Given that Fede’s name means “faith,” it is certainly not a coincidence that she painted religious pictures. Her earliest works were religious scenes: Judith with the Head of Holofernes from 1596 and Portrait of Paolo Morigia painted between 1592-1596.

At 18, Galizia painted the Portrait of Paolo Morigia for the church of San Gerolamo in Milan. In 1670, the portrait was donated to the Pinacoteca Ambrosiana art gallery, where it still hangs. The portrait’s subject is the Jesuit Paolo Morigia, a historian and scholar who was one of her earliest known patrons. In this particular portrait, Morigia is seated at his desk writing lyrics of madrigal (a medieval poem). In his left hand, he holds spectacles reflecting windows unseen to the viewer. By employing mimesis (imitation of reality), the reflection of the windows shows Galizia’s knowledge of contemporary Flemish art. The Portrait of Paolo Morigia planted the seeds of success for this young female painter.

However, during the 16th century, it was uncommon for a father to train his daughter in the arts as it was a male-dominated field. Galizia’s father might have been inspired by the life of Sofonisba Anguissola, an Italian woman artist famous during the Renaissance. Anguissola lived only 50 miles from the city of Milan in the small town of Cremona. However, unlike Anguissola, scholars did not discover Galizia until the 20th century. Perhaps this was due to her inaccessibility to aristocratic circles and her disinterest in patronage from political rulers and courts.

Galizia still received portrait commissions like the one featured above displaying Federico Zuccari. She also excelled during her lifetime through the patronage of local Milanese churches and religious works.

2. Judith with the Head of Holofernes

Attesting to her diverse range of work is the portrait, Judith with the Head of Holofernes, currently on display at the Ringling Museum in Florida. Deriving from the deuterocanonical Book of Judith, the narrative involves the Assyrian general Holofernes and a Jewish widow named Judith. As the story goes, Holofernes wanted to destroy the Jews of Bethulia and became fixated on Judith. When Judith was invited into his tent, she and her maidservant decapitated Holofernes with his sword.

The portrait is astonishingly naturalistic and looks as if Caravaggio himself painted it. Some scholars even believe it is a self-portrait of Galizia through her depiction of Judith. Galizia’s delicate treatment of jewelry and clothing made her an engaging portrait painter. It is a shame that the royal courts of Europe never requested her work (or that she denied it). Although Galizia was famous for her portraits and religious paintings during her lifetime, today, she is known for her simplistic still life paintings of fruit.

Seen through her portraits and still lifes, Galizia’s attention to detail and close observation of the natural world brings her objects to life. As you will recognize in the following still life paintings, Galizia implemented light and shadow techniques to exude the dimensional elements of fruit. Although Galizia’s still lifes were unknown until recently, they are now being compared alongside Clara Peeters’ works as playing a vital role in developing the new genre.

In Italy, still lifes of fruit were uncommon until the end of the 16th century. The earliest known fruit still life made in Italy was Basket of Fruit by Caravaggio between 1595 and 1596. During this time, Galizia most likely painted her Glass Tazza with Peaches, Jasmine Flowers, and Apples dated 1607 as well as Glass Tazza with Peaches, Jasmine Flowers, Quinces and a Grasshopper from 1610.

Around 20 still lifes by Galizia are known today, making her fruit and flower pieces rare and significant as they represent her most important contribution to art history.

Still Lifes Through the Ages, catalogue, 2019.

3. Glass Tazza with Peaches, Jasmine Flowers, Quinces and a Grasshopper

However, Galizia’s most famous still life painting is Glass Tazza with Peaches, Jasmine Flowers, Quinces and a Grasshopper. Painted towards the end of her life in 1610 and repeated at least four times, this is the only composition that features a grasshopper. According to Sotheby’s website, the auction house sold the painting in 2006 for approximately 3 million dollars.

The grasshopper might seem like an odd addition to a fruit still life painting, but its presence is linked to Christianity, death, and the arrival of spring. Suppose its placement in the painting is significant. In that case, the grasshopper probably suggests the frailty of human life and the fear of sin due to its position next to a cut quince rather than on the opposite side, where the fresh quinces are still intact. The reason for the grasshopper’s presence within the painting may never be known for certain.

Last, but certainly not least, is Galizia’s White Ceramic Bowl with Peaches and Red and Blue Plums. The still life painting was sold in 2006 by Christie’s for an estimated 825,000 USD. In its first publication in 1978, Professor Mauro Natale regarded this work to be Galizia’s “most outstanding works.” Through its iconic arrangement of fruit and simplistic characteristics, the painting became the image featured for the Italian Still Life Paintings from Three Centuries show in 1983.

Since Fede Galizia’s still life paintings were discovered, her work has been featured in exhibitions all over the world.