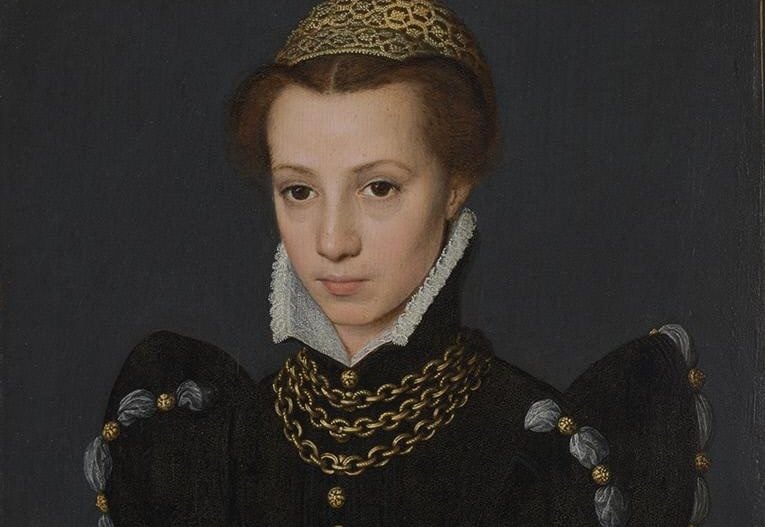 Do you know which artist created the very first self-portrait depicting themselves at work? Let me introduce you to Catharina van Hemessen. She was also the first female Renaissance artist who signed and dated her work. Talented in making small portraits of women, her attention to detail was impeccably delicate compared to the known masters of portraiture.

In 1528, Catharina van Hemessen was born in Antwerp (today’s Belgium). Luckily, she was the daughter of distinguished Mannerist painter Jan Sanders van Hemessen. Growing up, her father taught her how to paint, eventually leading her to become a master in the Guild of Saint Luke.

Today, there are about ten paintings attributed to Van Hemessen: eight portraits and two religious works. However, she is best known for her small-scale portraits of women completed between the late 1540s into the 1550s.

Here is a list of her famous works and where you can find them today!

At 20 years old, Van Hemessen painted this self-portrait that is now at the Kunstmuseum Basel in Switzerland. In this painting, she is seated at an easel with her gaze falling upon the viewer. Yes, the composition of this work certainly feels eerie with the stark background and muted colors; however, the artist strategically implemented her artistic knowledge to appeal to contemporary patrons. She did this by including her creative tools in the work, such as the painter’s stick and the palette.

Little did she know this piece would become the oldest surviving self-portrait of an artist (male or female) actively painting in Western art. While other artists at this time, such as Albrecht Dürer, painted self-portraits, Catharina van Hemessen was the first to paint herself demonstrating her skills.

Throughout her career, Catharina van Hemessen was interested in painting women enjoying an activity. Here is another example of her work at the Wallraf-Richartz Museum in Cologne, Germany. Presumably, the portrait illustrates her sister, Christina, playing a virginal, a popular keyboard instrument during the Renaissance.

What makes this painting intriguing is how lifelike her sister appears. Her rich velvet sleeves and white headdress illuminate the picture. Upon closer look, Van Hemessen has positioned her sister not just sitting next to the virginal but playing it, as if the viewer is there in real-time. According to art historians, the skill of playing this instrument identifies her as an upper-class, educated woman.

3. Portrait of a Woman

As you may have seen from the previous two images, the artist distinctively signed her name and date on the canvas in the corner of each painting. Catharina van Hemessen also holds the title of the first known South-Netherlandish female painter who signed and dated her work.

The Rijksmuseum curators believe this particular portrait is another self-portrait. There is no proof to this assumption, but the young woman’s features resemble that of Van Hemessen’s. Regardless, the portrait stands alone as a magnificent illustration of the artist’s painterly skill and the subject is actively playing with the ring on her finger.

4. Portrait of a Lady

Another portrait by Van Hemessen depicts a woman playing with a ring on her finger. While much less is known about this painting, such as the sitter herself; stylistically, this portrait showcases her evolution as an artist. Notice the shadow in the background and the realistic way she has painted the woman’s face and clothing to create a visually appealing work of art. This portrait is held at the Bowes Museum, in the town of Barnard Castle, UK.

Not only did Van Hemessen have a successful artist as a father, but her mother also came from a wealthy family of cloth merchants. Therefore, it is not surprising that she had the privilege to sign and date her work as a female artist at this time.

5. Portrait of a Woman with a Dog

We can all agree that Catharina van Hemessen was a fantastic painter from her previous works. However, you might be surprised that she also kept up with the trends in portraiture. For example, in this work on view at the National Gallery in London, she paints a wealthy woman and her dog. During the 16th century, portraits of women and their pets were in vogue. As an artist, she would have wanted to keep up with the trends of her contemporaries.

The details of this work are extraordinary. Delicately laying on the unknown sitter’s chest is an embroidered black shirt. She also wears red velvet sleeves, a silk bodice top, and a full skirt made of damask (a reversible pattern of silk or wool). Between the woman’s arm is a dog wearing a detailed collar of bells, and the sitter is holding a pair of leather gloves decorated in gold.

6. Portrait of a Young Lady

At the Baltimore Museum of Art in the United States is Van Hemessen’s most puzzling work of art. Since there is no signature or date painted on the canvas, she is only presumed to be the artist.

This painting is also confusing due to the attributed date, because in 1553 Catharina van Hemessen married the organist Kerstiaen de Morijn. Two years later the couple was invited by Mary of Hungary to join her at the Habsburg court in Spain. They remained there until Mary’s death in 1558, with records that mention their return to Antwerp in 1561.

According to art historian, Céline Talon, the lack of work attributed to the artist is due to her short-lived career. Like many other female Renaissance artists, there are no further works after her marriage. Therefore, in 1560, Van Hemessen’s career as a painter was nonexistent, although new works of art are attributed to her every day.

Perhaps this final portrait was made by Van Hemessen, since she was well-known even after her death in 1565, thanks to the famous Italian writers Lodovico Guicciardini and Giorgio Vasari, who mentioned her name in their works from 1567 and 1568. As a result, Catharina van Hemessen’s name was spread far beyond the Low Countries.

Where Else to Visit Van Hemessen’s Artworks

Catharina van Hemessen’s portraits can be found at museums worldwide.