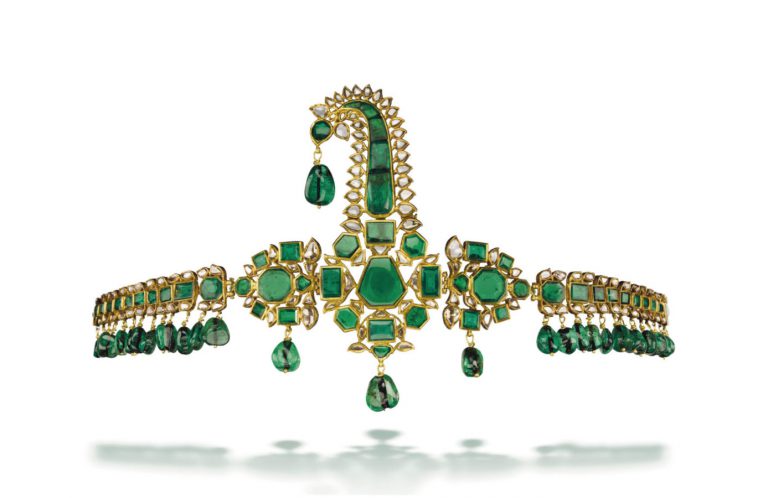 Emeralds are arguably the most beautiful of all gemstones and have been revered by many cultures all over the world. Though the largest emeralds come from Colombia, it is believed that the first known emeralds were mined in Egypt around 330 BCE. The stone has held special religious significance in many traditions since antiquity, it has been mentioned in ancient Hindu scriptures and in the Bible and has also commanded a place of importance in Islam. Emeralds were immensely popular amongst the great Islamic dynasties of the Persian Safavids, the Turkish Ottomans and the Indian Mughals.

By around the 15th century, the Portuguese traders and the Spanish Conquistadores were conducting regular expeditions to South America, which opened up the trade from the Colombian mines to the rest of the world. Since then, this beautiful gemstone has been fashioned into breathtaking works of art, both in carved and embedded form. Here is a look at ten of these artefacts from around the world.

This exquisitely carved stone originated from the Mughal period, during the reign of Aurangzeb. It weighs a whopping 217.80 carats and is one of the foremost examples of emerald artifacts of all time. The color green holds a special significance in Islam and this stone was likely used as a talisman or a taveez. There is a Shi'a prayer inscribed in the naskh script on one side, and on the reverse side is a delicate floral pattern. Since Mughal Emperors and Aurangzeb in particular were devout Sunni Muslims, it is believed that the stone may have belonged to a wealthy Deccani or Persian courtier in Aurangzeb's administration. In 2001, the Mogul Mughal Emerald sold for over $2 million at Christie's London auction. It is now on display at the Museum of Islamic Art in Doha, Qatar.

This beautiful gold pendant with a large hexagonal emerald was at one time the property of the family of Frederick Duke of York. The emerald is surrounded by a frame with a floral pattern of colorful gemstones alternating with six diamonds. All the gemstones, including the large emerald, are in the table-cut form, which was popular from the 16th to 18th centuries. The stone was acquired into the Royal collection in 1916 by Queen Mary, the consort of King George V. The inscription on the reverse is a facsimile of the signature of Queen Elizabeth I.

Kundan jewelry originated in the royal courts of Northern India around the 3rd century BCE. The word Kundan means highly refined. Kundan is easily identifiable by the look of refined molten gold foil between the stones and its mount. It became very popular after the 14th and 15th centuries and flourished under the patronage of both Mughal and Rajput royalty. Even today, Kundan remains an integral part of a South Asian brides' wedding trousseau. This emerald, gold, and pearl brooch is another Mughal masterpiece from the 18th century with a sizable table-cut emerald as the centerpiece and three smaller carved emerald accents below.

4. The Crown of the Andes

Though more gold than emerald, the crown of the Andes is a notable example of emerald artifacts because of its fascinating origins — the crown came into existence as a result of a community offering. When smallpox plagued the Americas around the year 1590, a small community of people in Popyán, Colombia were persuaded by their local priest to stay and pray to the Virgin Mother for protection. The people of Popyán were spared from the plague and the grateful community donated the gold and the emeralds to create this beautiful crown to honor the Virgin Mary. The largest emerald in the crown weighs 45 carats and the crown was last estimated at $2.5 million. It is now on display at the Metropolitan Museum of Art in New York City.

Originally from the mines of Colombia, the Chalk emerald has journeyed long and far around the world. The stone originally weighed 37.8 carats and lay embedded in an elaborate diamond necklace owned by Maharani Sita Devi of Baroda in Northern India. After a devastating divorce, it landed in the hands of the celebrated American jeweler, Harry Winston where it was recut and set in its current form — a platinum and gold ring surrounded by small diamonds totaling 15 carats. Finally, in 1972, it was donated to the Smithsonian by Mr. and Mrs. O. Roy Chalk. Other than its impressive size, the Chalk Emerald is also well known for its impeccable clarity and rich color.

6. Necklace and Earrings of the Empress Marie-Louise

These incredible earrings and necklace were once part of a larger set that also included a tiara and a comb. It was a wedding present from Napoleon I to his wife Archduchess Marie-Louise of Austria. Although the stones in the tiara and the comb were re-set and transformed, the necklace and earrings have been preserved in their original state and are now a part of the Louvre's collection. The necklace comprises about 32 large oval and lozenge-shaped emeralds surrounded by around 1000 diamonds of varying sizes.

Worn by Hindu and Islamic royalty alike, sarpech or turban ornaments were popular around the 19th century. In South Asia. They were elaborate ornaments with intricate designs, usually in the Kundan style. This sarpech was commissioned in Udaipur in Northern India. It was presented to King Edward VII, when he was the Prince of Wales, during his tour of India in 1875 by the Sajjan Singh, the Maharana of Udaipur.

This elaborate gold belt or girdle is fashioned in the Mughal style. It has 18 sections separated by gold links, embellished with several large emeralds of various sizes and clarity and pearl embellishments on the borders. The stones are from either the Urals or the Afghan region. The belt was made for Maharaja Sher Singh of the Sikh Empire, with stones that were inherited from his father Maharaja Ranjit Singh. It was appropriated in Lahore by the East India Company and was eventually presented to Queen Victoria in 1851.

This highly prized oval cabochon emerald weighs 30.60 carats. The stone bears an inscription with Shah Jahan's name, dated prior to his accession to the Mughal throne in 1628. It is believed to have been commissioned during Shah Jahan's unsuccessful rebellion against his father, Jahangir. Shah Jahan was an avid collector of large and highly-prized gemstones and like many royals, was partial to emeralds. A British trader who stayed at the Mughal palace in Agra around 1610 reported that Shah Jahan had more than half a million carats of emeralds in his treasury, mostly from Colombian mines. Many were later embedded into the famous Peacock Throne.

This brooch features a large beveled square-cut emerald as its center stone encased in an elaborate platinum halo with 109 round and 20 baguette-cut diamonds of around 13 carats in total. The emerald once belonged to Sultan Abdul Hamid II of the great Ottoman Empire. This Colombian stone is not only an impressive size at 75.47 carats but also has exceptional color and clarity. It was purchased at an auction by Tiffany & Co in 1911 and set in a tiara. In 1950 it was re-cast into its current form. Mrs. Janet Annenberg Hooker, a wealthy American philanthropist purchased the brooch from Tiffany in 1955 and donated it to the Smithsonian in 1977. The stone, now known as the Hooker Emerald is on display in the Gem Gallery at the National Museum of Natural History in Washington DC.

Did you know that the Arts and Crafts Exhibition Society which was founded in 1887 by William Morris and Walter Crane is still thriving today?...

Famous Chairs that Changed the Way We Sit

Apparently sitting is the new smoking and it will slowly kill us all. But given our current reality, we don’t have that much choice about it. One...

The word ‘contemporary’ can be defined in many subtly different ways. For this text allow me to stick to the following definition: “the second...