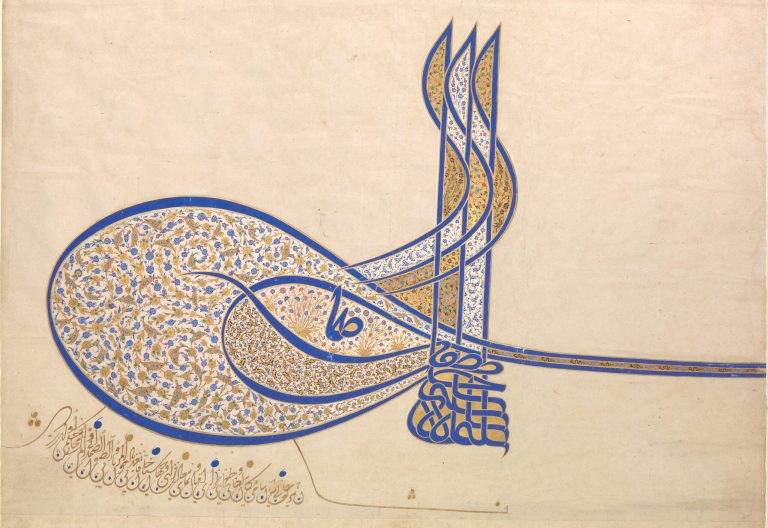 During the 16th and 17th centuries, The Ottoman Empire reached the height of its powers and extended into several continents, crossing nations and languages. It encompassed the northern shore of Africa, the Middle East, and southeastern Europe. Ruling at the pinnacle of this vast and wealthy empire was the sultan, and its most famous sultan was Süleiman the Magnificent. He was a fabulous patron of the arts, and Tughra of Sultan Süleiman the Magnificent is one of his many examples. Let us explore this Ottoman image. Let us explore this Ottoman painting.

However, unlike a European crown or throne that may remain constant through many successive reigns, the tughra was personalized for each Ottoman sultan. The Ottoman sultan would design his own version of the tughra on his ascension and would use this personal tughra consistently throughout his reign. The tughra featured here is the Tughra of Sultan Süleiman the Magnificent and it is truly magnificent in its design!

The elaborate design of Tughra of Sultan Süleiman the Magnificent is developed through the use of cobalt blue ink; watercolors of cerulean blue, rose pink, and moss green; and gold leaf. Horror vacui, or fear of the empty, is used throughout the composition as every space is filled with flowers, leaves, and spirals. There is barely any negative space within the tughra.

However, the organic motifs do not render the tughra as too busy or jarring to the eyes. Actually, the delicate blossoms and fronds contrast nicely with the bold strokes of the ink brush. They add a sense of scale to the work allowing the blue lines to seem bolder and more powerful when compared to the dainty patterns. Harmony is achieved through its sympathetic patterns and complementary colors.

The use of roses, carnations, saz leaves, and plant scrolls makes the Tughra of Sultan Süleiman the Magnificent a perfect example of the Saz Style. The style was popular in 16th century Ottoman art, and is known for its vibrant floral compositions against pale backgrounds. The splendor of the style is added by an Arabic inscription appearing on the bottom left corner. It is written from right to left and it can be translated into English as “Sultan Süleiman, son of Sultan Selim Khan, ever victorious.” It highlights Süleiman the Magnificent’s lineage through his father while praising his own glorious reign. It also adorns the page with pure elegance in gold.

There is an ancient Arabic proverb that states, “Purity of writing is purity of soul.” Perhaps when Süleiman the Magnificent commissioned his tughra, he was trying to achieve purity of soul. No matter the intentions, the sophisticated Tughra of Sultan Süleiman the Magnificent is a powerful symbol of the once mighty Ottoman Empire. It is an Ottoman image, an Ottoman painting.

Denny, Walter B., “Tughra of Sultan Süleiman the Magnificent”, The Metropolitan Museum of Art. Accessed April 12, 2020.