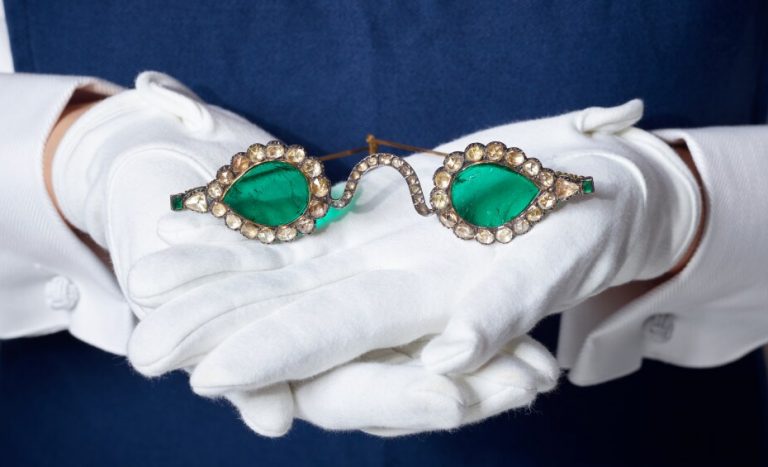 In the past years, there have been a couple of absolutely enthralling and profoundly desirable items that made great waves on the antique jewelry market. These works are not just exceptional due to their skilled craftsmanship or great monetary value but also because of their unique history. The items on our imaginary wishlist are a pair of diamond bracelets, a pearl pendant belonging to Marie Antoinette, and a set of diamond and emerald spectacles from the Mughal dynasty.

These luxurious bracelets belonging to Marie Antoinette, the last Queen of France, are composed of approximately 140 to 150 carats of diamonds. The bracelets feature three rows of 112 old-cut diamonds, including two diamond-studded barrettes that serve as clasps. A bracelet like this constructed today would feature uniformly cut, symmetrical diamonds. However, it is really the irregular antique cut of the individual diamonds that imparts into this exquisite piece of jewelry an incomparable old-world charm.

Marie Antoinette commissioned this piece from her jeweler, Charles Auguste Boehmer, and paid him 250,000 livres (approximately $4.6 million today). Marie Antoinette traded some of her own gemstones at a loss and borrowed 29,000 livres (around $533,000 today) from her husband, King Louis XVI, to afford these bracelets. Letters from her mother reveal her displeasure at Marie Antoinette’s extravagant purchase, but her disapproval did not appear to diminish the Queen’s enthusiasm for her stunning acquisition. The bracelets have also been featured in two paintings. 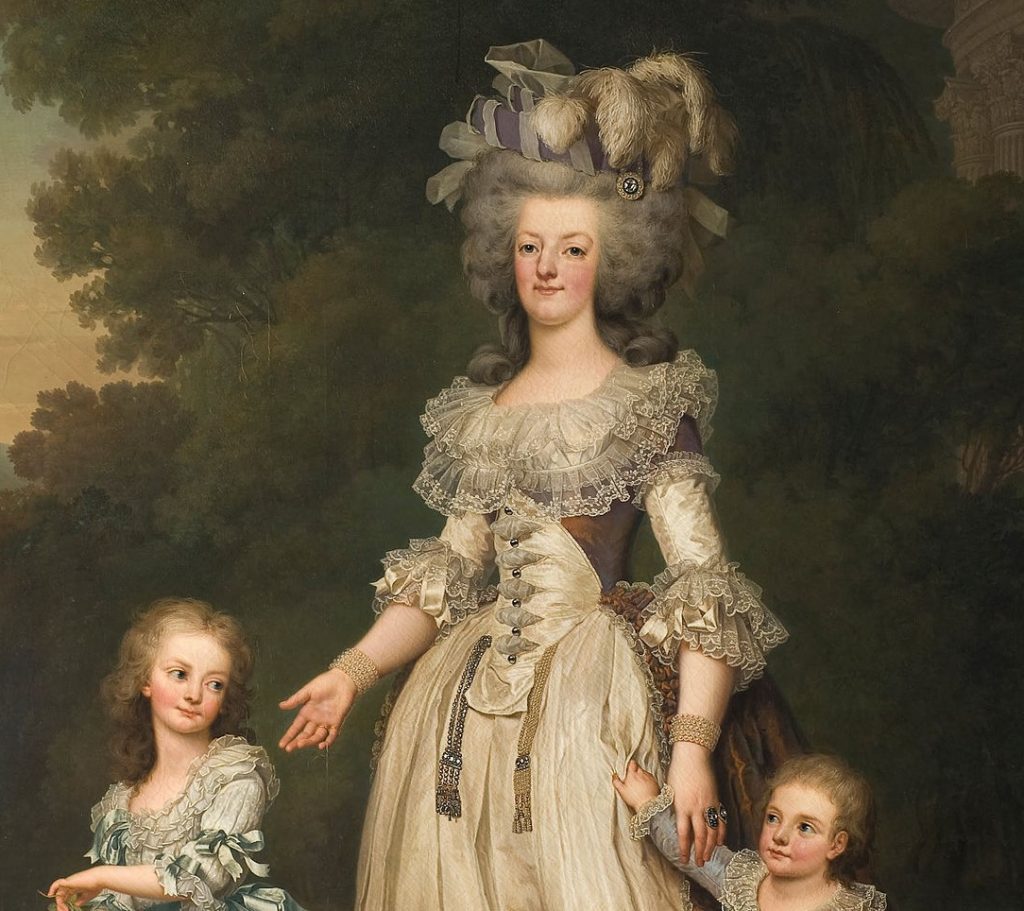 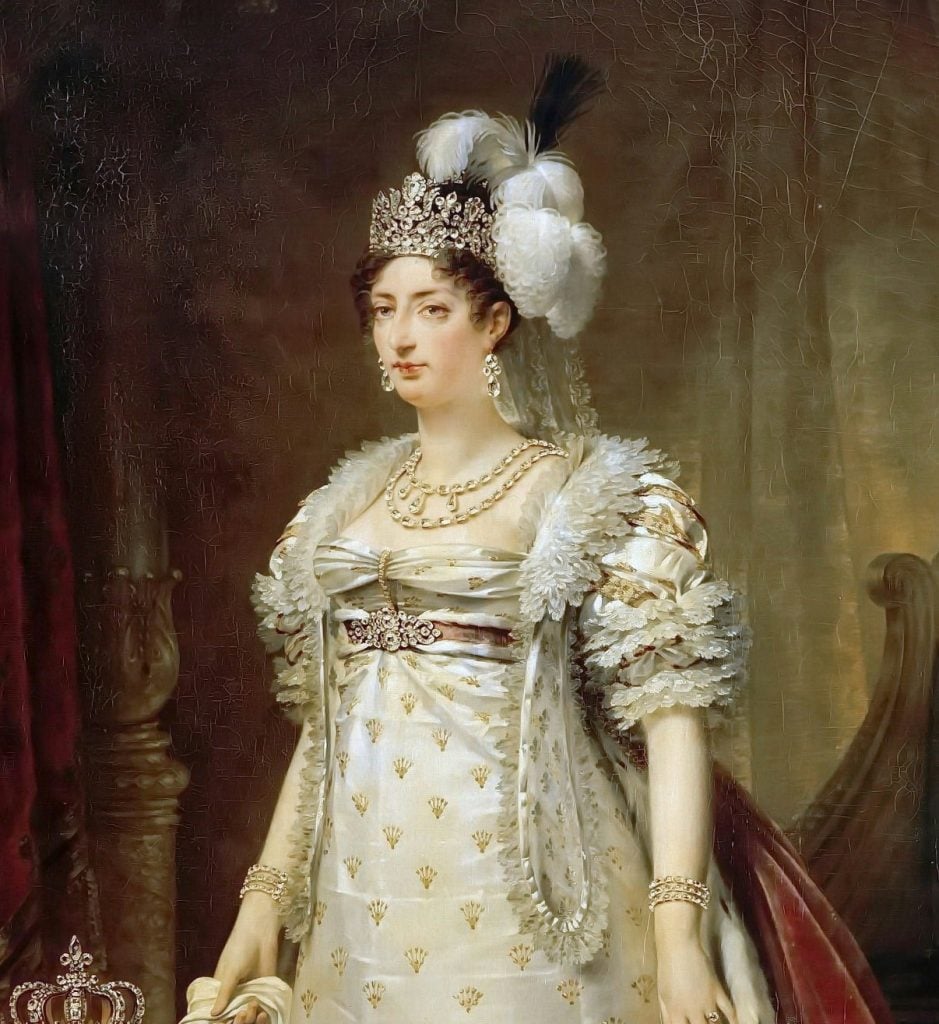 Detail of a painting by Adolf Ulrik Wertmüller featuring Marie Antoinette with two of her children. Her wrists feature diamond bracelets. Note here that the bracelets appear to have four rows instead of three.

Marie-Thérèse Charlotte of France, Dauphine of France and Duchess of Angoulême

This painting is a detail from the portrait of Marie-Thérèse Charlotte, a descendant of Queen Marie Antoinette, wearing diamond bracelets on both wrists.

During the French Revolution, Marie Antoinette sent these bracelets out of France for safekeeping to the former Austrian ambassador, Count Mercy-Argenteau, a loyal friend of the royal family. While many jewels of royal provenance were disassembled and sold over the years, these bracelets are among the exceptional pieces that have remained intact. They were sold by Christie’s in November 2021 for $8.2 million, well over the original estimates.

Both spectacles, mounted with smaller stones, are set in gold and silver frames. These stones have been fastened to the frame with the pachchikam technique. Similar to the kundan technique, such a process involves encasing stones onto gold. The frame is dated to the 19th century, while the lenses were cut earlier in the 17th century during the golden age of the Mughals, either during the reign of Shah Jahan or Aurangzeb.

The flat cut of the diamonds and emeralds that formed the lenses is a remarkable technical accomplishment. As this feat was only possible with a diamond that would have weighed over 200 carats and an emerald of over 300 carats, it also reminds us of the unfathomable wealth and excess of the Mughals! In their reduced form, they are about 25 carats.

We can trace the emeralds to the Muzo mines of Columbia, while the diamonds came from the Golconda mines of southern India. Both stones were chosen for their deeply symbolic connotations in Islamic tradition, with emeralds representing paradise or ferdaws and diamonds representing light or noor. Sotheby’s lists each item on its website for an estimated $1,700,000 to $2,845,000.

The last item on this list takes us back to the collection of the ill-fated Queen Marie Antoinette. It is also among the other priceless royal jewelry that made its way to safety shortly before her own attempt to flee France.

It is a pendant exhibiting a large, natural saltwater pearl measuring 15.90 x 18.35 x 25.85 mm. This exquisite pendant features an oval diamond set over a clasp formed by a hook and hinged back fitting, connected to a bow motif embedded with smaller diamonds below which the pearl is suspended. The pendant was intended to be suspended over a three-strand pearl necklace.

Marie Antoinette owned this pendant alongside a remarkable collection of pearls, which often appeared in paintings. Her daughter, Marie-Thérèse de France, inherited the pendant and then bequeathed it to her niece, Princess Louise Marie Thérèse d’Artois, the Duchess of Parma. The royal jewels remained with the descendants of the Parma family for over 200 years.

Sotheby’s valued the pendant at $2 million ahead of its auction in November 2018 in Geneva. However, it sold for a whopping $36 million, achieving a new record for a natural pearl.

The diamond bracelets that Marie Antoinette had to have — even if it meant borrowing a fortune from her husband. Lot Essay by Christie’s. Accessed on November 03, 2022.