Earthquakes and Art. The Story of the Zagreb Art Pavilion 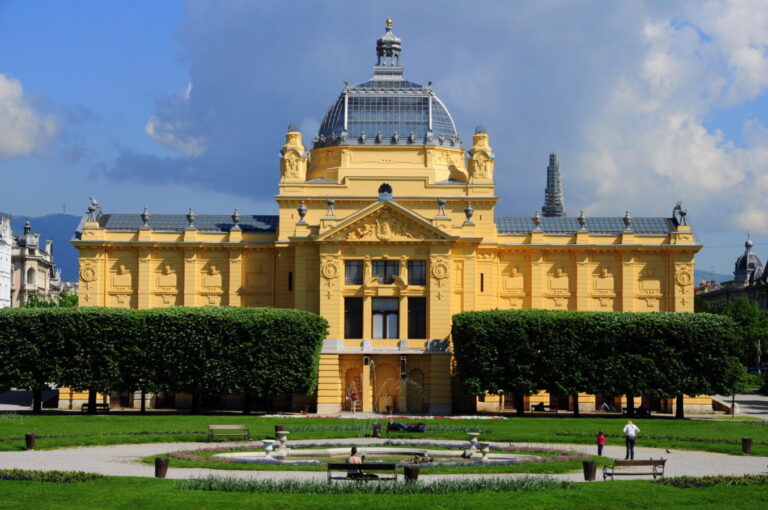 On Sunday, March 22nd, early in the morning a 5.3 magnitude earthquake hit the Croatian capital. People lost their homes and their workplaces. Furthermore, many museums and art galleries suffered great damage. To depict the cultural damage I am going to tell you the story of one of my favorite galleries, the Zagreb Art Pavilion.

The Idea of the Zagreb Art Pavilion

The idea of building an art gallery came from the Croatian painter Vlaho Bukovec in 1895. At the time, Hungary was preparing for a Millennium Exhibition in Budapest in 1896. They also invited artists from the Kingdom of Croatia-Slavonia. Croatian artists decided to present their works in a purpose-built Pavilion. The idea was to construct the Pavilion around a prefabricated iron skeleton. This was so it could easily be shipped to Zagreb after the exhibition ended. The Danubius company built the Budapest Art Pavilion according to the designs of Hungarian architects Korb and Giergl.

After the exhibition, the Art Pavilion’s skeleton was transported to Zagreb. Austrian architects Fellner & Helmer (who were active in Zagreb at the time) designed a new version of the building according to the iron skeleton. The Hönigsberg & Deutsch building company performed the construction. They also decorated the building’s facades with sculptures in the academic art style.

The western facade has busts of Michelangelo, Raphael, and Titian.

The two caryatids at the entrance and all other sculptural decorations also have characteristics of the academic style. However, afterwards allegories of Painting and Sculpture were added on the parapet of the staircase are made in the secession style.

The Purpose of the Art Pavilion

The Art Pavilion is the oldest gallery in Southeast Europe and the only purpose-built gallery in Zagreb. It is designed to accommodate large-scale exhibitions. Besides that, it was the only building of its type until the end of the 1930s in the city. The Zagreb Art Pavilion is located on the Lenuci Horseshoe, south of Nikola Šubić Zrinski Square and north of the King Tomislav Square.

The Zagreb Art Pavilion is the place for hosting one-off solo and group exhibitions representing important oeuvres and art movements from all periods and styles. Throughout its history, the gallery has organized around 700 exhibitions with artists including Auguste Rodin, Andy Warhol, Alberto Giacometti, Alexander Calder, and many others. Thus the pavilion became a monument, a representative urban and cultural object.

The earthquake on Sunday damaged many buildings in Zagreb including the Art Pavilion. In the photos below you can see its current appearance.

Other museums suffered even greater losses, read about them here.

This situation makes me wonder about a few things such as: Can people fix all the damage? How long will it take? Will it affect the meaning? How not to interfere with the essence of someone else’s work? Can people and the city ever return to their lives before the earthquake?

If you want to help the affected people, there is fundraising going on here.