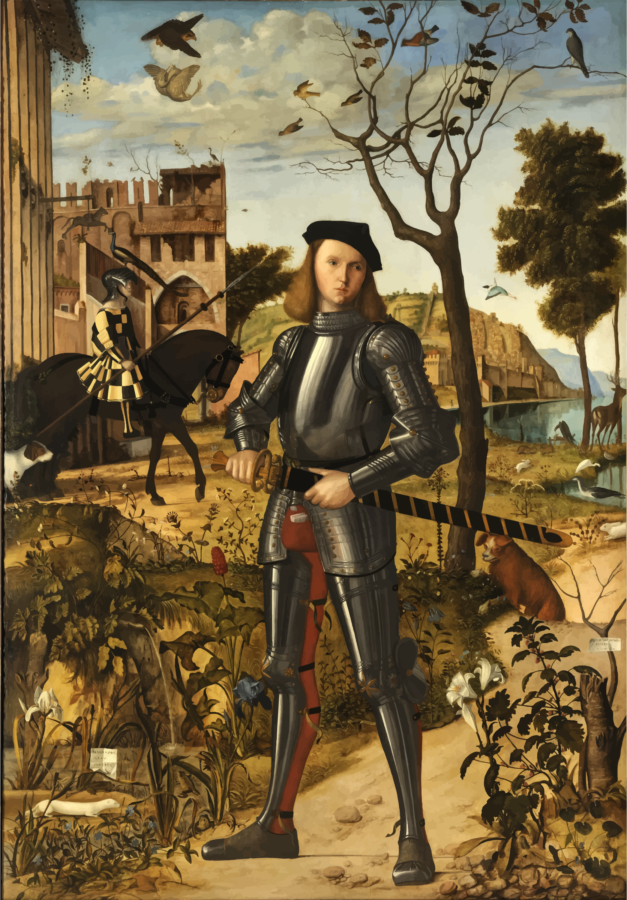 Young Knight in a Landscape by Vittore Carpaccio from the collection of Museo Thyssen-Bornemisza in Madrid is one of the earliest examples of a full-length portrait in European painting. What’s interesting, although the canvas is signed and dated by Carpaccio on a cartellino to the right of the figure, it was attributed to Dürer until 1919.

The motto Malo mori quam foedari which in English means: better to die than be defiled placed beside a short-tailed weasel suggests that he may be a knight of the Order of the Ermine, which was a chivalric order of the 14th and 15th centuries in the Duchy of Brittany (the ermine is the emblem of Brittany). Another hypothesis says, that the knight was in fact Francesco Maria della Rovere, 3rd Duke of Italian city of Urbino.

There are a lot of little details here that are symbolizes the fight of good and bad. Although what they symbolise can change over time, and may also refer to the personal mythology of the family for whom the painting was created. Dogs often represent fidelity but the dog crouching on the path behind the knight wears an expression that may be taken for a snarl.

The hawk knocking another bird from the sky is more obviously a symbol of belligerence which suits the action of drawing a sword. The Young Knight is armored in an armatura alla tedesca, in the style of the first two decades of the sixteenth century. His head is covered with only a small black beret; his helmet-a sallet alla veneziana-and
his gauntlets are in the keeping of his squire, who has put the helmet on his own head and hung the gauntlets from his belt. The knight is shown grasping his sheathed sword. This weapon is a so-called Katzbalger, the typical sidearm of the Landsknechte, German mercenary infantry of the sixteenth century. Also German in style is the squire’s long skirted coat with puffed sleeves.

If you find any joy and inspiration in our stories, PLEASE SUPPORT
DailyArt Magazine with modest donation. We love art history and we want to keep going with writing about it.
$5 $10 $25 $50 $100 MONTHLY
Related Topics:italy, renaissance, thyssen-bornemisza