10 Things You Need To Know About Jan Van Eyck 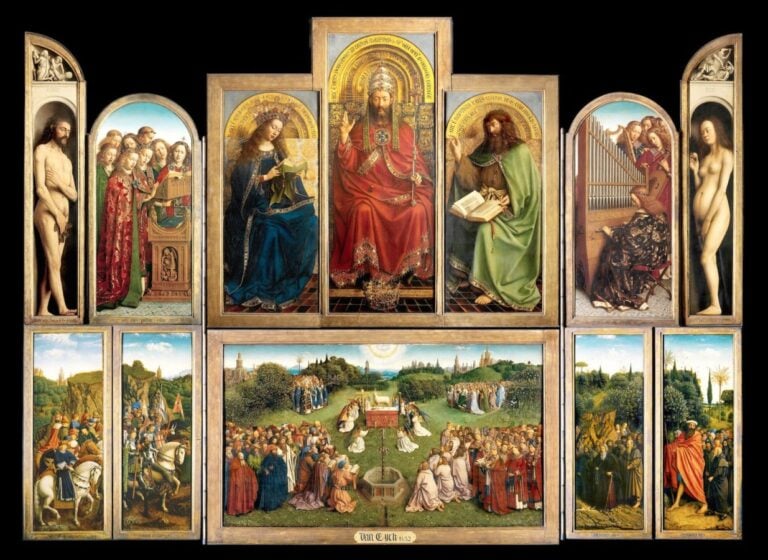 Jan van Eyck was a Flemish painter active in Bruges who was born in 1390 and died in 1441. He was one of the innovators of what became known as Early Netherlandish painting, and one of the most significant representatives of Early Northern Renaissance art. His technical brilliance and formal balance of style served as a model to generations of painters both North and South of the Alps.

Ready to learn more about him?

1. There is a rumor that he invented oil painting

Giorgio Vasari, (the main source of art history gossip from the 16th century) in his famous Lives of the Most Excellent Painters, Sculptors, and Architects claimed that van Eyck invented oil painting. Although it’s probably not true, such a rumor must have had many sources. Van Eyck definitely contributed to a revolution in art, switching from egg paint (tempera) to much richer and deeper colors available in oil paint.

2. He signed his paintings with a name and a motto

The later medieval artists remained anonymous, but in Northern Europe this changed in the early 15th century – exactly when van Eyck lived. He was one of the first artists to sign his paintings with his name, “JOHANNES DE EYCK”. On ten of these paintings it’s followed by his personal motto, Als ich kan (As well as I can) which is usually written in Greek characters. It’s believed that by this he was challenging other artists to do better than him.

3. There are just 20 of his works remaining

There are about 20 surviving paintings that are confidently attributed to van Eyck – from big ones like the Ghent Altarpiece to the illuminated miniatures of the Turin-Milan Hours. All are dated between 1432 and 1439.

4. He was a master of portraiture

Actually he painted everything, both secular and religious subjects, including altarpieces, single-panel religious figures, and commissioned portraits. His religious works are astonishing and his portraits are striking. The demand for portraits was high at the time because of the emerging merchant middle-class and a growing awareness of humanist ideas. Van Eyck’s portraits are characterized by his manipulation of oil paint and meticulous attention to detail, his keen powers of observation, and his tendency to apply layers of thin translucent glazes to create intensity of color and tone. He pioneered portraiture during the 1430s. Also, from as far away as Italy, he was admired for the naturalness of his depictions. Just look at his famous Arnolfini portrait!

5. We may know his self-portrait

Portrait of a Man (Self Portrait?), also known as a Portrait of a Man in a Turban or Portrait of a Man in a Red Turban, painted in oil in 1433. It has the Als Ich Kan autograph, but here it is unusually large and prominent, written on the frame. Consequently, this fact, along with the man’s unusually direct and confrontational gaze, have been taken as an indication that the work is a self-portrait. But, as often in art history, we are not completely sure about this.

6. He worked in Bruges as a court painter for Philip the Good of Burgundy

During the reign of Philip the Good, a small Duchy of Burgundy reached the apex of its prosperity and prestige and became a leading center of the arts. Jan Van Eyck was well paid by Philip. He sought for the painter to be financially secure and to have the freedom to paint whenever he wanted. The artist worked for the Duke as a court painter and also as a diplomat. He was respected and cherished in this role. For example we know, that on 18 October 1427, during the Feast of St. Luke, Van Eyck traveled to Tournai to attend a banquet in his honor, also attended by Robert Campin and Rogier van der Weyden, two other stars of Early Northern Renaissance art.

7. His works were known in the Italian Renaissance world

Jan Van Eyck’s art was not slow to arouse the admiration of the Italians, however. During his lifetime he even had some Italians among his patrons. Shortly after his death his paintings found an appreciative public in Italy. Two Genoese merchants trading in Bruges, as well as one Lucchese, are known to have commissioned pictures from him. It was very likely through them that some other paintings by the great Flemish master reached Italy.

8. His biggest masterpiece is in restoration now

Jan van Eyck produced paintings for private clients in addition to his work at the court. Foremost among these is the Ghent Altarpiece. He painted it for the merchant, financier, and politician Jodocus Vijdts and his wife Elisabeth Borluut. Jan’s brother, Hubert van Eyck, collaborated on this work too. Generally, art historians believe Hubert began it in 1420 and Jan completed it in 1432. Another brother, Lambert, is also mentioned in Burgundian court documents. He may have overseen his brother’s workshop after Jan’s death. Each of the altarpiece’s 12 panels feature intricately rendered biblical figures (some of the earliest subjects painted with oils) frozen in iconic scenes from Christianity.

A few years ago, Belgium’s Royal Institute for Cultural Heritage invested $2.44 million into meticulously chipping away the artwork’s top layer of oils. The first stage of the restoration finished in October 2016, when the outer panels were returned to St Bavo’s Cathedral. At the same time the second phase of the restoration began, that of the 5 lower panels of the opened altarpiece, including the central panel featuring The Adoration of the Mystic Lamb. This part of the restoration has recently finished and the third phase will continue in the future.

Here you can listen to a lecture by the head of the conservation of the altarpiece:

9. He wasn’t the best at painting sheep

During the restoration of the Ghent Altarpiece the restorers removed the over-paint on the part of the central panel that features the sacrificial lamb. The whole art history world gasped because the original Jan Van Eyck’s lamb is… Ugly. Weird. Disturbing. You name it!

As you can see, the original lamb (the one on the right) has a much more human-like face. Art historians of the Royal Institute’s restoration project claim that it was over-painted in the 16th-century to “neutralize” the expression. This was to make it less disturbing, and to adapt it the the taste of the time of the over-painting.

I don’t know, but maybe even a master like Van Eyck didn’t have to be the best at everything?

From February 1st to April 30th, 2020 at the Museum of Fine Arts (MSK) in Ghent there will be an exhibition, ‘Van Eyck. An Optical Revolution’, presenting over half of the twenty works of van Eyck preserved now. The centerpieces of the exhibition will, of course, be the outer panels of The Adoration of the Mystic Lamb. To contextualize the optical revolution he inspired, Van Eyck’s paintings will be shown alongside works by his most talented peers from Germany, France, Italy and Spain. ‘Van Eyck. An Optical Revolution’ will be one of the must-see exhibitions of 2020. We at DailyArt Magazine won’t miss it; be prepared for more articles about it soon!