Everything You Must Know About Las Meninas 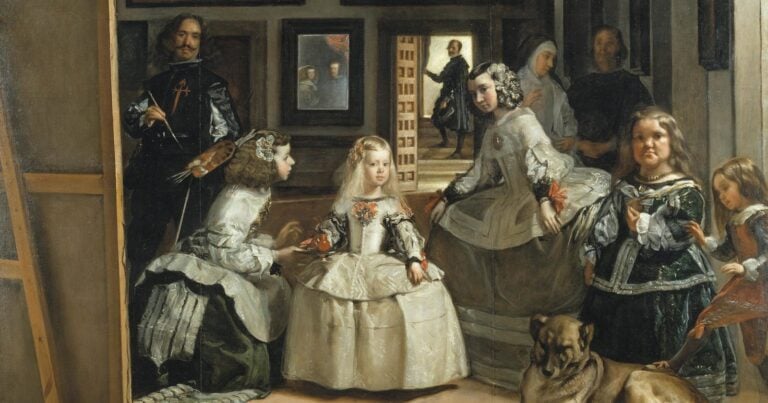 This is one of Velázquez’s largest paintings in which he worked very hard to create a complex and credible composition that would convey a “sense of life.” Las Meninas, which in Spanish stands for Ladies-in-waiting, is one of the most famous masterpieces in art history. And one of the most mysterious ones as well!

Its enigmatic composition confuses the spectator on many levels and raises the following questions: Are we participants in the scene? Are the figures looking at us or at their reflections in the mirror? What about the couple in the background mirror? Is that reality or a dream?

We could keep asking questions about this painting forever, but there are a couple of things that we know for sure. Here they come, everything you must know about Las Meninas:

1. Meet all the crew

Las Meninas was painted in 1656 in the Cuarto del Príncipe in the Alcázar in Madrid, which is the room depicted in the work. We can identify most of the members of the court service grouped around the 5-year-old Infanta Margaret Theresa, who is attended by two of the meninas: María Agustina Sarmiento (kneeling) and Isabel de Velasco (leaning forward).

We also see the artist himself working on a large canvas placed on the floor; the two dwarfs Mari Bárbola and Nicolasito Pertusato (they often appeared in European courts); a mastiff dog of an unknown name; and the lady-in-waiting Marcela de Ulloa who stands next to a guardadamas (attendant), while the chamberlain José Nieto stands in the doorway in the background.

There are faces of King Philip IV and Mariana of Austria, Infanta’s parents, reflected in the mirror.  They are watching the scene taking place.

2. It’s NOT a royal painting

Although in the middle of the composition, we see the Infanta and also the royal couple in the mirror, this painting is not a typical royal commission. Royal portraiture is traditionally formal, you can even call it stiff, used for the purposes of propaganda and representation. But here, the ladies-in-waiting, for which the painting is named after, surround the young princess, as does a bunch of fellow servants.

It is nothing else than a behind-the-scenes look at the Spanish court. Actually, it is more a genre painting but with some royal entourage.

3. You can see Velásquez himself here!

That was a courageous move for Velázquez to paint himself into Las Meninas. You needed to have a nerve to mingle your self-portrait with likenesses of the royals – and your patrons! The artist can be seen on the left with a brush in his hand.

4. The painting was altered… by the King himself?

While Philip IV had showered Velázquez with honors during his long service at court, he paid him his most lasting tribute after the painter’s death in 1660, one year after Velázquez had been inducted into the Catholic organization, the Order of Santiago.

To his honor, Philip IV commanded the order’s insignia be added to the painter’s chest in Las Meninas. Some historians even claim it was the king himself who painted on this final touch but it sounds more like a legend…

5. It has references to art history

There is an important art-historical reference that is expressed in the presence of the painter himself and the reflection in the mirror on the rear wall. Velázquez clearly was influenced by Jan van Eyck’s famous and equally mysterious Arnolfini Portrait. This illusionistic inclusion might be interpreted as a consideration on the act of seeing.

6. The title of the painting was changed a couple of times

Initially, the painting was entitled Retrato de la señora emperatriz con sus damas y una enana (Portrait of the Empress with her Ladies and a Dwarf) – we know that from a 1666 inventory. Later on, the work was referred to as La familia del Señor rey Phelipe Quarto, or just La Familia. The final name, Las Meninas, is documented in the 1843 catalog from Museo del Prado, where the painting resides now.

7. It was and still is super famous

Las Meninas was and is considered one of the most important paintings in Western art history. Even Velázquez’s contemporary, Italian Baroque painter Luca Giordano, praised this work as the “theology of painting.”  We must admit – we love it too.