Monet’s Bordighera Paintings – A Backgroud Story For A Love Affair 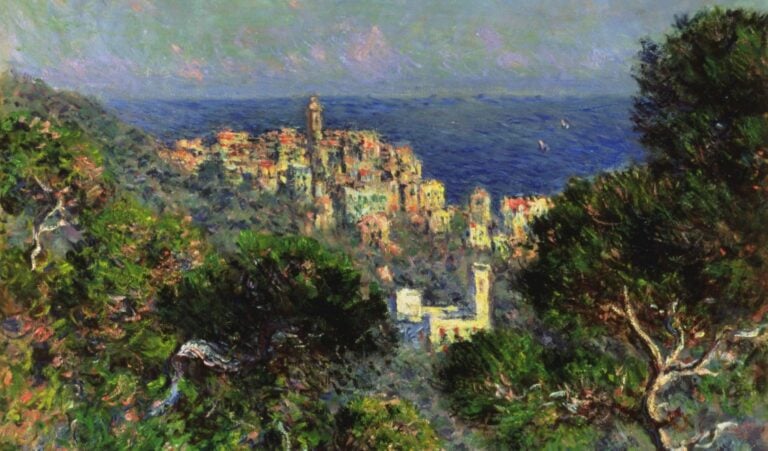 Italy had a major movie moment when it was chosen as the scenery for Call Me By Your Name. But Elio and Oliver were not the first ones to go through all the secret places in Bordighera. Monet went there decades ago and had a real challenge trying to capture everything he saw. Here you can get to know all about Monet’s Bordighera point of view.

If you’re like me you probably are in love with Call Me By Your Name, either the movie, the book, written by André Aciman, or both. All of those beautiful scenes around Italy in the eighties left us wanting more even if that means that we will cry our eyes out for half an hour.

If you’ve seen the movie or read the book you will know that there is a special part in which Claude Monet is mentioned (and if you didn’t do any of them now you know). Elio takes Oliver to his secret place and lets him know that Monet went there to paint. This could be a little lie just to make the movie and the book interesting but it’s actually totally true. This place is called Bordighera (although Luca Guadagnino, the movie director, made the decision of relocating the story to Lombardy) and it is located in the Mediterranean coast of Italy near the French border.

Before Monet started dedicating almost all of his work to painting his garden in Giverny, due to his blindness, he actually traveled quite a lot. He went to London, Rouen, Venice, the Netherlands, among many other cities.

His trip to Bordighera happened because he decided to take advantage of the European rail network that was spreading really fast. He first arrived in Bordighera in 1883 when he and Renoir went to visit Cézanne at l’Estaque. But it was in 1884 that he decided to go back and stay for three months. He arrived in mid-January and thought that the blue skies were a great contrast to the grey weather from the French winter days.

Monet was amazed by all the nature around Bordighera since it had a lot of trees, like palm trees, that he usually didn’t saw in Paris. Many other painters had gone to this city and painting the views, but Monet decided to differ from that and exclusively paint the vegetation around him and only occasionally include some of the landscape and houses but always in a minor way. This made him use colors that he had never used before which also led him to a state of almost madness because he was afraid of not being able to express how beautiful everything was and captured the essence of the place. He was so used to work with a certain color palette that he was afraid he would not be able to pick the right shades since they were all new to his painting. He wrote to his wife Alice Hoschedé a lot about this topic:

It is extremely difficult to do and it is very time-consuming, mostly because the large self-contained motifs are rare. It is too thick with dense foliage, and all you can find are motifs with lots of detail, jumbles terribly to paint and I, in contrast, am the man of isolated trees and large spaces.

This made him not being able to finish any of the works he started in Bordighera although he finished all of them once he got home.

In these three months, he also went to Dolceaqua which made him go home with more than forty paintings, most of them still in need of a finishing touch.

Going back to the beginning of this text, after I’ve finished reading Call Me By Your Name I decided I should look for some of the paintings Monet did in Bordighera. I wanted to see the place as he saw it. This research made me found out that one of the paintings (the one above) is located in the Hammer Museum in Los Angeles, which belongs to Armie Hammer’s great-grandfather. And Armie Hammer is the actor who played Oliver in the movie and he is also one of the boarding directors of said museum. I don’t know about you, but I think that this is the most amazing coincidence ever.