A Controversial Christmas Tree in Venice 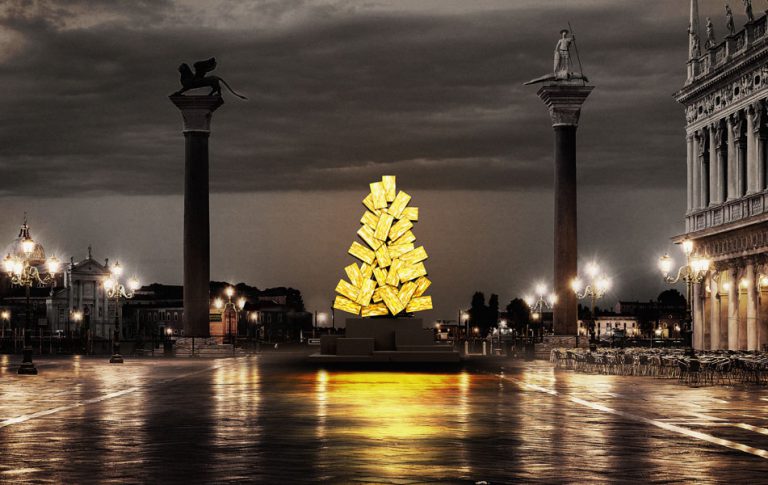 Weighing 9 tonnes, 10 metres tall, the 2020 Christmas Tree of Venice had become a scandal before it was lit up last week. Why? Because it’s not a typical green spruce or pine with colorful lights and baubles but a controversial digital installation.

80-years-old Fabrizio Plessi has his year in Venice in 2020. The Museum Ca’ Pesaro planned a grand retrospective dedicated to the artist. Since his studies at the Venetian Accademia di Belle Arti Plessi has been closely bound with the city. Starting with painting, he then discovered video in the 1960s, becoming one of the pioneers of videoart in Italy.

Almost from the beginning of his career, Plessi’s greatest inspiration has been nature and water, in particular. Since the 1980s, he has been exploring the relationship between man and environment. He has often made installations and sculptures from wood and stone juxtaposed with technology and industrial material. We can see his quest in the 2020 Christmas Tree. Another example is the site-specific work, created for the Museo Correr. This stands at the Piazza San Marco, facing the Basilica. In September 2020, the locals and few visitors could see ‘cascades of gold’ running in the windows of the museums like streams of liquid golden light. Accompanied by musical ‘echo’ composed by Michael Nyman, many regard the work as a symphony glorifying the Golden Age of Venice with its shimmering Byzantine mosaics and light reflexes playing in the water in the canals.

A message of tolerance

The controversial Christmas Tree entitled “Digital Christmas”, is part of the project “Golden Age”. It is intended as a videoinstallation. To all those who defined the tree as a ‘heap of scrap metal that destroys the Christmas spirit in the city’, Plessi responded:

“It’s fair to say what everybody thinks and I’m really not surprised that there are people who would prefer a traditional Christmas tree. Yet, I believe that in this dark year we need more than a typical Christmas tree. We need a ‘new light’ in Venice and a message of tolerance in the world. My tree combats the Christmas stereotypes and I have made it in the name of tolerance and coexistence, as it is realized from 80 rays of light that travel in 80 different directions, which hence highlights the intertwining of cultures which has been so characteristic of Venice.”

What do you think? Is the Venice Christmas Tree really controversial? And as many of us will spend Christmas in front of the screen, do we need another reminder of how ‘digital’ this Christmas will be?