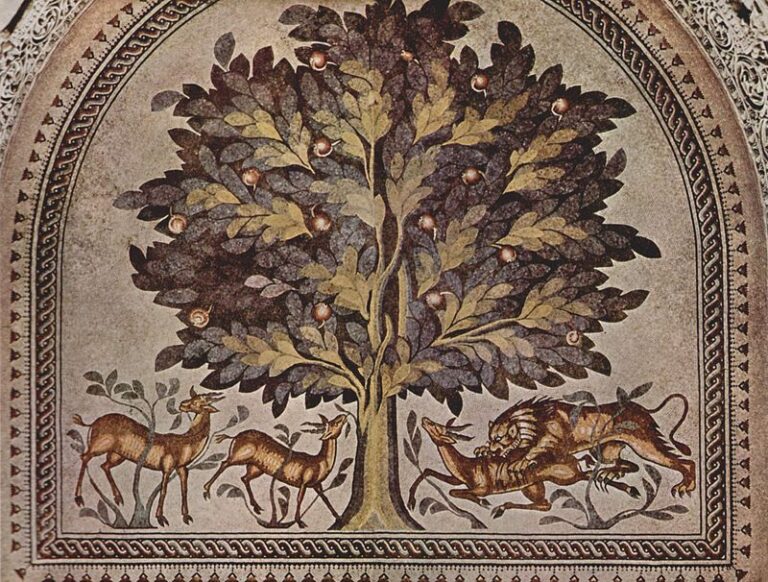 One of the most characteristic aspects of early Islamic architecture all over the world is the abundant use of mosaics, both in secular and religious buildings. Moreover, they are applied inside as well as on exterior walls. Some of the most famous examples will be featured in our first Islamic mosaics panorama.

Are Islamic mosaics Islamic at all?

It’s important to keep in mind that no artistic phenomena are born in a vacuum, because cultures interact, leaving visible traces of one another in the material heritage. One example of this cultural diffusion is the use of mosaics by the early Muslims. Started in Mesopotamia in the 3rd millennium BCE, mosaics were widespread in Ancient Greek and later Ancient Roman art (or interior design, if you wish). As the Arab tribes were often merchants, they knew the people they were trading with well and also the trends that were in vogue. In terms of building decoration, one of the most popular materials of the time was Byzantine mosaic, which was made up of tiny pieces of glass, ceramic, marble, or precious stones and metals, which shimmered in the light.

Dome of the Rock

After the foundation of the first caliphate by the Prophet Muhammad, the race for power in the ever-expanding Islamic sphere of influence began. One of the strongest dynasties which gained power was the Umayyads, who created the second caliphate after Muhammad. The fifth caliph in the dynasty, Abd al-Malik ibn Marwan, was the person who constructed the shrine in the middle of Jerusalem, over the rock believed to be the one used by Abraham for the attempted sacrifice of his son Isaac. Muslim domination over the site is still very controversial because it’s also a sacred place for Jews, because the Dome of the Rock was constructed precisely on the spot of the Second Jewish Temple (destroyed by the Romans).

The Dome of the Rock is a fantastic example of cultural interaction. The golden mosaics shimmering in the light show the great influence of the Byzantine style of decoration (most probably the mosaics had been created by Byzantine artisans), while the winged crowns repeating in the iconography, are nothing less than the crowns worn by Sasanian kings (the Sasanian Empire was defeated by Arab armies).

The mosaics on the inside of the Dome do not show a single human or animal figure, instead they offer the viewer a feast of geometric and floral shapes creating intricate designs. Although Islam does not prohibit the use of figurative art, as we see illustrious examples of it in the traditional epics or the interior decoration of housing, we won’t find it in religious architecture. This iconophobic tradition is based on the Quran writings:

5.90. O you who believe! Intoxicants, games of chance, sacrifices to (anything serving the function of) idols (and at places consecrated for offerings to any other than God), and (the pagan practice of) divination by arrows (and similar practices) are a loathsome evil of Satan’s doing; so turn wholly away from it, so that you may prosper (in both worlds).
6.74. And (call to mind) when Abraham spoke to his father, Āzar: “Do you take idols for deities? Indeed, I see you and your people lost in obvious error.

A notion that reinforces this iconophobic tradition is the idea that only Allah is the creator of living beings and any man trying to recreate His work is trying to rival Him. Instead, people had better glorify God’s work and represent how perfect He is. Hence, Muslims have mastered art that expresses perfection and infinity through geometrical patterns, vegetal motifs (referring often to the greens of Paradise), and words. Writing is especially important in Islamic architecture, hence the entire religion is based on the Holy Book – the Quran, which literally means ‘the recitation.’

If you look closely at the image above you will see the inscriptions are in gold. They are written in an old typographic style called Kufi, which is characterized by its angularity, which also makes it easy to read. The letters rise or descend from a horizontal base, are carefully proportioned and last but not least are meant to be aesthetically pleasing. The inscriptions in the Dome of the Rock are also the earliest evidence for the written text of the Quran!

The Great Mosque of Damascus

Our Islamic mosaics panorama now takes us to Damascus, which was conquered by the Muslims in 634 CE. Considered the fourth-holiest place for the whole religion, the mosque had actually been incorporated into the precedent Christian Basilica dedicated to John the Baptist (until this day it hosts a shrine allegedly containing the severed head of John the Baptist, who is honored as a prophet by both Muslims and Christians). Also in this case the mosaics, which you can find both inside and outside, were most probably created by Byzantine master artisans (a theory by John W. Creswell, an American scholar, says that the Caliph Al-Walid even sent a formal request for these artists to the Byzantine Emperor).

Most of the mosaics in the mosque represent urban and natural landscapes (no humans here either!). Above, we can see the lavish Umayyad palaces built alongside the Barada River banks whose waters support the fruit-bearing trees. The interpretation of such scenes can be double-sided: either they are meant to glorify the magnificent beauties of the city of Damascus under the Umayyad rule, or they symbolically refer to the Paradise promised to the faithful.

I’ll close our Islamic mosaics panorama with a figurative mosaic, located in the bath complex, and one of the symbols of the Hisham’s Palace, Palestine, five kilometers north of Jericho, at Khirbat al-Mafjar on the West Bank. The complex is spread over 60 hectares and is made up of the baths, together with the main palace and agricultural estate. The baths consisted of several rooms, one of them being a special reception area (diwan) where the guests (often lovers) were admitted. It is in this room that the Tree of Life, is found, which depicts a lion hunting gazelles at the foot of a tree. Because of its setting, various interpretations have been given to this impressive image.

Some say that the lion is hunting for lovers and represents al-Walid b. al-Yazid, a nephew of the Caliph Hishām ibn ʿAbd al-Malik. Walid, who was famous for his extravagant lifestyle and was, according to scholar of Islamic arts, Robert Hamilton,the owner of this spectacular residence. The other interpretation is the religious one: the lion is Islam which conquers other religions and reigns over the Tree of Life. Either way, the dazzling colors and repeating geometric patterns in the mosaics prefigure later Islamic designs, while the figural art is unique to the Umayyad period.