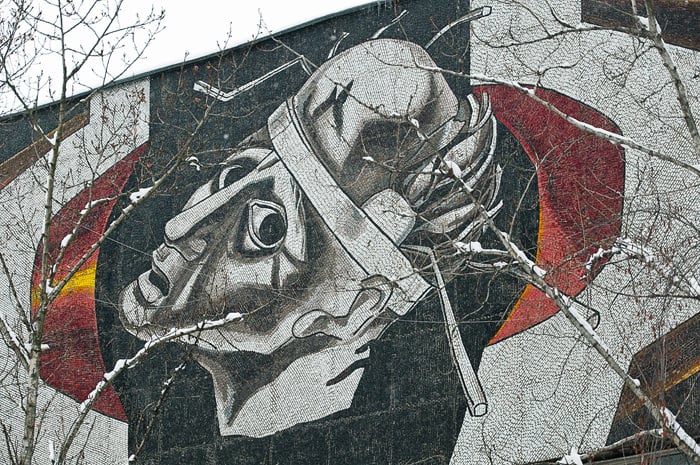 In the conditions of the rigid USSR system of control, impersonality of buildings was practically inevitable. However, there was one way of escape: Soviet mosaics. Here are the 10 great Soviet mosaics in Russia.

In 1925, two mosaic coats of arms of the USSR appeared on the facade of the Kievsky railway station in Moscow. For that we owe special thanks to Vladimir Frolov. Frolov was the Head of the mosaic workshop of the Academy of Arts in Leningrad. As a result of his work it is from 1925 that the history of Soviet mosaics is said to begin.

Before 1925, citizens had only associated mosaics with churches and temples. Knowledge of mosaic as an art form was not widespread. This was because it required large resources and the Soviets were still getting back on their feet.

There are several main themes. These include sports, science, space, history, ideological appeals, labor and industrialization, local folklore. The images of science workers are notable for their semi-fantastic, theatrical nature. They are shown as supermen conquering a peaceful atom – literally – with their bare hands. You could create a movie plot out of these images!

Let us see some of the greatest examples of the Soviet mosaics below!

1. Battle on the Ice, Saint Petersburg

The smalt mosaic panel in the metro lobby was originally the diploma work of the monumental artist Alexander Bystrov. It is a scene from the history of the Northern Crusades. The artist presented the concept for his Battle of Alexander Nevsky with the Teutonic Knights on the Ice of Lake Peipus in 1242 in 1985. However, it took a further five years before the completed work was installed. The panel measures 60 square meters. It is located in a stark metro pavilion where it provides the main example of color. It is like a jewel stored in a not too expensive frame!

2. Man and the Stars, Saint Petersburg

This image of an astronaut appeared six years after Yuri Gagarin’s legendary flight into space. Gagarin hovers over outer space, which is represented here in the form of zodiac signs. The artist used glass and ceramic tiles which she collected from the waste of various industries. The total mosaic covers 100 square meters and it is one of the most cosmic spaces in Saint Petersburg.

These Soviet mosaics are on the face of the building itself. The Bryantsev Youth Theatre opened in 1922. It was one of the first professional repertory theaters for children in the world. In the spaces between the pylons, there are two mosaic panels. These show the young spectators themselves: girls on the left, boys on the right.

4. Life of a Cell, Saint Petersburg

This panel is executed using mixed techniques: mosaic and ceramics. The life of a cell is shown in a special, fantastic image. We see various living organisms scattering out from a giant, pearl-like cell. As a result, the notion of the ‘mad scientist’ will be associated with the building for life!

Pulkovo border is the place where the Red Army stopped the German troop offensive in September 1941. The memorial complex includes a concrete 20-meter stele with a mosaic panel made from white-gray-black granite. It shows episodes from the life of the besieged city. One of these reveals the heroism of Leningrad women.

This mosaic is full of symbolic meanings. The artists set themselves the goal of expressing the mathematical purpose of the building in the design. Initially they took a concrete square of 12.8 meters, one-millionth of the earth’s diameter. Next, they created a Möbius strip, the symbol of infinity, which they covered with formulae. Finally, they embedded the strip into the concrete square.

However, local people simply call it ‘the ear’, relating its shape to that part of the human anatomy.

Everyone knows that this is a monument of the ear. Seeing it, the ears of the townspeople move in greeting.

7. Healing of a Man, Moscow

The entire building is one big mosaic. Although the overall theme is medical practice, the style of illustration gives an impression of science fiction. Four large images are located at each corner of the building: Salvation, Healing, Birth, Hope. The first of these, Salvation, shows the work of recovery specialists at the operating table.

A workshop of Tatar shoes using a national pattern was the first occupant of the building. This pattern is repeated in the mosaic. Local people have christened the building Tubeteika because the mosaics make the building look like a traditional Tatar’s skullcap. After a fire in 2015 there was a two-year renovation program. One result was that the mosaic was replaced with a photo banner showing the same decoration.

9. The Joy of Working, Tolyatti

The first title of this mosaic was 55th Anniversary of the USSR. The grandiose 530 metres² panel shows the main milestones of Soviet history. These range from the October Revolution to Gagarin’s flight into space and the construction of the AvtoVAZ factory. Korolev’s work also illustrates the main purpose of Soviet mosaics which is to commemorate great historical events. Regrettably, the mosaic is currently in a very bad state despite several attempts at restoration which have taken place since 2015.

10. Art Belongs to the People, Ivanovo

This mosaic is a graduation piece by the students of the Surikov Art Institute in Moscow. It is interesting because of the stunning detail, the young age of its creators, and because of its scale. Smalt covers the entire building firewall.

When you think about Modernist architecture, probably Le Corbusier, Mies van der Rohe, or Oscar Niemeyer comes to mind. But have you paid attention...