Stepping into the South of France with Picasso at BASTIAN 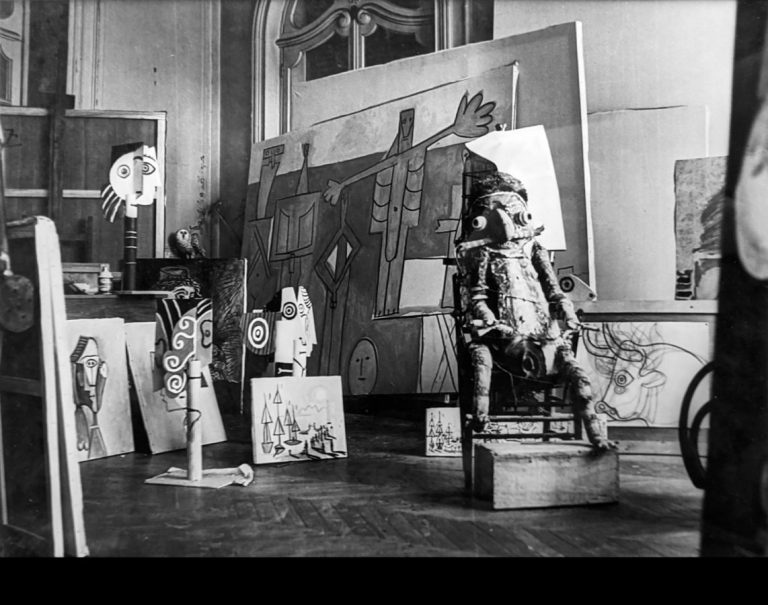 BASTIAN’s exhibition Atelier Picasso in London (3rd September – 31st October 2020) evokes the mood and heat of Picasso’s later years in the South of France. The exhibition sheds a fascinating light on the creative universe of the 20th century art superstar. DailyArt Magazine interviewed the director of the gallery, Aeneas Bastian.

“I think Picasso once said, ‘I wish to live like a poor man but in a rich man’s setting’. I think he was deeply skeptical about anything too ordinary or mediocre. He was looking for simple or primitive things in the street but he was also interested in very valuable or precious or extraordinary objects. But he would tend to disregard anything in between. He was clearly looking for these extremes.”

Atelier Picasso at the BASTIAN Gallery

The intimate size of BASTIAN’s Mayfair gallery and the physical proximity to the artworks make this exhibition particularly special. Unlike a larger museum or gallery the pieces are on show without barrier, heightening the sense of naturalism and the sense of closeness to Picasso himself. Similarly the gallery chooses not to write guiding signs, leaving us to draw our own conclusions about the pieces and their curation.

“In the end maybe we can contribute very modestly to understanding Picasso and his work. To me he remains mysterious in a way because he’s such a complicated personality that you never really feel that you completely understand him as a man or as an artist. You can only try to understand the development of his work.”

Originally the exhibition was meant for the summer but was then put on hold due to the Pandemic. In a way this is fitting because the exhibition captures Picasso’s escape from war-torn Paris. The languorous and sunny lifestyle that the pieces evoke mirrors our own emergence from lockdown.

“He was looking for simplicity and something almost primitive in a rather grand or eloquent setting. Picasso chooses a villa or mansion in the hills above Cannes and creates a chaotic studio. He doesn’t really furnish or design the interior but almost places or drops a few pieces of furniture and leans his paintings against the wall and objects on the floor or table.”

The photography by André Villiers along with Picasso’s poster designs capture the pace and feel of life at that time. After Villiers took a picture of Picasso at a street market in 1953 the pair became friends and collaborators. Villiers’ photographs document Picasso’s life for almost twenty years, capturing candid and evocative moments. Villiers first took hold of a camera as part of part of his recovery from an illness in the 1940s.

“You see that creative disorder where it is all shambolic but is part of Picasso’s creative universe. He would surround himself with all these objects including his own finished and unfinished pieces.”

Extremely vibrant posters from the Mourlot workshop (popular printmakers of the period) reflect the mood of the period and the rapid process of art making and exhibiting.

As well as posters for his own exhibitions, there are also posters for things like a village fete in Vallauris featuring bull-fighting.

A main feature of BASTIAN’s exhibition is the eclectic variety of ceramics on show. In particular, the colorful zoomorphic ceramics evoke both the energy and the carefree lifestyle on France’s southern coast.

“The ceramics are associated with a kind of joy of life he found in the south of France having left Paris and embarking on a new chapter in his career.”

Signficantly, BASTIAN has one of the the world’s largest collections of Picasso’s visage (face) plates. Each plate would have been part of a set of 120 from the Madoura workshop in Vallauris. Seeing the plates together allows you to observe his experimentation, from texture and color, to design and finish.

“When they were initially sold by the Madoura factory they were fairly inexpensive because they didn’t have the same status of prints…ceramics were not taken seriously and were sold at fairly moderate prices and some of the initial buyers just used them. It is all part of their story.”

The downstairs section of BASTIAN’s gallery aims to create a more natural evocation of Picasso’s workshop. It includes objects and artworks displayed as if in the artists home. For example, pieces on period tables (borrowed from Lofords), a painting on an easel, and the artist’s correspondence.

Bastian has loaned two pieces of African art similar to those collected by Picasso himself.

“Picasso studied quite a lot of greco-roman vases and obviously surrounded himself by african tribal art. He was aware of all the new currents and developments but was quite distinct from art of his time and would rather look back.”

Recurrent themes in the zoomorphic pottery are owls, partly because Picasso had a pet owl at the time, but also due to the link to the Greek goddess Athena (whose Roman name is Minerva), goddess of wisdom. Also linked to the Classical is Picasso’s obsession with the Minotaur, the mythological half man and half bull creature. Picasso used the image of the Minotaur to explore personal emotional turmoil and tensions between lust and violence.

Similarly, a copy of the Lysistrata, a Greek tragedy, hints at Picasso’s reverence for Classics, along with a self-portrait of the artist sculpting himself as Apollo.

Picasso’s appalling treatment of women in life and art is something that BASTIAN do not shy away from.

“We probably can’t separate these two poles, they are part of Picasso’s life… if they were not included we would be hiding one side of Picasso and his story.”

A centerpiece of the exhibition is an exquisite ceramic plate with a beautiful portrait of Picasso’s wife Jacqueline.

This profile is the poster image chosen both by BASTIAN and by Picasso himself. Romantic photographs of the couple are also among the pieces on show.

However, BASTIAN does not shy away from Picasso’s troubling treatment of women. ‘We want to make it transparent and clearly visible’, says Aeneas Bastian. Right beside Jacqueline’s stunning portrait is a morose portrait of Picasso’s earlier mistress (and artist in her own right) Dora Maar.

It is a rare proof for the final lithograph, part of the creative process rather than a finished artwork. It’s a lovely inclusion because it brings in Picasso’s cubist work for which he is so well known. Nonetheless, the juxtaposition of the beautiful portrayal of Jacqueline next to the almost hysterical portrayal of Dora is unsettling.

Furthermore two fascinating pencil drawings from the Vollard suite sit next to the portraits. In these drawings a naked Minotaur, Picasso’s alter-ego, is climbing on top of sleeping women. Overall they are a striking portrayal of sexual violence that is even more disturbing because of the autobiographical nature.

“It is only part of a puzzle. It still feels quite mysterious to me, although so much has been published about Picasso and so many exhibitions have taken place. There is so much to be explore and discuss.”