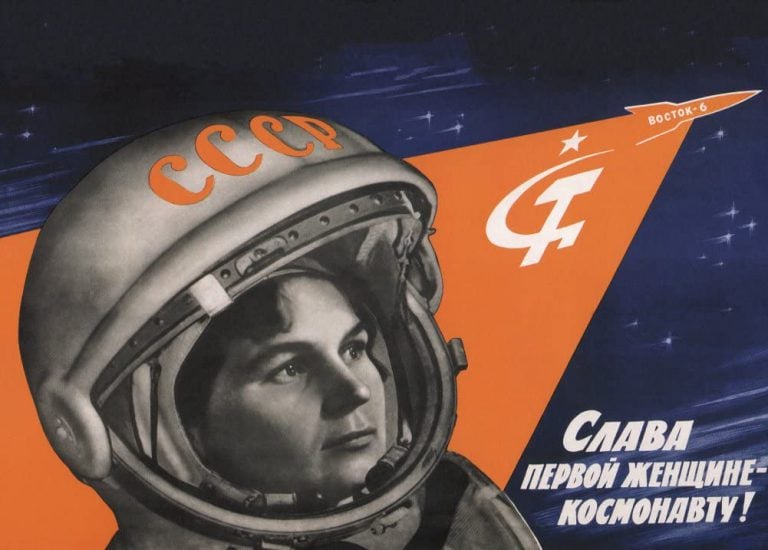 Fashion as Manifesto: Uniforms Designed for an Imaginary Space Station

Sports Fan? You Will Love These Vintage Olympic Posters

Here is a small selection of our favorite Soviet space posters together with some tidbits about the beginnings of the Russian space program.

Astronomical motifs first appeared in Russian popular culture at the beginning of the 1950s, slowly gaining more meaning and reaching peak enthusiasm in 1957, with the successful launch of Sputnik-1 into space. That year also marks the beginning of the Space Race – an American-Soviet competition in achieving spaceflight capability. Essentially, until Neil Armstrong’s famous first steps on the moon, the USSR was leading the race with many spectacular missions. For example, they launched the first man-made satellites (1957), sent the first unmanned trips to the Moon (1959), and finally, the sent the first human into Earth orbit (1961).

Just like any official art in the USSR, soviet space posters had a clear purpose: Propaganda. Therefore the genre mainly consists of designed illustrations, rarely displaying individual style or even attributing the author. Illustrations were meant to carry a message, a message of the glory of science and the importance of progress. The posters were accompanied by slogans such as; ‘Space will be ours! Long live the Soviet People’, ‘The Space Pioneers’, or ‘The Road to Space is Soviet’, thus amplifying the message.

The Road Is Open for Humans

This poster designed by Konstantin Ivanov presents a true working-class hero, honoring the poor pups that were involuntarily sent on a trip into space. The brave dogs in the Sputnik-5 spacecraft are Belka (Russian for Squirrel) and Strelka (Little Arrow), who both spent a day in space on the 19th of August 1960. They were also accompanied by a happy crowd of 42 mice, a grey rabbit, two rats, some flies, several plants, and various mushrooms. All of the passengers survived and hence became the first Earth-born creatures to go to space and return.

Statistically, most of the dogs sent into space survived their mission. One notable exception is poor Laika (the Barker), the first living Earth-born creature to be sent into orbit. Laika died around the seventh hour of the Sputnik-2 mission from overheating.

The Fairytale Became Truth poster celebrates the 12th of April 1961, the day when Yuri Gagarin became the first man in space. The Soviet hero is portrayed with a star in his hand – like a modern Prometheus, he is bringing light to the nation.

Valentina Tereshkova was the first woman in space, where she spent almost three days with a Vostok-6 1963 mission. Furthermore, she remains the only woman to have gone on a solo space mission to this day.

The Road to Space Is Soviet

Can’t get more propaganda than this one! This soviet space poster has everything you could dream of – a metallic Vostok-2 soaring through the atmosphere as well as the USSR hammer and sickle flag in the background.

One of the most common themes in soviet space posters is a Utopian vision of a better, upgraded life. New territories, new planets, new societies – and all thanks to scientific progress. These visions stem from a philosophical and cultural movement called Russian Cosmism. The movement was developed by Nikolai Federov in the late 19th into the early 20th century, and focused on researching the relations between humanity and outer space. Cosmists believed that modern humans have an ethical obligation not only to prevent, but to try to cease death and resurrect the greatest minds using all possible scientific tools. The movement saw outer space as the territory of immortal life and infinite resources, which ultimately should be populated by immortal humans in order to create a universal utopia.

Aside from politically commissioned posters, space themes were also part of popular culture. One of the most important publications was Tekhnika Molodezhi (Technology of the Youth), in print since 1933. The magazine played a key role in developing the science fiction literary genre in Russia and became extremely popular thanks to its marvelous, futuristic cover illustrations.

One of the propaganda ideas hidden in these posters is the equality of all union workers. Although the astronaut is leading, his achievements progressed through the work of many other professions – therefore all Soviet people become Space Heroes.

I'm still mastering the art of writing bios, so in the meantime let me throw you five random facts about me: I work in the DailyArt Magazine as the Assistant Editor and the Social Media Manager I wrote my MA thesis about astronomical accuracy in Space Art I have three adorable guinea pigs I am a fan of weekend getaways I have two spleens (why? nobody knows.)