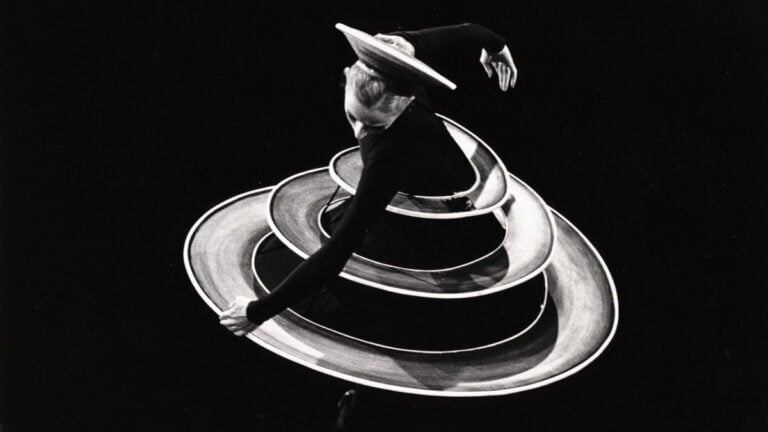 Frauhaus: Gunta Stölzl and the Women of the Bauhaus

Bauhaus Turns 100! Yahoo! This is your celebration!

Bauhaus is widely known for its iconic designs and contributions to the art world. What is less known is that their concepts could be applied to dance. Not as popular as their crafts, the dances encompassed the values and constructs of the workshop: modernity, geometry, experimentation, and functionality. Bauhaus’ most famous and most studied dance is The Triadic Ballet (Das triadisches Ballett).

Steeped in artistic and revolutionary concepts, it also mesmerizes with its psychedelic, whimsical oddities that would not be out of place in a modern avant-garde production. Oskar Schlemmer, a Bauhaus painter, sculptor, and teacher created the Triadic Ballet in 1922. The score was composed by Paul Hindemith, and only eight minutes of the original score survive. Schlemmer described his work as “artistic metaphysical mathematics.”

The entire work is based on threes: three dancers, three plot-free acts with 12 choreographies, and 18 costumes. The three acts play with the color theory so central to the Bauhaus work. The first act is yellow, the second is pink, and the final is black. The yellow set is very cheerful and burlesque-like, the pinkish theme is more ceremonial and festive, and the final is much more mystical and esoteric. Schlemmer plays with the Nietzschean Apollonian and Dionysian ideas of the strict, controlled, and reserved, versus the more emotional and expressive.

As with all of the work of the Bauhaus, there was a desire to free and dismantle the old forms of the art form, stripped to the basic and bare components. Schlemmer used ballet and pantomime, opposing the excesses of the opera and theater, even shunning the tiara and tutu. Funnily enough, his Triadic Ballet costumes are so elaborate and unconventional, they distract from the movements and take on a life of their own.

The mechanical and geometric costumes explore the human form and movements in unique and trippy ways. They also play with these modern themes that were encompassing Europe in the early 20th century: industrialization and machinery and the relationship between humans and machines.

Due to the Bauhaus’ controversial and groundbreaking work, they became targets of Nazi oppression and the school was closed in 1933. Schlemmer was forced to leave teaching as his work was deemed degenerate art, and a lot of it was destroyed during the war. He later died of a heart attack at the age of 54 in 1943.

The beauty of the legacy of Bauhaus is that the work is always being revamped, reinterpreted, and renewed. The Triadic Ballet was no different. Reconstructed versions began appearing in the 1960s, and have continued ever since. Choreographers and dance historians piece together interpretations using Schlemmer’s notes and drawings. This video of the 1970 reconstruction by Margarete Hastings, Franz Schömbs and Georg Verden shows the results of that work and was one of the earliest and most well-known reconstructions. With the centennial of Bauhaus, the Bayerisches Staatsballett has been performing the revival of the ballet.

So unique were the costumes and designs, that they provided the inspiration for films such as Fritz Lang’s Metropolis (1927) and David Bowie‘s Ziggy Stardust looks.

The appeal and impact of Schlemmer’s ballet is yet again another demonstration of how powerful, far-reaching, and noteworthy the Bauhaus legacy is. It penetrates countless aspects of our visual world and culture. So modern and intriguing in its own time, it continues to provide fuel and stoke creativity a hundred years on.

Kyra Nijinsky was a Russian ballet dancer and the daughter of the famous Vaslav Nijinsky. She was painted by Oswald Birley in 1935 and we are pleased...