Claude Monet, The Artist Who Painted In Series 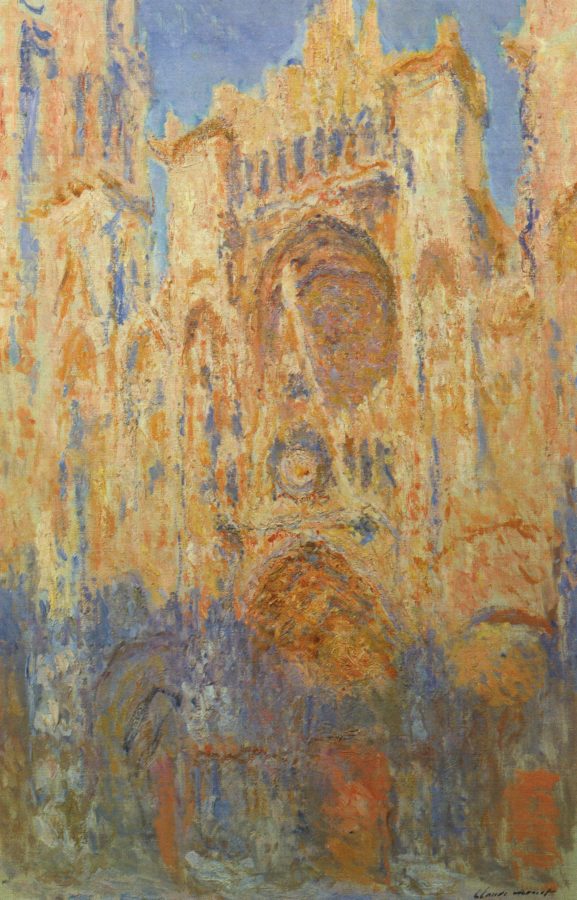 Claude Monet was famous of his series of paintings. He repeatedly painted the same subjects in different lights, at different hours of the day, and subjected to the changes of weather and seasons. This practice began in the 1880s and continued until the end of his life in 1926. Here you will find the overview of his greatest painting series: 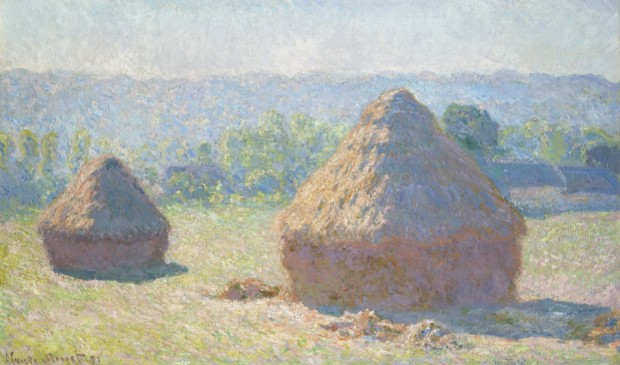 Haystacks was his first series exhibited. Fifteen of the paintings were exhibited at the Galerie Durand-Ruel (owned by the famous impressionist marchant) in 1891. These paintings were an important breakthrough both in Monet’s career and in the history of French art. The novelty was the result of their subject matter and the concept of the series intended to be seen together. 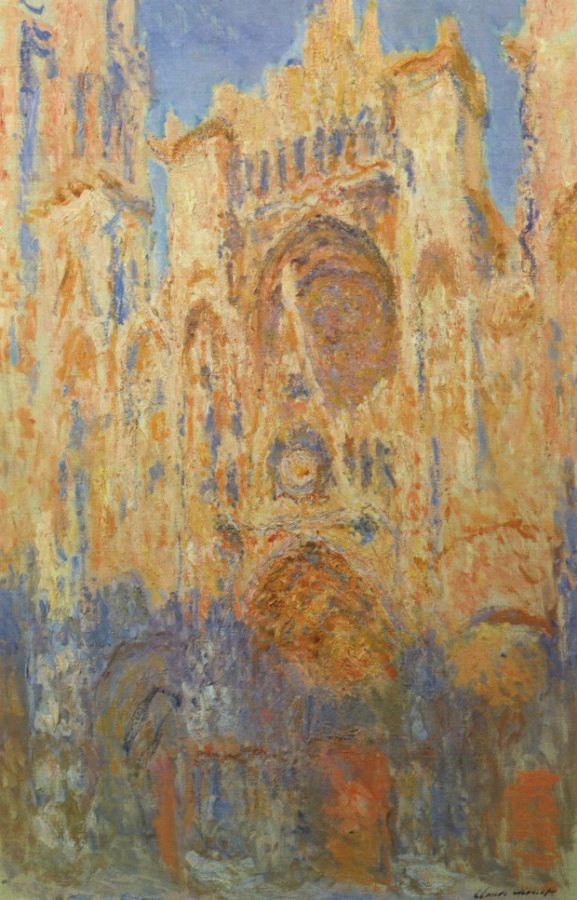 Twenty-six views of Rouen Cathedral is probably the best-known series of Monet. It was made in 1892 and 1893, then reworked in Monet’s studio in 1894. Monet rented spaces across the street from the cathedral, where he set up temporary studios for the purpose. 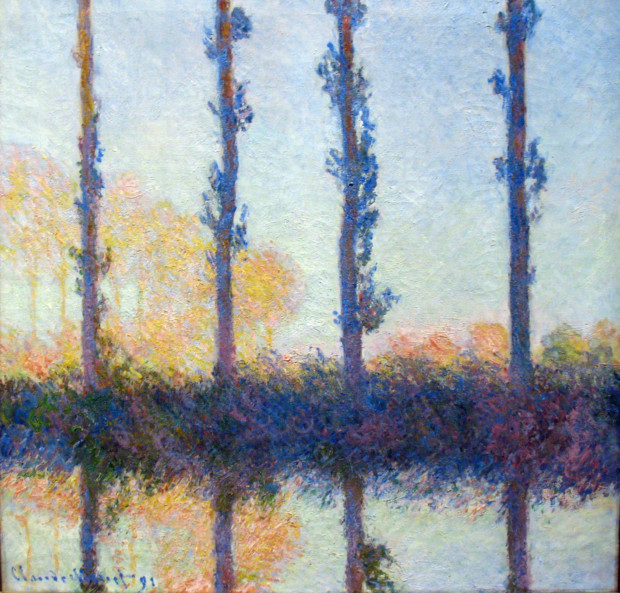 The Four Trees, (Four Poplars on the Banks of the Epte River near Giverny), 1891, Metropolitan Museum of Art

This series was created in the summer and fall of 1891. The trees were in a marsh along the banks of the Epte River, a few kilometers upstream from Monet’s home and studio. To reach his floating painting studio that was moored in place, he went by a small boat up the nearby waterway to where it joined the mainstream. There is an interesting story regarding these poplars – the trees actually belonged to the commune of Limetz that put them up for auction before Monet had completed all of his paintings. At a certain point Monet was forced into buying the trees because he still wasn’t finished with his paintings. After he finished the series he sold the trees back to the lumber merchant who wanted them. 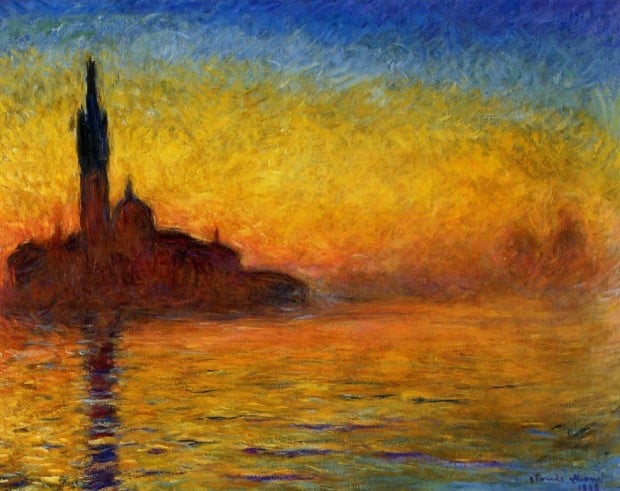 “Although I am enthusiastic about Venice, and though I’ve started a few canvases, I’m afraid I will only bring back beginnings that will be nothing else but souvenirs for me”, Monet wrote to the art seller Gaston Bernheim. Luckily he finally painted 37 canvases featuring a dozen different views, taken within short distance from one another, which are among his most popular works now. 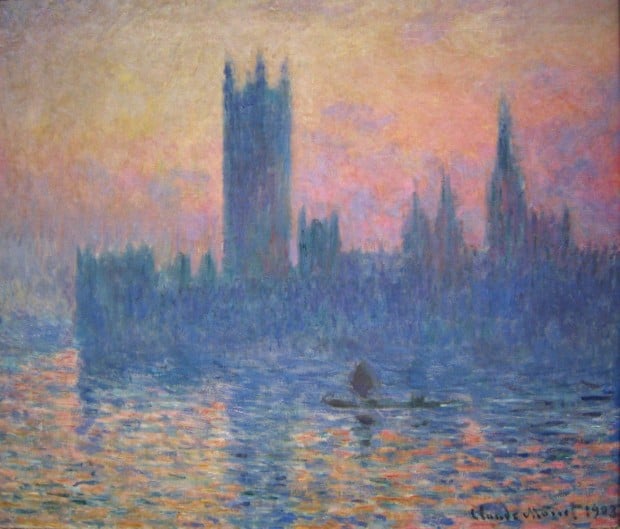 Monet painted this series of nearly a hundred views in the fall of 1899 and the early months of 1900 and 1901 during stays in London. All of the series’ paintings share the same viewpoint from Monet’s window or a terrace at St Thomas’ Hospital overlooking the Thames. They are however painted during different times of the day and weather circumstances. Look at this mist! 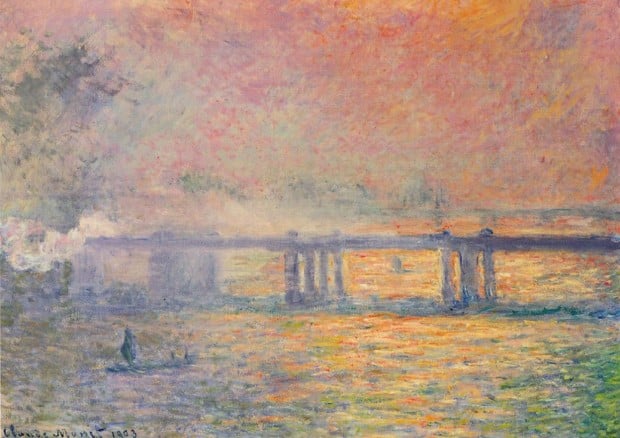 Regarding the mist, it is also present in Charing Cross Bridge series painted between 1899 and 1904. Out of thirty-seven canvases only twelve were finished in London; the rest the artist took back to his Giverny studio for completion.

This is the largest of Monet’s series.  250 oil paintings depicting Monet’s flower garden at Giverny were the main focus of Monet’s artistic production during the last thirty years of his life. In 1908, Monet destroyed 15 of his Water Lilies right before they were to be exhibited at the Durand-Ruel gallery. Apparently, the artist was so unhappy with the paintings that he decided to ruin them rather than have the work go on public display. What’s also interesting, many of the works from the series were painted while Monet suffered from cataracts.

If you find any joy and inspiration in our stories, PLEASE SUPPORT
DailyArt Magazine with modest donation. We love art history and we want to keep going with writing about it.
$5 $10 $25 $50 $100 MONTHLY
Related Topics:series