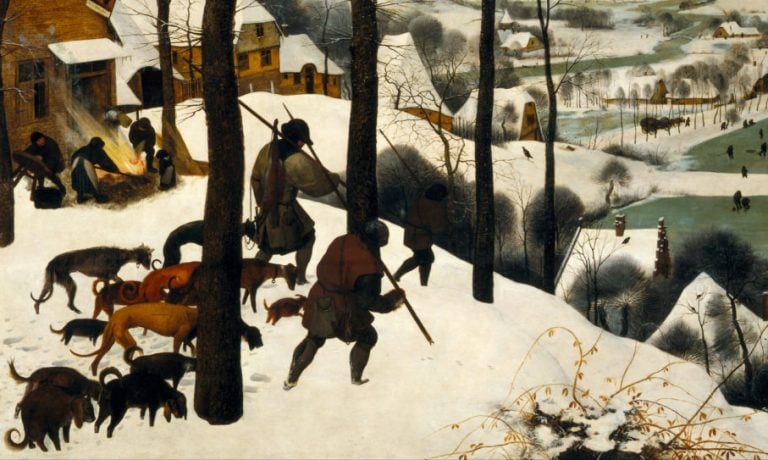 The Hunters in the Snow by Pieter Bruegel the Elder belongs to the magnificent collection of Kunsthistorisches Museum in Vienna. Discover its story and see which filmmakers were so inspired by it that they decided to include it in their movies!

The Hunters in the Snow by Pieter Bruegel the Elder is an artwork representing the medieval and early Renaissance tradition of the Labors of the Months. It is a cycle in art that represents various rural activities that took place in specific months of the year. This painting is one of a series of six commissioned in the late 16th century by the Antwerp banker Niclaes Jongelinck, five of which still survive. Only Summer is considered to be lost.

The painting shows a wintery scene. Three hunters are returning from an expedition accompanied by their dogs. It seems their expedition wasn’t successful. Only one man carries something and it is only a fox. In the snow in front of the hunters are the footprints of a rabbit or a hare which perhaps escaped or was missed by them.

The landscape itself represents a valley with a river meandering through it and jagged mountain peaks visible on the far side. It is not typical for the Netherlands. Also visible is a watermill with its wheel frozen stiff. In the distance, figures ice skate, play hockey, and curl on a frozen lake.

The 1560s was a time of religious revolution in the Netherlands. Possibly Bruegel and his patron were attempting to portray a perfect image of what country life used to look like, or what they wished it would be.

Hunters in the Snow in Cinema

The Hunters in the Snow is used extensively in Russian director Andrei Tarkovsky’s films Solaris (1972) and The Mirror (1974). Solaris is a legendary sci-fi movie from the USSR about a psychologist who is sent to a station orbiting a distant planet in order to discover what has caused the crew to go insane. This scene from Solaris is filled with memories that portray the main character’s longing for home and one of them is represented by The Hunters in the Snow. The painting depicts various important memories for the character since it depicts an image from Earth.

The Hunters in the Snow appears in Lars von Trier’s 2011 film Melancholia as well as Alain Tanner’s film Dans la Ville Blanche (1983). It was also an inspiration for Roy Andersson’s 2014 film A Pigeon Sat on a Branch Reflecting on Existence.