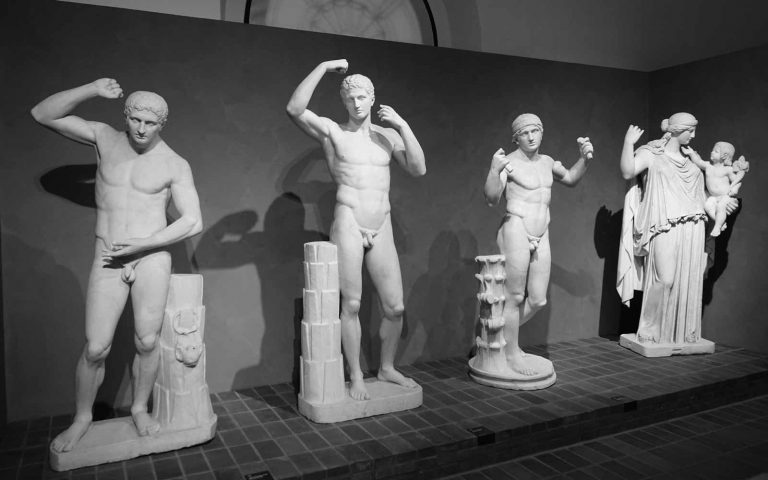 Persephone and the Pomegranate: Art in Ancient Greece

After strictly remaining in the shade for decades and decades, one of the world’s most extensive private collections of classical sculpture, the Torlonia marbles, became partially public on the 14th of October 2021. Out of 600+ artifacts that belong to the foundation, only 90+ were available for viewers to observe in Rome’s Musei Capitolini, Villa Caffarelli, until the 27th of February 2022. Let’s take a look at what the exhibition presented.

The Torlonia Collection consists of statues, busts, vases, sarcophagi, and reliefs. All of these artifacts were dated to different periods starting from the 5th century BCE to the 4th century CE. Until October 2021, the vast majority of enthusiasts were only able to see these precious pieces through a catalog that was created by Pietro Ercole Visconti in the late 19th century.

Unfortunately, the catalog of the Torlonia marbles is visually and contextually inadequate. What is more disappointing is that the Torlonia Foundation never attempted to create an online museum experience with 3D scanning technologies or with high-resolution photographs for people who wish to learn about these artifacts. Their website only presents very limited photographs of a handful of pieces.

It seems as though even a global pandemic was still not enough to change their stance on this kind of initiative. However, there is a newly published exhibition catalog of the Torlonia marbles which includes photographs taken by Lorenzo De Masi. The catalogue was published by an Italian company Electa and presents a detailed look at an extensive portion of the entire collection.

Now let’s observe some of the highlights that we fell in love with, shall we?

An Invitation to Dance

This lovely duo is one of the pieces that give instant joy to the viewer. Nymphs and satyrs are inseparable creatures both in Greek and Roman mythology. Throughout the centuries, they were portrayed together by artists and authors. In this instance, the satyr seems to have already begun using his kroupezion/scabellum, which is an ancient percussion instrument that is worn like a sandal and played with the foot.

While he holds a branch of the tree with his left hand, there is a cymbal in his right hand. Therefore, it is safe to say that with his mischievous expression, the satyr is the side who is inviting the nymph to dance. The nymph is calmly sitting on a rock and untying her sandal, preparing herself to embrace the rhythm of the satyr. Both sculptures were dated to the Imperial era according to the foundation.

Statue of Odysseus Beneath a Ram

This is a statue from the Torlonia Collection that will be recognized straight away by lovers of the Odyssey. It portrays the famous act in Homer’s epic poem (Book 9). After the legendary Odysseus and his crew arrive on an island inhabited by Cyclopses, they entered the cave of Polyphemus, son of Poseidon. When Polyphemus caught them in his cave, he ate some of the crew members. Yet, Odysseus was able to save himself and others by blinding Polyphemus with a stick.

When Polyphemus was releasing his sheep to graze in the plains, they took this as an opportunity to slip outside of the cave, in the exact position the statue portrays. Since his only precious eye was taken away, Polyphemus was unable to locate Odysseus who smartly held onto the sheep’s belly because the cyclops only checked the upper side of the sheep with his hands. It is a perfect portrayal of Odysseus’ trickster character.

The exhibition of the Torlonia marbles presented many beautiful busts. You could find busts of emperors from different eras, for example, Claudius, Vespasian, Trajan, Hadrian, Antoninus Pius, Marcus Aurelius, Lucius Verus, and Caracalla. So if you are specifically interested in the era of the Adoptive and Antonine Emperors, you are definitely in for a treat. I particularly fell in love with the bust of Emperor Trajan.

For those who cannot entirely recall what makes Trajan one of the more renowned and interesting emperors, let’s remember together; he was the first emperor of non-Italian origin. He was born in 53 CE into a blue blood family with Umbrian roots. His father, Marcus Ulpius Traianus, was a successful military-man and respected political figure who served as a consul and governor in his lifetime. During his reign, Trajan was esteemed by both the senate and army. He conquered Dacia and with his eastern campaigns, he overcame Parthians and seized the entire of Mesopotamia. His achievements granted him an unparalleled reputation. His exemplary image led the Romans to wish for the new emperors to be “more fortunate than Augustus and better than Trajan.”

Another highlight of the Torlonia Collection is everyone’s favorite Olympian goddess, Pallas Athena, who was born from Zeus’ magnificent head. With her right hand, she reaches to a branch of an olive tree, which was created by herself in the first place. The body of the tree is wrapped by a serpent, which symbolizes eternal growth.

On the top of the tree, there is an owl, which is an animal exclusively sacred to Athena, underlying her wisdom, prudence, and clear-sightedness. Her sizeable shield and helmet symbolize her strategic excellence in warfare. On the shield, there is a gorgon head similar to the one we saw on Trajan’s breastplate in the previous section. Along with its apotropaic characteristic, it points out the terrible fate which the enemies of the bearer will face.

Some Food for Thought

For a considerable amount of time, private ownership of ancient artifacts has been a controversial subject that continues to be discussed by scholars and museum lovers. The question of “who owns the past?” is a question that we all should think about because it limits the public from accessing and observing the artifacts.

It is exceedingly inequitable that this restriction merely occurs because, at some point, an individual had accumulated endless wealth and was able to purchase or have the means to unearth a part of humanity’s heritage. Yet, no one can deny that private ownership led to many of the significant artifact’s survival in many instances. Families such as Torlonia ensured that these artifacts are well preserved and safe from the dangers of the world, namely; wars, vandalism, and theft. Therefore, it is crucial to analyze both sides of the coin.

What do you think about private ownership of historical heritage? How can the owners, like the owners of the Torlonia marbles make these artifacts more available? Join the conversation!