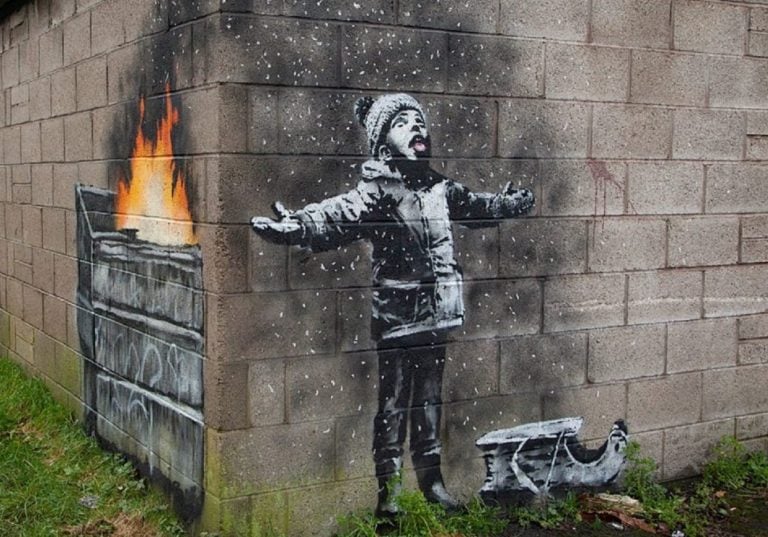 What if a children’s game turned into a frightening nightmare? And what would you think if the cause was… you? In Port Talbot, UK, Banksy created a graffiti showing an imaginary but terrible consequence of pollution, whose victim is a kid and whose cause is (also) you: human beings.

The Artist and His Principles

Nowadays, Banksy is an artist known worldwide. He was presumably born in 1974 in Bristol and no one has revealed his identity yet. Nevertheless, he is one of the major artists in the Street Art scene. His peculiarity lays in particular in the principles underlying his works, i.e. social criticism of problems and absurdities of contemporary Western society. He painted and still paints political, cultural, and ethical themes, such as racism, war, excessive consumerism, animal mistreatment, art commercialization, migration, and of course pollution.

Other unmistakable Banksy signatures are the irony and sarcasm, often included in the paintings, together with their visual impact.

In this sense, Season’s Greetings represents a typical Banksy’s work and makes us all reflect on the serious problem of pollution.

Season’s Greetings suddenly appeared just before Christmas 2018 on the wall of a garage in Port Talbot. Port Talbot is a little town in Wales, which is home to the largest steel plant in the United Kingdom. Consequently, black dust, a byproduct from the giant local plant, has been known to cover swathes of the town. During the summer of that year, a very large number of inhabitants even complained of respiratory issues. Because of this situation, with 9,68 micrograms of particulates per cubic meter according to a report, Port Talbot was presumably crowned as the most polluted town in the United Kingdom. That’s probably why Banksy chose exactly that spot.

This work was removed from its original location in May 2019, after John Brandler, a gallery owner bought it for a large amount of money, to have it exhibited in a gallery in Port Talbot. However, in February 2022 Brandler removed Season’s Greetings from the Welsh town to an undisclosed location (most likely to the University of Suffolk).

The technique is the standard one of Banksy, i.e. stencil. The artist prepares the templates in his studio, taking all the time needed. Then, in just a few minutes, generally during the night, he places the templates on a specifically chosen wall and paints with spray cans.

Season’s Greetings was located on the wall of a garage. The artist played with the corner of the building to create a game with perspectives. As we see on the photos from the original location: on the right corner, a child with winter clothes plays with the snow, even trying to eat it. A dark fog surrounds him and on his side, a sleigh is ready for a ride. The child seems happy like everyone when they can enjoy an afternoon in the snow.

On the left, however, a dumpster is on fire, producing smoke and ashes from the garbage. Smoke and ashes go right towards the child… that was not snow and fog, that was garbage products!

It is now clear how the composition acquired a fundamental role in this painting. That is to say, the characters and elements seemed to be directly standing on the ground. This contributed to the surprise effect. A person walking around could first see the wall with the child, and only thereafter the one with the dumpster.

The viewer went from a reassuring, sweet situation to a real nightmare. The child’s position with open arms also assumes a disturbing meaning now – it may symbolize a cross, so a victim…

Banksy also precisely selected the colors of his works. Season’s Greetings was almost entirely realized in black and white, except for two central elements. They are the red fire on the left, and the pink tongue of the boy. The artist probably thought to underline on one hand the origin and on the other hand the unfortunate destination of the misunderstanding.

The meaning of the oeuvre is clear: environmental pollution is hidden everywhere, just around the corner, and maybe you don’t see it. Everyone can be the victim (even and in particular children!) and everyone can be guilty. As a matter of fact, no one is standing next to the dumpster, because it does not matter who set fire to it. That is to say, what is just important is the horrible result.

The title itself is ironic. Season’s Greetings is the typical Christmas wish, which people write on postcards. On the contrary, the bitterness left by the painting is a very unpleasant greeting.

Let’s listen to the artist and reflect about pollution and environment… There’s no planet B!