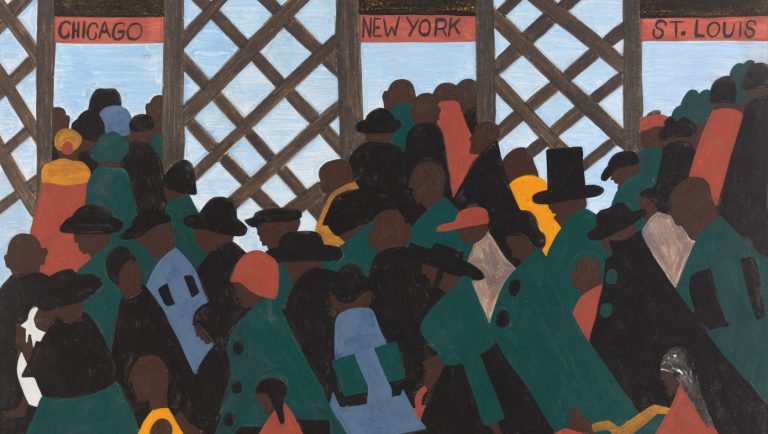 Jacob Lawrence, The Migration Series, Panel no. 1: During World War I there was a great migration north by southern African Americans, 1940–1941, The Philips Collection, Washington, DC, USA. Detail.

Emma Amos: The Story of the Postmodernist African-American Artist

How Art Saved His Life: Story of Horace Pippin

As a child of the Great Migration, Jacob Lawrence was well placed to undertake such a mammoth task in detailing the journey from the rural South that over six million African Americans undertook from 1916 onwards to supply a workforce for the growing industries of North America. Discover the story of Lawrence’s series of paintings and read about their historical context.

The involvement of the United States in World War One meant that the industries supplying the war machine were in dire need of more workers. In the South, floods and diseases were wiping out whole crops and the discrimination faced by African Americans forced many of them to make the journey to what they saw to be a more prosperous and fairer way of life. The risks were high, but many of the migrants felt that they could achieve a better way of life, better education, social mobility, and, most importantly, personal freedom.

For a time, this was the case, but as more migrants arrived in the North, the Midwest, and the West of the country, the reality was not quite as positive as had been earlier described. Overcrowded housing, discrimination, and poor working conditions meant that life was just as difficult here as in the South, with race riots breaking out; the most serious being Chicago in 1919 that left 38 people dead, 537 injured and 1,000 black families homeless.

One of the outcomes was the setting up of black communities within cities with Harlem, in New York City, as an example of this. The experiences of the migrants brought about The Harlem Renaissance: the rise of African American culture through the arts, music, and literature.

Born in 1917 in Atlantic City, New Jersey to parents from the southern states, Jacob Lawrence discovered a love of art following the move to Harlem in 1930 with his mother and sister. Here, Lawrence experienced firsthand what it meant to be part of a cultural movement. His love of art brought him to combine storytelling with the techniques he employed. Lawrence wanted to tell the story of his family and the millions of other people who traveled in the hope of a better life.

In Lawrence’s own words:

To me, migration means movement. There was conflict and struggle. But out of the struggle came a kind of power and even beauty. “And the migrants kept coming” is a refrain of triumph over adversity. If it rings true for you today, then it must still strike a chord in our American experience.

In 1940, Lawrence created 60 panels that tell the story of The Great Migration. Each one was given a caption that told the story in a lyrical format. Repetition, sentence length, punctuation, all combined to give a rhythmic feel to the story. In addition, Lawrence used the wide angle approach to show landscapes, followed the curve of a railway track and focused in on detail in the way a filmmaker might do.

The use of tempera, which dries quickly, gives a reminiscent feel of Renaissance fresco painting, further emphasized by the flattened planes. Unusually, Lawrence painted one hue at a time which meant that all 60 canvases were worked on at the same time. Lawrence used a limited palette of bright colors, using the paint to deliver a symphony of color and brushstrokes, giving the work a “jazz-like” feel to it, as these examples demonstrate.