King Drinks: Jacob Jordaens and the Feast of the Bean King 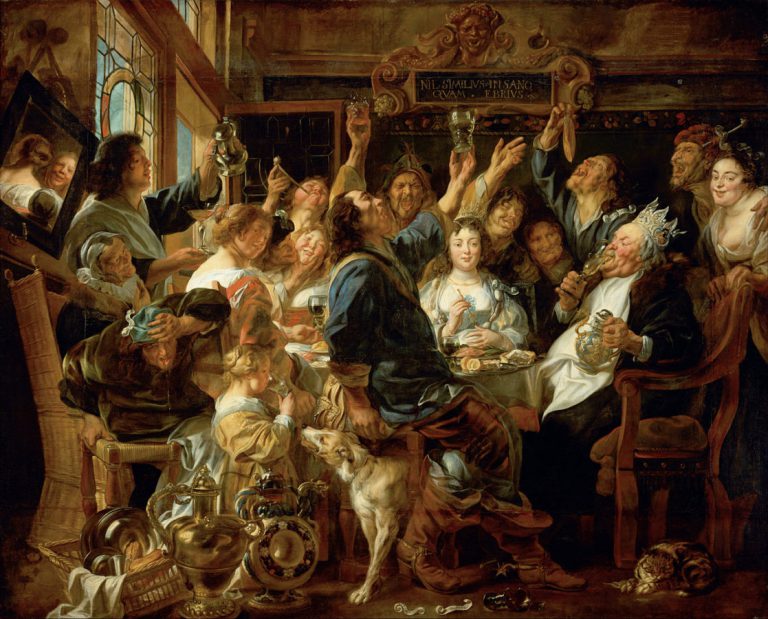 Jacob Jordaens (1593 – 1678), a wonderful artist of the Baroque era, was keen on painting the scenes from peasants’ life. He first painted the famous feast of the bean king in the mid-1630s. Due to the popularity of the holiday, he began to receive regular orders for picturing it again and again.

What is the feast of the Bean King?

A feast with the bean king is a common custom in 17th century Flanders, a secular way to celebrate the Catholic Epiphany. The bean symbolized the guiding star that led the Magi to Bethlehem to worship the baby Christ. Traditionally, the table was set on the evening of January 6, when all religious rituals were already finished, and people returned from church. But the bean, naturally, was kneaded into the dough the day before. The one person who got the bean was proclaimed “the bean king." He put on a fake crown, chose a queen, and appointed a staff of courtiers - from minister to jester.

Royal duties were extremely simple: one had to regularly raise a glass and proclaim “the king drinks!” as an appeal to the participants in the feast to follow the king’s example. Judging by the condition of the characters in the paintings of Jacob Jordaens, it happened often enough. The participants in the feast were then obliged to obey the proclaimed king and queen. When the king raised another glass of wine, everyone had to exclaim in chorus: “The king drinks!” and such feasts dragged on the whole night.

Why was it so popular?

A feast with the bean king was extremely popular both among ordinary people and noble burghers. A nationwide game of the king and his retinue was a good safety valve for overcoming dissatisfaction with the existing order of things. Carnivals in medieval Europe performed this function precisely - butchers dressed up as barons, kings hid under the guise of bakers. During the holidays, people took on the roles of their rulers. It was possible to dress up in their costumes and make fun of them. Carnival, holiday, feast - this is the territory of the game and of freedom, fenced off from the space of public institutions. The drunk paintings of Jacob Jordaens capture this perfectly!

Look at this colorful example! It depicts a noisy and cheerful feast scene in a rich Flemish house. Looking at the lively faces, it becomes clear that the guests have drunk more than one glass. The king sitting in the center - a good-natured gray-haired man - proclaims another toast, and the whole company greets him with enthusiastic drunken cries. The young woman on the right also raises her glass, completely forgetting the baby on her knees. But the men are especially noisy. At the same time, one of them, dressed in a traditional clown-like costume, very shamelessly hugs his neighbor. And her little daughter, seizing the moment, drinks from her mother’s glass.

Culture of the feast of a bean king

We can trace several details reflecting the culture of that time. Individual forks in the 17th century have already appeared, although they were considered a luxury. But at this feast, we do not see any individual devices - only common plates on which the food is piled on. Also, the ritualized nature of drinking - at first the king pronounces a toast, then only the rest raise their glasses. The cup, according to tradition, rises to the sky.

Children and pets are actively taking part in the fun of adults. Obviously, the educational side of this did not worry the Flemish people. Their fun drinking party was the equivalent of watching family movies today. Children as the participants in adult feasts are completely in the tradition of European painting. All the paintings of the bacchanal are always crowded with children and angels.

Interestingly, in all of his feast paintings, Jordaens depicts his loved ones as central characters. The artist was a student and subsequently son-in-law of the Antwerp painting teacher Adam van Noort. Jordaens often captured him as the central figure of the bean king. A good tip to make your father-in-law like you!

A woman with a child is usually Jordaens’ wife Elizabeth, and the most active man, vis-a-vis the bean king in the foreground, is the artist himself.

Jacob Jordaens was not the only one who portrayed this popular holiday. Although in Jan Miense Molenaer’s case, the king does not have vivid detailed attributes and the feast itself is not as big as in Jordaen's paintings.

Jacob Jordaens painted about ten bean kings - huge canvases, each about 2-4 meters on the long side, complex in color and light, with lively multi-figure compositions. The noisy revels were a great success. They fully reflected the character of the Flemish people - direct and simple, sometimes rude, but always cheerful, full of inexhaustible energy.

Read about other Greatest Baroque Painters!

Or try to recreate some artsy feasts at home with Cocktails inspired by Art guide.