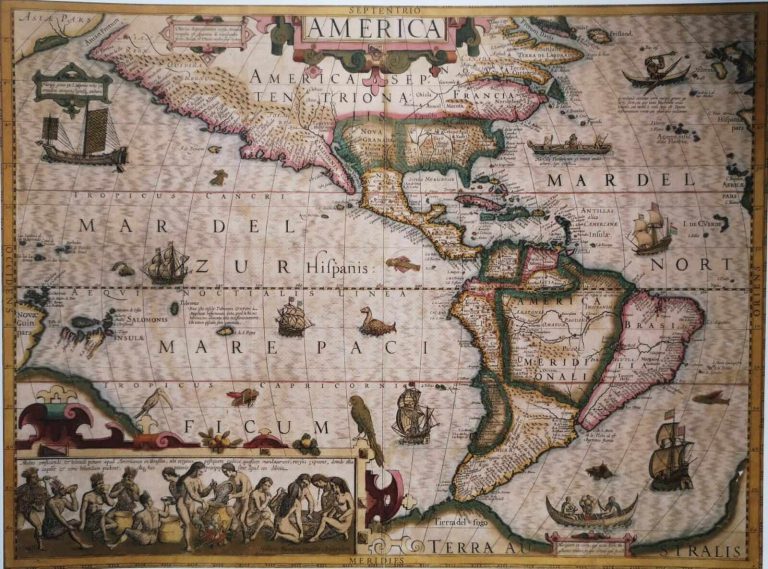 Cartography is the production of geographical maps and globes and it has existed more or less since forever. It can be considered both a science and an art. Why? Let’s travel between geography and art discovering old beautiful maps.

Cartography is a science because it precisely reproduces the world and evolved together with its knowledge. We still use cartography nowadays: the GPS is based on maps and drawings of the world!

Maps have had different aims. Most originally, recording routes and describing territories. Yet, they have become increasingly useful for remembering nautical courses, reporting resources, establishing and recognizing boundaries, and innumerable other purposes. These are the reasons why so many different map types exist, always created according to the contemporary knowledge of the world, and usually limited to a single portion of the world.

In the beginning, cartography did not exist as a profession. Those who drew maps were explorers, artists, or both. Therefore, they not only wanted maps to be useful but also beautiful. That’s why cartography is also an art.

So, over the course of centuries maps became just as much art objects as they continued to be reliable and essential tools. In particular, those created before the invention of printing are unique and exclusive products of particular craft seeing as they were handmade. Even after Gutenberg’s revolution, cartography still remains an art because of its major challenge: how to represent a spherical surface on a bi-dimensional plane?

Science and art—working in concert, accurately representing the world and and depicting something beautiful.

Simple maps to record paths are likely to have been created since the origin of the human race. Then, in Babylon scientists surely acquired the skills to produce more detailed maps, thanks to their extensive studies.

Thanks to Claudius Ptolemy of Alexandria and his geocentric conception, cartography received another positive push. People wanted to know and describe the marvelous world which was at the center of the universe. Nowadays, we don’t have any original Ptolemaic map, but researchers were able to make some reconstructions basing on the information in his oeuvres.

Successively, the Christian culture deeply influenced this subject, as it did in many other fields. This influence gave origin to a completely new representation and conception. Jerusalem was one of the favorite subjects alone, and when the whole world was represented, it was often at the center of the map, being considered the center of the world. Artists began to created the so-called “T-O maps”, where Asia was on top, Europe was on bottom left, Africa on bottom right. The Nile, a vertical line, and the Mediterranean Sea, a horizontal trace, divided the territories. They formed a “T”. The ocean, similar to a circular river, surrounded everything – that was the “O”.

One of the most ancient surviving maps is not an actual map on paper. It is a mosaic in Jericho (Palestine) whose name is Madaba Map. It shows the map of the Middle East during the Byzantine period. Historians think it is the oldest representation of the Holy Land. Madaba Map is currently on the floor in the church of Saint George.

Different factors influenced the definitive development of the cartographic science in the 16th century.

First of all, that century was the age of navigators and explorers. Secondly, the period was coincident with the Renaissance, in the whole of Europe and in Italy in particular. Third, the invention of printing gave the possibility of creating products on a vast scale.

The discovery of America by Europeans played of course a crucial role in this context and from then on a “larger world” should have been represented. Cartographers began creating the planispheres, accepting the abovementioned challenge: how to represent 3D world in a 2D medium?

Speaking about the Renaissance, we can’t ignore Leonardo. He proposed his personal solution to this problem, by dividing into four “triangles” each hemisphere.

However, the most eminent cartograph was probably Gerard Mercator. He was born in Germany in 1512 and brought a number of innovations to this science. First of all, he invented a particular projection in which meridians and parallels on the maps are straight and perpendicular lines. Then, he baptized a collection of maps as “atlas” and finally, especially during his last years, he produced a world map across 18 papers and published two parts of the comprehensive atlas he had projected.

From the 17th century on, maps became less artistic objects and more useful tools, but some exceptions exist! Maps can even transform into satirical provocations.

Would you like to refresh also other school subjects than geography through art? Try literature and history!