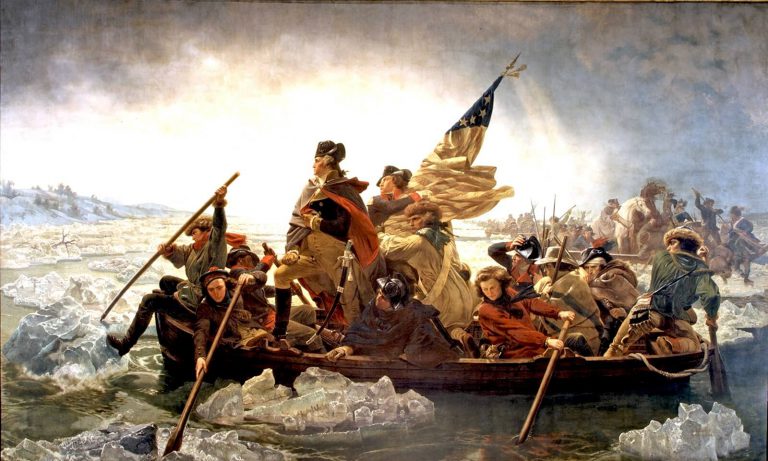 Elizabeth Thompson: The Most Disrespected Artist in Military History

Throughout history, artists have documented the world around them. Consequently, this has culminated in some of the most famous historically-based paintings in existence, both during and/or after the fact. With that in mind, Emanuel Leutze‘s 1851 oil painting is a perfect example of history in art. In fact, it was completed nearly a century after the actual event.

In the 21st century world of immediate media satisfaction, 24/7 news channels, and no privacy, let us pause. Let’s take a look at a 19th-century painting of an 18th-century historical event. Apart from being an epic oil painting, there is more to Leutze’s representation than meets the eye. Of course, the same is true of any representations of the event. In fact, analyzing the painting raises more questions. Did George Washington’s historic crossing of Delaware come close to what we see on Leutze’s large canvas?

History in Art: The importance of such a depiction

December 25, 1776. It is late on Christmas night. General George Washington, along with a few thousand American Colonial troops, is braving the crossing of the frozen Delaware River. They go into Trenton, NJ from Pennsylvania at three different sections of the river.

The plan? To surprise attack a group of Hessian soldiers having a holiday celebration in their camp. The purpose? Hopefully, to raise the morale of the American colonists by completing a successful attack on the camp and it’s inhabitants.

In the early hours of the morning, Washington and most of his men, made it across the river and attacked. On the other side, in the camp, roughly 1,400 Hessian soldiers were recovering from a rowdy night of holiday celebrations.

The group of colonists, led by Washington himself, outnumbered the Hessian army and successfully surprised them. In fact, the attack sent most of the Hessian soldiers scattering from the camp. Most were captured. Consequently, one would think there had been a victory. However, Washington and his remaining men then retreated. The reason for this was that there was a lack of artillery. In addition, the other two thirds of their regiments had not arrived. Thus, as a result, the colonists lacked sufficient back-up. The icy weather had halted them in their efforts to cross the Delaware River.

The Artist: A German-born artist painting a pivotal moment in American history

Emanuel Gottlieb Leutze, born in 1816 in Southern Germany, moved to America as a teenager. It was there that he learned to paint. His early artistic endeavors led to an invitation to paint in the nation’s capitol, Washington D.C. In addition at this time, he actively made art in his ‘hometown’ of Philadelphia as well as in D.C.

In his mid twenties, Leutze made the journey back to Germany to study as the Düsseldorf Art Academy. Throughout the 1850s he excelled there. But in 1860, he returned to the United States. Here he continued producing his legacy of painting historical figures and portraits and this continued until his untimely death in 1868. In particular, he focussed on creating large works of history in art, as is evidenced by the mural below. It is located in the U.S. Capitol Building and measures 20 x 30 feet.

The Painting: Is it fake news?

Historically speaking, the Delaware River extended only 300 yards at the point where the troops crossed into Trenton. However, the grand scale of the painting, combined with the dramatic portrayal of the historical event, would lead one to believe that this was a much wider distance. As a comparison, 300 yards is roughly the size of 3 American football fields. In contrast, George Inness depicts a less icy version of the river along the Pennsylvania border.

At roughly 149 x 255 inches (approximately 12.5 x 21.25 feet), Leutze’s impressive painting hangs in the Metropolitan Museum of Art in New York. And what one notices is perhaps the center of the painting. Here George Washington stands tall and strong amidst a row of boats and soldiers. He conveys the notion that everyone is prepared to stand up for the freedom of the American colonists.

Soldiers row through the thick ice which is covering the river. Their faces are filled with determination. The formation of the army goes far back into the distance, adding much depth to the painting.

While aspects of this painting may ring true to the historical facts, some elements have been changed as the result of the artist’s creative license. In reality, how could the artist have depicted such an event at the time of day it actually occurred? In fact, as we learn from historical records, the winter storm was terrible. Creatively, Leutze has added as much of that element as possible while still maintaining the overall clarity of his painting.