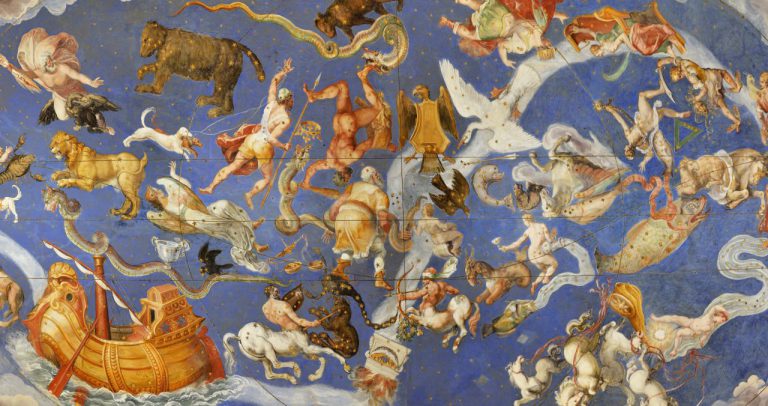 Giovanni Antonio from Varese said Vanosino, Hall of the Globe or of the Geographical Maps, detail of the vault, Palazzo Farnese, 1560-1575, Caprarola, Viterbo, Italy. Pinterest.

Cartography is the production of geographical maps and globes. It has evolved both as a science and as an art. This is why powerful people love collecting artifacts about cartography in special rooms or even commission geographical frescos in majestic halls. Join us in the discovery of three beautiful halls of maps and globes!

Why Dedicate a Room to Geography?

The rich and powerful wanted to travel without leaving home, but also to demonstrate their superiority in terms of culture and money. The realization of halls of geographical maps and globes was a symbol of knowledge of the world, financial possibilities, love for art, and naturally, of the rule of lands. It was a celebration of science and discoveries, but also an auto-celebration of their own power

Villa Farnese, Hall of the Globe or of the Geographical Maps

The Villa Farnese of Caprarola (Viterbo) is a very charming example of a Renaissance residence. The building was initially to be a defensive structure. In 1530, Cardinal Alessandro Farnese commissioned Antonio Sangallo, a famous architect, to build a fortress. However, a few years later, the Cardinal became Pope. Therefore, the work paused. 30 years later, Alessandro Farnese the Younger, grandson of the Pope and a Cardinal himself, decided to retire to Caprarola. In 1555, he commissioned the architect Giacomo da Vignola to conclude the construction changing it to a magnificent residence. The villa has now plenty of elegant floors, rooms, frescos, and gardens.

Many artists, painters in particular, contributed to the decoration of the rooms. The favorite subjects were episodes from the history of the Farnese family, but also mythological and geographical themes. They all contributed to celebrate the power and majesty of the family itself.

A very impressive room is the Hall of the Globe or of the Geographical Maps. The name comes from the frescos depicting the whole world, although the aforementioned “globe” is actually a planisphere. Still today, there is no consensus among experts about the artist responsible for these masterpieces. However, many researchers think that the main artist was probably Giovanni Antonio from Varese.

On the four walls, the artist represented the world. Europe and Africa are on the right, while on the left are America and Asia. Additionally, Italy and Judea are on the bottom wall. On the front wall there is a planisphere, including all the continents except Oceania. Moreover, Greenland is included in America. Besides these little inaccuracies, the planisphere is very precise. How could this be done? The maps and descriptions of the great travelers were fundamental for sure. But that’s not enough to explain such accurate proportions. Some experts think that the frescos could have been updated throughout the following years.

The room also contains another fascinating work on the ceiling, a representation of the Zodiac.

The centrality of the Church is clear from this room. In particular, the artist dedicated a whole wall exclusively to Italy, the location of the Pope, and Judea, home of Jesus Christ. This centrality should have been guaranteed even more in that period of conquers. In fact, the Church thought it should evangelize people all around the world.

Cosimo I de’ Medici was Duke of Florence and then Grand Duke of Tuscany. He was part of a rich banking family and a political dynasty from the 14th century. When he became Duke, he lived in the Palazzo Vecchio in Florence. Cosimo was always a supporter of every form of scientific work and artistic expression. That is probably the main reason for the realization of the Hall of Geographical Maps in Palazzo Vecchio.

When he moved into the palace, he renewed some rooms and ordered the construction of some others. In particular, he desired a place that could be the main room of the wardrobe and at the same time a place dedicated to cosmography. This underlines the scientific interests of Cosimo and also his own celebration as lord of the universe.

Therefore, he asked the great Giorgio Vasari to project the hall. Vasari, working together with cosmographer Miniato Pitti, originally envisioned a very ambitious project (1561–1565). Unfortunately, they completed it only partially. They thought of cupboards with adornments of maps of the whole known world, portraits of all of the great minds of history, and illustrations of exotic plants and animals. Vasari also planned to place two globes (terrestrial and celestial) in the middle of the room. They would have hang from the ceiling and been able to spin. The cupboard would have contained the Medici’s treasures and collections.

Nowadays, the room houses 53 maps painted on leather. They range from Japan to Brazil, the North Pole to the South Pole. The first 30 were completed by Egnazio Danti, a Dominican monk, mathematician, astronomer, and especially cosmographer, while Cosimo I was still alive. After his death, his son Francesco I hired Stefano Bonsignori, a famous cartographer, to complete the remaining 23 maps.

These representations are very accurate and contain curious details such as information about the wind. The illustrated Renaissance edition of Ptolemy’s Geographica as well as innovations in cartography by Mercator were probably the main sources of inspiration.

​In the middle of the hall stands a huge terrestrial globe, again by Egnazio Danti. Although the original idea of globes descending from the ceiling was never realized, the present one was built on a specially designed base, in order to make it spin very easily. However, this is no longer possible since the original base was lost. The second celestial globe was never completed, as well as the ceiling, intended to be decorated with constellations.

But something else was perfectly finished and occulted. The whole Palazzo Vecchio is full of secret entrances and hidden rooms, and the hall is too. Behind the map of Armenia, there is a secret door that leads to a private studio. It had several aims: love, but also tortures and murders… It leads to a stairway with a small opening outside. A convenient back door to the river?

In the Vatican Museums, in Vatican City, there are plenty of treasures and peculiar places. A very particular room is a long corridor before the Sistine Chapel. It is 120 meters in length and occupies 1200 square meters total. It is the Gallery of Geographical Maps.

The walls provide a glimpse of how the Italian world appeared to people about five centuries ago. The gallery displays 40 frescos of maps, depicting in detail different Italian regions and other papal properties as they were during the 16th century.

Pope Gregory XIII commissioned this magnificent work, that then again Egnazio Danti and collaborators realized (1580-1585). The Pope wished to travel throughout the peninsula without leaving home. He had appreciated Danti’s portfolio in Florence, so the solution became clear. He let a great artist realize an accurate representation of beautiful Italy in a specifically dedicated area. The Gallery was evidence of the power of the Pope. Additionally, it was a symbol of a desired united spiritual and geographical unit.

When walking toward the Sistine Chapel, Tyrrhenian regions are painted on the left walls, whereas lands on the Adriatic Coast are on the right ones. The layout of the maps follows an ideal itinerary along the Apennines, a mountain chain that runs through whole Italy.

Each fresco displays a specific region. A box is often present, including a blowup of the main city of the area. But that’s not enough. Some paintings also highlight important battles for Italian history, such as the Battle of Lepanto. Moreover, on the ceiling adjacent to each region, famous religious events that took place there are remembered. There are also the representations of the four most important ports of that time: Civitavecchia, Genoa, Ancona, and Venice. Additionally, there is the territory of Avignon. In fact, it was Vatican’s property in those years, although it is formally in France. Finally, the observer can appreciate two general maps representing ancient Italy and modern Italy.

A very interesting peculiarity is that some maps appear to the visitor as upside down. At that time, placing the north in the upper part of the map was not a definitive rule. And most importantly, when possible, the artists tended to depict maps according to what it would like if you were looking at it from Rome. Look at Calabria: it is the “point of the boot” of the Italian peninsula. But here, it is completely flipped!