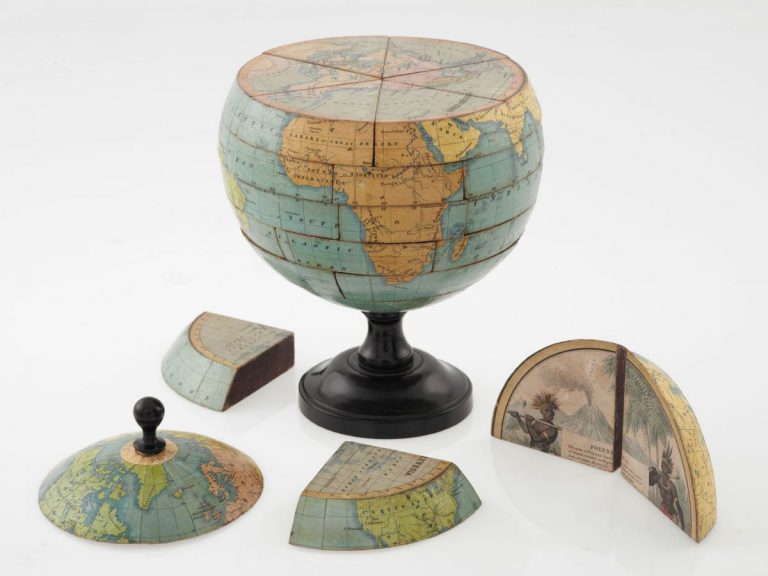 Cartography is the production of geographical maps and globes and it has existed, more or less, since the beginning of recorded history. It could be considered both a science and an art. Why? Let’s discover the charming world of old globes.

The history of globes is similar to that already told about maps, but at the same time different.

As a matter of fact, in the same way as maps, globes were manuscripts until the invention of typesetting. Every example was unique – it was drawn, painted or engraved by hand. Again, similarly to maps and maybe even more so, the design and realization process underlying many of these objects still made them artistic objects even after Gutenberg’s revolution.

A typical characteristic is their three-dimensional form, also the support of the sphere is an artistic element. It can be covered with gold, or can be a finely engraved ligneous structure, as in this case.

The best preserved artifacts we have today are those dating from the 16th century on. This is because in this era they began to be printed, not completely handmade objects, allowing for more copies to be made of the same objects and thus improving the chances of their survival over time. However, thanks to certain evidence, historians are sure that “spherical maps” already existed long before the 16th century.

A primitive idea of making 3-D models of earth probably originated in ancient Greece. A number of philosophers, since Pythagoras in the 6th century BCE, postulated the idea of earth as a sphere. Among the earliest records of an actual earth globe is one quote from Crates of Mallos (around 150 BCE).

However the ancients thought not only that the earth was a sphere, but also the heavens. That is why the history and art of these useful and beautiful objects develop along two parallel lines: the terrestrial and the celestial.

The interest of ancient European populations in representing earth and heavens culminated in the work of Claudius Ptolemy of Alexandria. He strongly encouraged cartography and furthermore, it is likely that he influenced the creation of the earliest extant globe: the Farnese Atlas. This work is now located in the Archaeological Museum in Naples. It is a marble sculpture that features a celestial representation. As in the myth, Atlas is carrying the weight of heavens upon his shoulders.

After some other contemporary examples, knowledge of the ancients declined during the Middle Ages. For many centuries, almost no traces of globes exist.

The Eastern Joy of Knowledge

The definitive idea of the spherical representation of earth and heavens emerged in the Islamic world, around the 9th century. Arabic, Persian and Indian scientists who further developed the concepts of Ptolemy. Their items where usually engraved metal spheres.

Neither did the Chinese population ignore this new cultural and artistic opportunity.

The age of printing and exploration gave new energy to the production of globes. They subsequently became a symbol of knowledge and learning, and their possession was a clue of the owner’s wealth and power. In paintings, they symbolized the physical land owned by a powerful man. On the other hand, explorers and navigators appeared in paintings holding little globes as a sign of their accomplishments, rather than of their possessions.

The first artisan of the field seems to have been a German man, Johann Schöner, a cleric working in Bamberg and Nuremberg. His successor was Gemma Frisius, a professor of medicine and a scientist. Anyway, the modern history of cartography is deeply linked to Gerard Marcator, who besides his work on maps, also realized a large number of both terrestrial and celestial representations (17th century).

During the following centuries, an actual fashion spread and a love for having “the world in the hand” rose. Therefore the ‘pocket globe’ was created! The Earth is the core, while you can see the heavens in the concave form.

Although available to almost everyone in recent decades, globes often remain artistic objects. However, they now play their main role in teaching geography to new generations.

Would you like to refresh other school subjects than geography through art? Try literature and history!