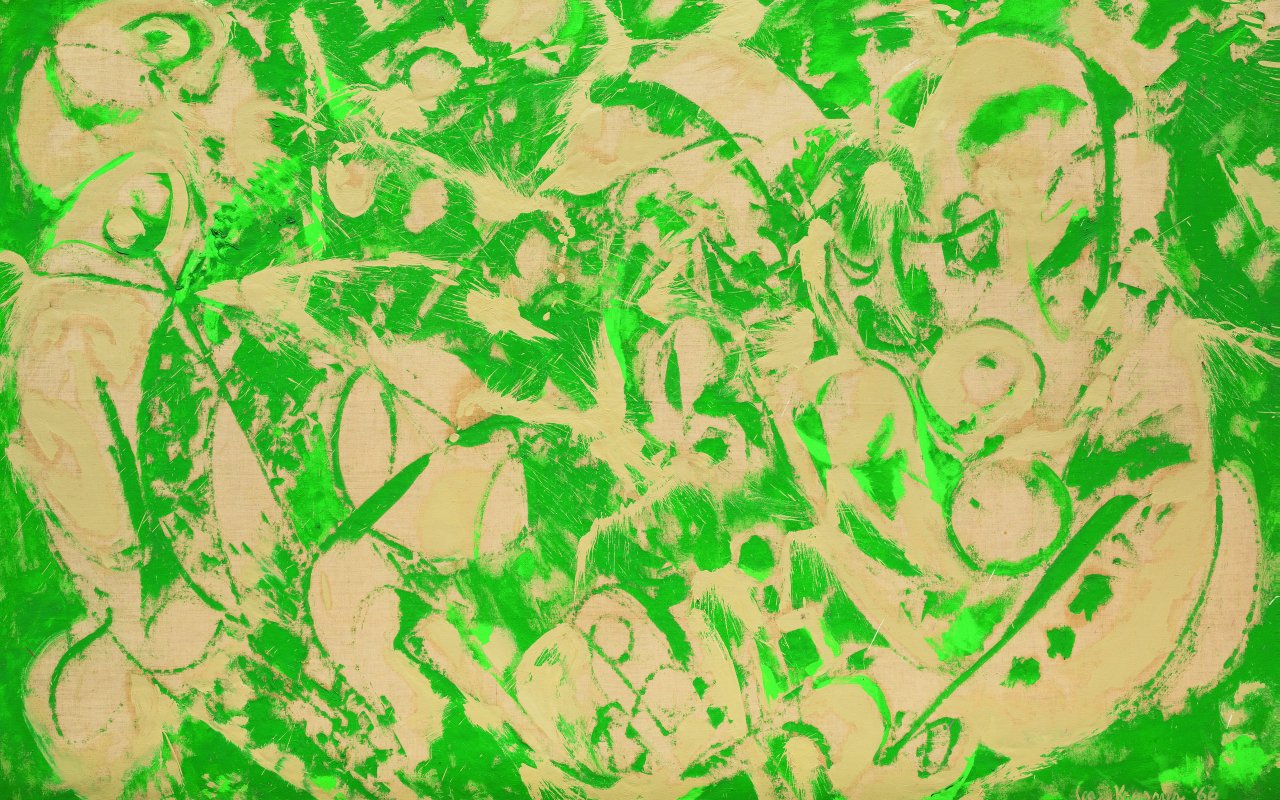 Lee Krasner (1908–1984) is better known as Jackson Pollock’s muse, but lately art critics have recognised her reputation as an artist in her own right. Since 2018, a retrospective of her work has been on tour. Here is a portrait of a very devoted woman and a dedicated artist.

Artists and Their Muses

When both partners in a married couple are artists, it’s very rare that both will be treated as equals in the art world. One will inevitably be celebrated as the famous one, while the other is doomed to live in their partner’s shadow. Take for instance Marina Abramovic and the late Ulay, or Picasso and Françoise Gillot, and there are many others besides.

The work of one artist in a couple often dominates over that of the other. This is what happened in the case of painter Lee Krasner and, yes, her famous husband Jackson Pollock. Pollock has long been the celebrated one, that’s for sure, but Krasner deserves more than to be regarded as just his muse. Although, it’s true that she acted as his muse; she also introduced him to the right people in the artworld. However, her art has often remained unspoken about or treated as just a derivative of Pollock’s.

Why is Krasner Less Famous than Pollock?

So, when critics talked about this artistic couple, it was always Pollock who was the main subject of their conversations. And in the past there were certain reasons for this:

Firstly, when one is already better known than the other, it is often very difficult for the other to stand out. But perhaps the main reason Krasner is less well known is because of the fluctuations in her style of art. She often alternated between a classic structural composition and action painting, and between bright colors and a monochrome palette.

Secondly, it is quite normal for an artist to seek his or her own unique style, but Krasner simply refused to adopt a singular and recognizable style. As soon as she had completed a series of paintings in one style, she voluntarily moved on to another. Only a few artists have adopted this approach and gone on to be successful. On top of that, the members of the group she frequented, the abstract expressionists, are known for their unchanging style. Pollock specialized in his dripping paintings, and Mark Rothko and Barnett Newman in colorfield painting. Whereas, Krasner changed every few years and that way of working doesn’t usually build a sound credibility in the artworld.

An Early Interest in Art

Let’s take a look at how it all started. From her teens Krasner knew that art would have a hold over her for the rest of her life. She enrolled at a technical art school and specialized in the Old Masters, where she excelled in classic anatomical drawings and paintings.

However, with the opening of the Museum of Modern Art in New York, she developed an interest in modern art. In fact, she began to favor abstract art over figurative art. This became clear when, in 1935, the Federal Art Project employed her. She had to enlarge other artists’ designs for large public murals. The Federal Art Project was part of president Roosevelt’s New Deal and was established to provide employment for artists, photographers and theatre designers. It employed some 10,000 people during the Great Depression.

Originating from a working-class background, Krasner needed the job to make a living. But in her artist’s heart, Krasner was dissatisfied working with figurative art. This was quite a jump for her after being at art school only five years earlier.

Still, eager to develop her artistic skills, she continued to study and paint for three years under the tuition of Hans Hofmann. He was a famous teacher and was acquainted with Matisse, Mondrian and Kandinsky.

Having worked at the Federal Art Project and being well educated in art, Krasner was a respected figure in the New York art world. By the late 1930s, she was already friendly with Willem de Kooning and Arshile Gorky. Following her dream, Krasner joined the American Abstract Artists in 1940, which gave her more opportunities to exhibit her work. It also gave her the chance to meet her fellow abstract expressionists, like Mark Rothko and of course Jackson Pollock.

This was very much a man’s world. Almost everyone involved in the American art scene was a man: including the artists, critics and gallery owners. There were only a few exceptions like the gallery owners Peggy Guggenheim and Betty Parsons. A few years later, after joining forces with Parsons, Krasner got the opportunity to hold her own exhibition.

Krasner was somebody who knew what she wanted, but that alone wasn’t enough, she had to prove herself more than her male fellow artists did. Still, it may be that having to deal with the prejudices of being a woman at that time, was what made her all the stronger. During interviews with her from the 1970s, we see a confident artist who didn’t compromise her art and who got to do what she wanted. Girl power!

Despite her struggles within the male dominated artworld, Krasner recollects some praise from amongst her fellow male artists; and from no less than Piet Mondrian, himself, who said her work has:

“A strong inner rhythm, stay with it.”

Mondrian regularly visited the american abstract artists and loved going out dancing with them, something he had in common with Krasner.

Her Own Art Career

Many articles about Krasner suggest that she sacrificed her own artistic career for that of Pollock’s, but when you take a deeper dive into her life, you can see that idea isn’t entirely correct. It is true that there are not many works from the time of their marriage, but that is mainly because she destroyed lots of them. Krasner was a very harsh critic of her own works. She became dissatisfied with her cubist paintings after a while and simply destroyed them.

During this time she saw what Pollock was creating and to Krasner her own work seemed too similar to his. She began to realise that her own artistic career was going to be inferior to Pollock’s. Also, it was during this period that she lost her father, and this had the effect of making her feel very uncomfortable with life and with her artwork.

Krasner and Pollock both worked from home. While Pollock was creating his dripping paintings in the barn next to their house, Krasner continued to experiment with different styles in her own room. But despite them being in separate spaces, she couldn’t fully escape his influence.

Convinced of Pollock’s superior ability, Krasner took up her role as his muse and, you might even say, his mentor. Out of the two of them it was she who had received a firm education in art and it was she who introduced Pollock to modern art history. This allowed him to redirect and develop his painting and gave his works a mature and original style.

It was Krasner though who was gifted with the right artistic language and connections, and it was she that introduced Pollack to the many people that would go on to help him throughout his career. The couple became close with other abstract expressionists, collectors, and critics.

In the mid-1950s, Krasner experimented with multimedia collages as demonstrated in the above work, Milkweed. This led to an exhibition in New York City in 1955. In fact, the inspiration for these collages came from an earlier period. Years before, she had started painting her hieroglyphic, Little Images, series and other geometric works. She created The Little Images series with layers of thick paint, often squeezed straight from the tube. The composition could be read as Hebrew letters, which was reminiscent of Krasner’s youth. But she also used Pollock’s drip technique of holding the paintbrush close to the surface of the canvas. However, for the critics, this was a sign that she was inspired by Pollock’s work. Even worse, that she was imitating his art.

The fact about being inspired by Pollack was probably true, but these critics forgot to mention the mentor’s role Krasner was playing in her husband’s work. It was highly unlikely that she was simply copying him.

After a failed exhibition at the Betty Parsons gallery (she sold none of the paintings), Krasner said that she started ripping to shreds all her works from that exhibition. Whilst looking at the fragments lying on the floor of her studio, she had the idea of reassembling them into a series of collage paintings. This turned out to be better commercially for her and she sold the works during her 1955 exhibition.

The Umber and White series

In 1956, fate struck the couple. Whilst Lee was in Paris, France, escaping from Pollack’s escalating alcoholism and bad behaviour; Jackson crashed his car, in a deadly drink-driving accident near to their farm, and he was killed instantly. Then just three years later, in 1959, Lee’s mother died. After these events, Lee struggled for a long time with grief and consequently suffered from insomnia.

However, painting was Krasner’s life, and she began working at night when she was unable to sleep. She let her emotions roll out into her paintings, which she created in the same barn that Pollock had used to paint his drip paintings. This creative period resulted in the Umber and White series, which show a sombre palette (she only used white and umber).

“Painting is not separate from life. It is one. It is like asking do I want to live? My answer is yes. And I paint.”

In the past, Krasner had supported her husband in building his connections because she had believed in his talent from the very first. When he died, she became the executor of his estate and once again,demonstrated her support for Pollock’s art,even after his death.

Krasner was generous with Pollack’s work, lending it out to museum and gallery collections. But spending time on his estate meant less time for her own art, but that didn’t seem to bother her. She realised that when people spoke or wrote about her, or her work, it was always in connection to him. It seems to be the fate of the muse to always be linked to the artist.

In the years that followed, Krasner continued painting in a manner that varied between collages and action paintings. Her grief slowly slipped away, and she began to introduce brighter colors into her compositions. This led to an exhibition, in 1965, at the Whitechapel Gallery in London. Ten years later, a retrospective opened at the Whitney in New York. And in 1984, the MoMA (Museum of Modern Art) in New York honored Krasner with a large retrospective of her work. This was quite an achievement as just over 10 years before, she had been on the steps of the very same museum, protesting in favor of female artists being added to its collection.

Lee Krasner passed away a couple of months before the MoMA retrospective was due to open.

The Swiss Zentrum Paul Klee in Bern holds a retrospective on the artist – Lee Krasner Living Color. It’s open until 16.08.2020.

Katie McCabe writes in her new book More Than a Muse about the artist Lee Krasner and other muses.