The Artists Are Present – Marina and Ulay 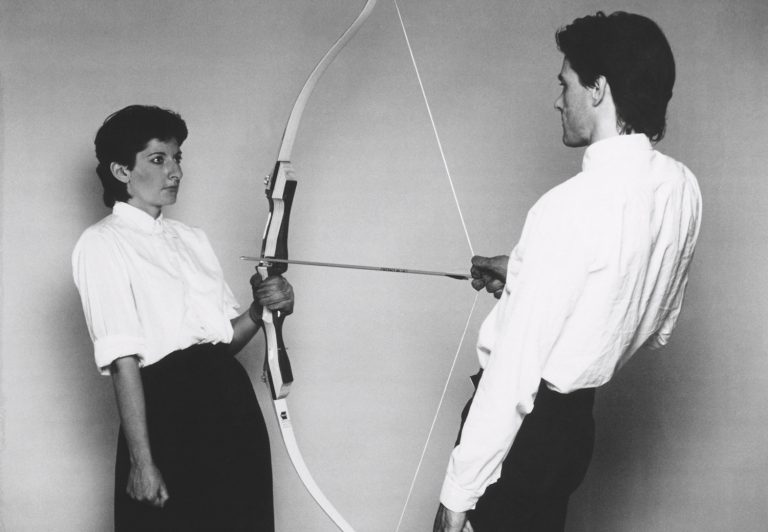 Pablo Picasso and His Women

Balkan performing artist Marina Abramovic was born in 1946 in Belgrade, Serbia. Ulay (Frank Uwe Laysiepen) was born on the same day as she, a few years earlier, in another place, Solingen, Germany. They met for the first time in 1975 in Amsterdam, on the day of their joint birthday. She was 29, and he was 32. Also on this day their long term artistic partnership began.

When they started living together as a couple and collaborating as an artistic duo in 1976, their main interest was to create performances and actions exploring physical and psychological limits. They blurred the line between art and life and made themselves the protagonists of their projects as tableaux vivants. They shared an unconditional love, artistic partnership, and bond beyond life and death. Living in a van in Tibet, they traveled, experimented, destroyed each other, moved, adored each other and worked together from 1976 to 1988 to create all these breathtaking performances we are going to explore.

It was July 1976 when 300 visitors of the Venice Biennale witnessed the 58-minute performance of two bodies of Marina and Ulay repeatedly passing and bumping into each other. In the same manner as the other 13 performances from the Relation work series, the basic principle is: no rehearsal, no predicted end, no repetition. Approaching each other from different sides their contact starts by touching each other almost accidentally but then the walking gradually turns into running. Their contact increases into a climax and due to this emotional development, the whole performance turns into an entirely different experience from what it looked like at the beginning.

The performance Relation in Time which took place at Studio G7 in Bologna, Italy, is a part of the performance series titled That Self. Abramovic and Ulay were tied together by their hair, each looking in a different direction. They sat alone in silence for the first 16 hours and visitors were allowed to attend the final hour.

John Cage, a famous composer and one of the leading figures of the post-war avant-garde who had a great influence on Ulay and Abramovic, called this performance “activity within inactivity.” The whole process was very demanding for the artists from both physical and mental points of view. They were looking for harmony between body and mind as well as an equilibrium among genders. This action revolves around the concept of polarity and tends to create an androgynous creature. It was a kind of continuation of Ulay’s previous artworks where he focused his attention on the gender question emerging in 1960s.

Next we go to Paris, 1977. Marina, Ulay, and their dog Alba are driving in their van round and round in circles inside a city square approximately 25 x 25 square meters in size. Ulay is behind the wheel, while through the open window Marina is shouting out the number of completed circles with a megaphone in her hand. As the couple had been living in the van for 5 years in an almost nomadic state the whole household was engaged in the performance.

In 16 hours they made 2226 circles and in the meantime, a black circle of tire marks appeared from the overheated vehicle. The circle could symbolize the circle around each other in a relationship or always moving around in the same circle of thought. Or maybe it could stand for the idea that life or the relationship itself is cyclical and should be perceived as endless.

At the opening of an art exhibition in June 1977, the artistic couple stood naked at the entrance of the Galleria dell’Arte Moderna in Bologna, Italy. They were standing opposite to each other in such a way that only a small space between them was left. The visitors had to pass through this gap between the two, unable to avoid physical contact. The crucial factor was that visitors had to decide whom to face as they passed.

Marina and Ulay kept looking at each other motionless and without any facial expression like statues forming a physical frame and confronting the involuntary participants to decide which side to face while exposing them to an uncomfortable experience. In this way, the viewer plays an active part in the performance and can experience various sensations from shame to an awareness of their own body. The definition of the word Imponderabilia or imponderable means: not ponderable: meaning incapable of being weighed or evaluated with exactness. In the same way, it is impossible to value with exactness the reaction of each visitor.

The 20 minute performance Light/Dark took place for the first time in October 1977 at the International Art Fair in Cologne, Germany. One year later it was filmed by Luis van Gasteren in a studio in Amsterdam. Ulay and Marina face each other in a kneeling position and take turns slapping each other hard in the face. Due to the strong light shining onto their faces, they cannot see the partner’s slap coming from the dark. Light/Dark reflects on the relationship between man and woman. However, it is not about pain or physical harm, despite the fact that slapping is normally associated with hurting someone. As Abramovic says:

It is not the pain itself that matters. We never did things for the pleasure of pain. We were looking for a key, a way to break through the body, to open something up, which is a desire that comes from another side of truth or reality.

This performance was recorded in April 1977 in Belgrade and pursues the question of duality. Ulay and Marina connected by their mouths share their breaths without external access to oxygen. Thus they depended on each other to stay alive for almost 20 minutes and ended up collapsing. Metaphorically, this action deals with the death of the self, trying to unite and absorb one another’s lives until their destruction.

This performance from 1978 with no audience in Liège shows the couple yelling at each other. It was a follow-up to Freeing the Voice, a Marina Abramovic solo-performance from 1976 in which the woman artist shouted herself out. The whole action centers on the relationship between two lovers and the purification of body and mind.

Rest Energy, recorded in 1980 at Filmstudio in Amsterdam and part of the That Self series, is one of the most life-endangering performances by Marina and Ulay. Each of them held in their hand one item: Marina a large bow and Ulay an arrow pointing directly at her heart. The result creates a dense tension. From the microphones attached to their clothes a quick heartbeat and irregular breathing for seemingly infinitely long four minutes can be heard. The performance ended at the dropping of the bow.

Nightsea Crossing is a series of 22 performances that took place between 1981 and 1987 in 19 different locations around the world. For each performance the same two chairs and mahogany table were used. What varies is the setting (museum or an open space environment), the day, and the color of their clothing (often monochromatic). The artists described the performance like this:

Nightsea Crossing is an epic 90 days work in which a period of fast and silence is involved, prior to and during the actual performance. The performance consists of seven daily hours of concentration while sitting motionless in a state of tranquillity.

Both artists, sitting on chairs facing each other, explored their inner consciousness without any psychological obstacles (the only physical obstacle for them was the table). They did not eat nor drink during the performances, nor directly before or even afterwards. Nightsea Crossing is about concentration and control over the body. It is about being present for long periods, until presence rises and falls, from material to immaterial, from form to formless, from instrumental to mental, from time to timeless.

In Nightsea Crossing Conjunction, which took place in April 1983 at Fodor Museum in Amsterdam, the rectangular table was exchanged for a round one, made especially for the occasion and wrapped in gold foil. To make it different and exceptional, Ulay and Marina invited in this “silent symposium” two other guests: a Lama from Tibet and a member of the Pintupi tribe from the Central Australian Desert.

This rare Nightsea Crossing is apparently about the symbolism of the number four. Four chairs around the table faced north, south, east, and west. Four days in a row, four participants dressed in red or orange, sitting for four hours at a time, without exchanging a word. The performance was held at specific times of the day: sunrise, noon, sunset, and midnight. Due to the universal number of four, which can be found in all parts of the performance, the artists reached a level of conjunction and integration into a larger cosmic structure.

In 1988, Ulay and Marina decided to end their relationship with a legendary performance which became also the endpoint of their collaboration. For the project The Lovers: The Great Wall Walk the artists started walking from different ends of the Great Wall of China to later meet in the middle and say goodbye to each other. Ulay started his path in the Gobi Desert and Marina began at the Yellow Sea. They set out on a journey through one of the seven wonders of the world to hug each other in its midst for the last time. Their separation measured 2,500 kilometres and lasted three months. 2,500 kilometres to say goodbye, 90 days, two people, two paths, one common destination. If nothing else, The Great Wall Walk has to be considered the perfect end of the common oeuvre.

Last but not least, I would like to mention Marina’s performance in 2010 which took place in the Museum of Modern Art in New York. For two and a half months, Marina Abramovic sat at a chair, in front of her was a table, again, as in the Nightsea Crossings. The opposite chair invited viewers to sit and engage in a silent conversation in front of a live audience.

Dozens, hundreds, thousands of people attended. Then a man comes to the table, whose movements indicate that he won’t be just an ordinary spectator. When his gaze meets the gaze of the hostess, everyone knows why. It’s Ulay. What happens next is three minutes of unprecedented sadness and beauty at the same time. During their brief encounter, they shared so much without saying a word, a non-verbal exchange of curiosity, feeling, and understanding. What happened next you can see here: