Wild Women of the Waves – Art of Ships Figureheads 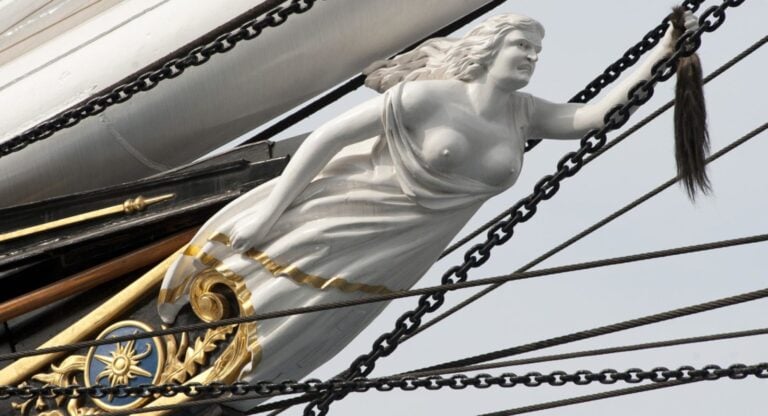 A figurehead is a carved and painted figure ornamenting the bow of a ship (that’s the front to us landlubbers!). For thousands of years, people have been carving and imaginatively decorating the vessels which they take to the water. Let’s see some of them!

Many figureheads relate to the name of the vessel, or to the owner, although some are simply random decorative devices. Caryatids, allegorical figures, putti, gods, warriors, and other symbols are all borrowed from high art. The style will often derive from whatever artistic or architectural ideas are most popular on shore at that time.

The commonest modern design by far is the human form, sometimes full-length straddling the bow, or sometimes a bust or head. Royalty and great literary figures abound, but this is one area of art where women get equal billing as the wife or daughter of a ship owner is as likely to make it onto a figurehead as a statesman or a soldier. Queens and Goddesses are hugely popular, from Nike to Queen Victoria. Strong, protective and windswept globe-trotting figures – quite the feminist statement for unequal times.

Because of the nature of their environment (windy, salty, stormy conditions), few figureheads survive today. Very few sailing ships made it to the modern age and shipwrecks were frequent amongst early merchant vessels. However, saved figurehead examples, from breakers yards or salvaged from wrecks, can often be seen in coastal town museums. The Maritime Museums of Liverpool and London have some very fine examples.

Interestingly, we know most about the history of the figurehead from other art forms. They are recorded in drawings, paintings, and book illustrations. They can also be found on coins, mosaics, ceramics, tapestries and in church carvings.

To the earliest seafarers figureheads had religious/spiritual significance. The earliest figurehead was in fact the actual head and skin of a real animal. The worldwide superstition about installing a protective figurehead and not removing it has continued to this day. Then, as now, a figurehead signified artistic skill and prestige, tribal allegiances and ownership.

The figurehead is a global phenomenon. Maori war canoes carried carvings and figures. Pacific Islanders and Native Americans also carefully decorated their boats with mystic rites. Viking long ships looped their bows with serpents and dragons. The Romans chose the swan, the Greeks chose bronze boars. Phoenician traders identified themselves with the horse, Carthaginians chose Amun the ram. Ancient Egyptians used holy birds, and painted eyes to “see” their way across the waters.

Boat design and social/political movements had an impact on figurehead size and placement. In Britain in the Middle Ages, the figurehead was crowded out from the bow, replaced with platforms or “castles” for fighting purposes. Later, gothic forms of heraldic flags, shields and banners proliferated.

In the 16th century, there were big developments in decorative arts on ships. Through the 17th and 18th centuries, lions and horses were a favorite of the British, when warships proclaimed their power and aggression as they competed for trade and empires.

From the mid-18th century onwards the human figure more or less replaced animals, and elaborately carved pieces were highly regarded. At this point in history, a ship was a source of pride as well as profit. The new breed of fast clipper ships and reliable ocean-going steamers all bore figureheads. However, the great cost and weight of these magnificent figureheads began to eat into the time and money spent on build safety. The Royal Navy intervened, and excessive work was halted. An outright ban on figurative carving for ships was not successful, as the tradition (and superstition) of figureheads was impossible to eradicate from seafaring communities.

We know little of the craftspeople carving or casting these masterpieces. Some are blunt, clumsy pieces, others sport finely carved draperies and have expressions rendered with great care and feeling. Workers almost certainly used the standard wood carvers’ tools, and would have served apprenticeships. A Dutch school of marine artists was led by the father and son of Van de Velde family. But individual carvers were rarely mentioned in reports of new ships. Many shipwrights were illiterate and anonymous, they made their living from carving shop signs, carousel horses and religious figures for churches.

There are very few carvers today, although a handful manage to make a living with the fashion for recovering and restoring old sailing ships. Maritime arts are a fascinating combination of artistic ornamentation and practical craft skills. Is it fine art? Probably not, but it is beautiful.