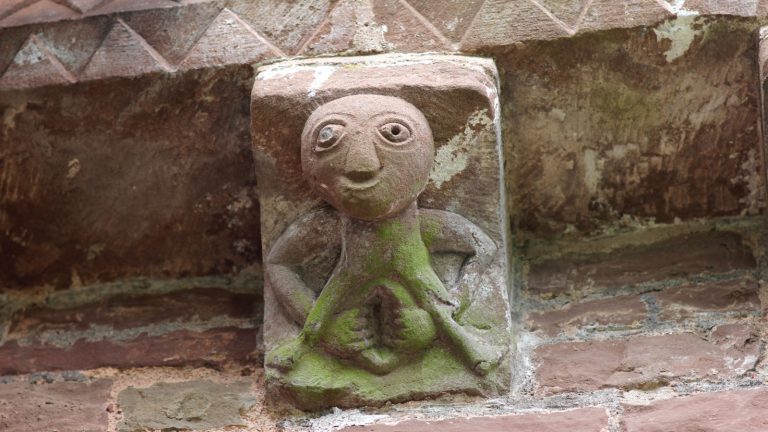 Everyone remembers their first sighting of a Sheela Na Gig. Wandering around an old church, breathing in the architecture, the history, the silence. And then – that looks like, oh, yes, it is – a naked woman, exposing her genitals to your gaze. What is a Sheela Na Gig and how has it influenced modern art?

Hidden in plain sight, these wooden or stone sculptural figures can be found in churches across the UK and in central Europe. Let’s take a closer look at these fantastic creatures.

No-one can definitively explain the exact purpose of the stone carvings. Sheela Na Gig is generally believed to be a pre-Christian deity or fertility symbol. She almost always has exaggerated genitalia. She is depicted with a fruitful womb, but with an older, crone head. Is this the Earth goddess who both births us, and then takes us in death?

The figures are often depicted in a birthing position. There are suggestions that they are a folklore talisman used for promoting a successful birth – a mascot of the midwife if you will. As remember, in the past many women would have died during childbirth.

Still others suggest they are simply part of the Romanesque sculptural style of art. In which, gargoyles and other fantastical creatures were used in the decoration of both churches and secular buildings. They may have been comical in-jokes by stone-masons, or a magical protection used to scare away evil.

Of course, for many in the Church these are shameful and obscene images. Clerics claim they are a warning against the sin of female lust. Personally, I don’t buy this theory. I think that many people are disturbed and affronted by imagery of a joyful, powerful, explicitly sexual female, and their responses are driven by fear and misogyny. Angry congregations have campaigned to get rid of some carvings, as in Easthorpe, Essex, UK. Where a statue deemed ‘pornographic’ was hacked down and given to the local museum. Others have been similarly defaced. Literally thousands of wooden Sheela Na Gigs have been burnt. However, many communities celebrate and share their Sheelas.

This kind of fruitful goddess image is, of course, an ancient portrayal that has been seen across the globe since pre-historic art was first practiced. See this article on ancient sculpture.

Remember the famous Woman of Willendorf. A couple of years ago, artist Nina Paley made some fun gifs using some of the world’s most famous female statues.

What is interesting about the Sheela Na Gig, is that it was so popular in churches around the time that the last vestiges of pagan Goddess worship were being eradicated across Europe. Are these the last defiant images, left as a reminder of the power of women? Power stolen by the misogynist politics of the Christian Church?

And as for the name? Again, debate rages. There is no true etymological meaning for the name, and it is highly unlikely they were called Sheela Na Gig by the original carvers. Apparently, St Patrick was married, and his wife’s name was Sheelah – is there a connection?  Many suspect that each had her own name, and that Sheela Na Gig is the name of one particular carving that was then used to describe all of the carvings. In Ireland, a variation of the word can be an ancient name for a hag or old woman. In Northern England, ‘gig’ was slang for a woman’s genitals. There are as many theories about the name as there are carvings, and in truth we will never know.

Today, these ancient and often damaged figures continue to inspire awe and debate. As feminist scholarship has reclaimed female sexuality and the power of the female figure, artists explore and re-imagine the female body. Take a look at Judy Chicago’s The Dinner Party, shown above. Or listen to PJ Harvey who wrote a famous song about the Sheela Na Gig!

And last but not least, the Vagina Museum in London is well worth a visit.

Do you have a local Sheela Na Gig? Share your images! The Sheela Na Gig Project is keeping a photographic archive of all sightings.