The Spirit of Ecstasy – A Story of Goddesses and Secret Affairs 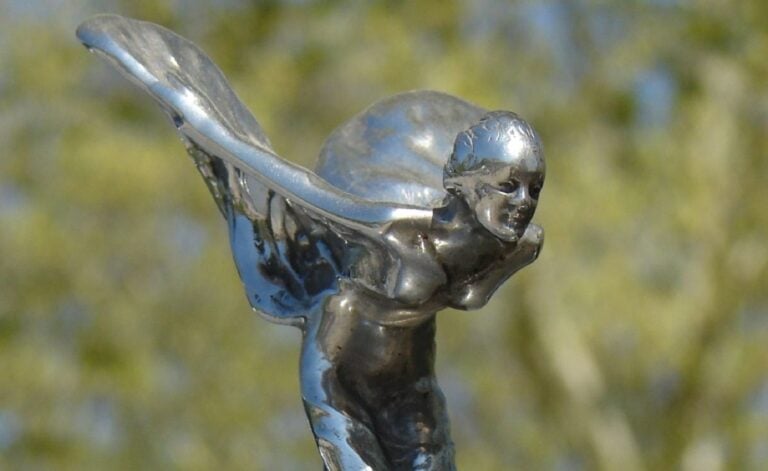 The story of the Spirit of Ecstasy is one to be pulled from the gossip columns of London high society. It involves rich and aristocratic benefactors, beautiful women and secret affairs. Join us on a journey spiced with intrigue and tragedy, that takes us from Second Century goddesses to the modern world of luxury motoring.

The Spirit of Ecstasy is the ornament found on the bonnet of the Rolls Royce car. It is in the form of a woman leaning forwards with her arms outstretched behind and above her, billowing cloth running from her arms to her back, resembling wings. It has become an iconic symbol of luxury and elegance.

It was a British Conservative politician (and promoter of motoring) who commissioned the first of these bonnet ornaments. That was Lord Montagu – his full title is, in fact, John Walter Edward Douglas-Scott-Montagu, 2nd Baron Montagu of Beaulieu. But let’s stick with Lord Montagu! He approached his friend, the sculptor Charles Robinson Sykes, a Royal College of Art graduate, who developed the first figure as a woman standing on one foot, with her gown flowing behind her, holding one finger to her lips as if keeping a secret.

The model for the figure was Eleanor Velasco Thornton (known as Thorn). Only a few castings were made around 1911 and few survive. Thornton was secretary to Montagu and, as gossip would have it, mistress too. This figure made by Sykes was called, intriguingly, The Whisper.

After seeing this first model, Claude Johnson, managing director of Rolls Royce, asked Sykes to design a graceful mascot figure that would ornament all future Rolls Royce cars. His brief was to convey the spirit of Rolls Royce namely, ‘speed with silence, the absence of vibration, the mysterious harnessing of great energy, and a beautiful living organism of superb grace’.

Johnson had in mind the ‘Winged Victory of Samothrace’ statue in the Louvre. Winged Victory (or Nike) is the goddess of strength, speed, and victory and is often seen with wings.

But it seems Sykes felt a more feminine, softer representation was needed and he continued to use Thornton as his inspiration, with that voluptuous cloth billowing out behind as her ‘wings’. However, just like ‘Winged Victory’, she faces into the wind, with a sense of movement and triumph. We may not adorn our ships with figureheads anymore, but the notion of the figurehead signifying artistic skill, prestige and ownership lives on in the luxury car market.

According to sources, the secret passion between Montagu and Thornton survived for 10 years, known to only a handful of close friends. Thornton had poor social and economic status, and Montagu was already married to Lady Cecil Victoria Constance Kerr.

The figure has had eleven incarnations, names and sizes, from ‘The Whisper’ to ‘The Spirit of Speed’, to its current name of ‘Spirit of Ecstasy’ and is colloquially known as Emily, Silver Lady and Flying Lady. Kneeling versions were introduced for smaller sports cars and the current version has a luxury defense mechanism. If anyone applies any pressure to the ornament, the car recognises what is happening and immediately retracts the figure into the bonnet.

Originally silver-plated, the mascot was changed to nickel or chrome alloy after 1914, to dissuade theft. Today’s models have been digitally sculpted to resemble Eleanor Velasco Thornton and are hand-cast using the lost-wax process. Today your Spirit of Ecstasy can be stainless steel, 24-carat gold, illuminated frosted crystal, or even matte black and studded with diamonds!

Our love story ends sadly, however. Eleanor died on 30 December 1915 when the SS Persia was torpedoed by a German U-boat. She was accompanying Lord Montagu to India. He was thought to have perished too, but was saved after several days clinging to an up-turned life raft.

This article is part of a distance learning course about to be launched by Aberystwyth University in the UK. Called ‘Figuratively Speaking’ the course explores the history of western sculpture from some interesting perspectives. For more on Lifelong Learning with Aberystwyth University go to www.aber.ac.uk/en/lifelong-learning/