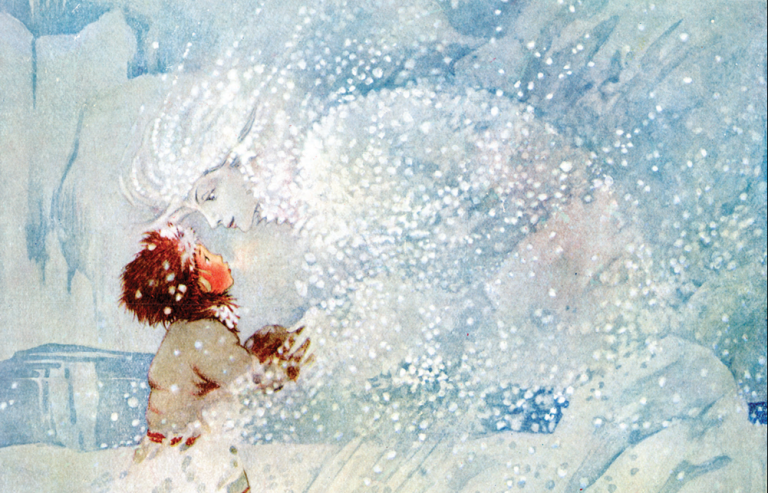 The Snow Queen is one of the most beautiful winter tales. It was originally published on December 21st, 1844. The fairytale has been continuously printed in different editions, with many artists illustrating the story. If you’re already missing winter and Christmas vibes, this article is perfect for you! Let’s dive into the book illustrations of The Snow Queen.

The Snow Queen is Hans Christian Andersen’s longest story. Rumor has it that Andersen wrote it after a love disappointment. He fell in love with Jenny Lind, a Swedish opera singer, but she didn’t see him that way. So, Andersen wrote The Snow Queen. However, the two remained friends. This magical fairytale has inspired many others in literature and in the movies. It influenced C.S. Lewis in writing The Lion, the Witch, and the Wardrobe, the first book of The Chronicles of Narnia. Also, the 2013 Disney movie Frozen has clear references to The Snow Queen.

The Snow Queen is basically a battle between good and evil, as Gerda and her friend Kai experience it. Nevertheless, this isn’t the only symbolism in the tale. But before we talk about the symbols and their meaning, we have to mention some of the illustrators over the years. Vilhelm Pedersen created the illustrations for the original book in 1844. They are typical of the time, as they look like engravings. Rudolf Koivu, Arthur Rackham, Edmund Dulac, Jennie Harbour are some of the others who also illustrated the story over time. In addition, the most recent ones are by Boris Diodorov and Sanna Annukka.

The Story of The Snow Queen

Once upon a time, the Devil, in the form of an evil goblin or troll, created a mirror that distorted beauty and reflected everything as if it was bad and ugly. Along with his fellows, they took the mirror around the world to distort people’s reality. They even attempted to take it to heaven, in order to ridicule God and the angels. But as they went higher and higher, the mirror began to shake. Eventually, it fell out of their hands and broke into billions of pieces. Some of them were as small as a grain of sand. Due to the winter wind, the pieces scattered around the Earth and went into people’s hearts and eyes. They froze their hearts and infected their eyes such that they could only see ugliness, just like a troll.

In the human world, there are two children, Kai and Gerda. They had joined balconies with pots of roses. They played together and listened to Kai’s grandma’s fairytales.

But one day, Kai saw the Snow Queen and a few days later, a grain of the mirror got into his eye. So, he became aggressive towards Gerda and mean to his sweet grandma. He only wanted to play with the older boys of their village and observe the snowflakes. One day, Kai took his sled to go to the town, and there he saw the Snow Queen again. She took him with her on her sled and left the place.

Looking for Kai in the Flower Garden of Spring

Gerda was devastated that her friend was missing, fearing he was dead. She offered her new red shoes to the river in exchange for Kai. But the river only replied that he hadn’t drowned; he was very much alive. So, Gerda climbed on a boat and drifted on a world way far from her home. At some point, she met an old sorceress with a beautiful flower garden of endless Spring.

The old sorceress didn’t want Gerda to leave so she made her forget about Kai. Moreover, she made all the roses from her garden disappear, as they reminded Gerda of Kai. Nevertheless, Gerda saw a rose on the sorceress’s hat and she started crying. She remembered Kai. Her warm tears made a rose bush grow. The bush told Gerda that it could see all the dead underneath the earth, and Kai was not among them. So Gerda, with new hope, left the sorceress and the garden to look for her friend.

A Princess’s Palace and Autumn’s Thieves

While she was running in the forest, Gerda met a crow. It told her to go to the palace of the princess of Summer because Kai was there. But when Gerda arrived and met the princess and prince, she realized that the prince wasn’t Kai, even though he looked like him. She told them her story and they gave her warm clothes and a carriage.

On her way to find the Snow Queen, Gerda reached the realm of Autumn, where she was captured by robbers. In their castle, she met a little girl, whose doves informed Gerda that Kai was in the Snow Queen’s palace, further north, in Lapland. The little girl helped Gerda to escape.

So, Gerda traveled even further north and found the Snow Queen’s palace. The moment she entered the palace, she found Kai blue and almost completely frozen. The Snow Queen had deserted him in her throne room. Gerda ran to him and started crying. Her warm tears melted the ice from his heart. When Kai realized that Gerda had found him, he also started crying, removing the mirror’s grain from his eye. They both left the castle and returned happily to their homes, only to realize that it was finally summertime.

Symbolisms and Innovations of the Fairytale

The story narrated above is just a synopsis of the novel. However, we can observe certain motifs and symbols that are worth analyzing a bit further. First of all, it is not a typical Andersen fairytale. While it is common in fairytales – not only in Andersen’s tales but in Snow White and Sleeping Beauty and others – that the male hero saves the female, in The Snow Queen, we have the opposite. The main character is female and she is the one that saves her friend from the cold abyss. Also, usually in fairytales, the villain suffers in the end or receives a kind of punishment. In The Snow Queen, we never learn what happened to her. She just disappears, having left for other places, leaving a hint that she will come back, as she is the Winter.

The omnipresent symbols of this fairytale are the ice and the snowflakes. Along with the mirror, they symbolize the unhealthy cynicism that destroys youthful innocence. Indeed, when Kai was infected, he was no longer able to see beauty around him. He wanted to play with the older boys; he disrespected his grandma and neglected Gerda. All because of that piece of mirror that got into his eyes. This signifies that it is individual circumstances that shape someone’s views and behavior, meaning that it is not necessarily the person him or herself that should be blamed.

Anyone can be cured of their toxic traits. However, Andersen was a hopeless romantic who lived in another era. Anyone who lives in today’s world can verify that this is not always the case.