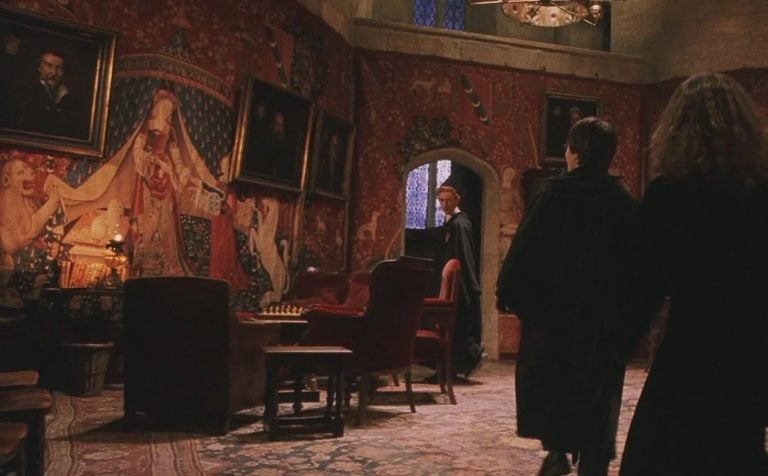 The Lady and the Unicorn Tapestries were made towards the end of the 15th century and are one of the most well-known sets of medieval tapestries. You might recognize them from the Harry Potter movies.

In 1997, Bloomsbury Publishing in London, England, published J. K. Rowling’s book Harry Potter and the Philosopher’s Stone. By 2007, the Harry Potter series consisted of seven books that followed the life of a young wizard named Harry Potter, attending Hogwarts School of Witchcraft and Wizardry. As it became a worldwide phenomenon, the Harry Potter films were produced by Warner Bros. Entertainment, with the first movie being released in 2001 and ending in 2011.

Displayed in nearly every Harry Potter film, replicas of The Lady and the Unicorn Tapestries are featured on the walls of the Gryffindor common room.

According to Warner Bros. Studio UK, the Gryffindor common room is considered one of the most extraordinary sets for the films since it took almost three months to construct. In comparison, the Great Hall (where the characters are often found eating and studying) took nearly the same time and was on a much larger scale. The Set Decoration Department decided to use images of The Lady and the Unicorn Tapestries due to their medieval character. Rather than making a wallpaper inspired by the tapestry set, they recreated the tapestries to hang on the walls, just as they would have been during the Middle Ages.

But what makes The Lady and the Unicorn Tapestries so inviting for the Harry Potter films?

History of the Tapestries

In 1882, The Cluny Museum in Paris acquired a set of six tapestries made during the end of the 15th century. Collectively known as, The Lady and the Unicorn Tapestries, it took 39 years for art historians to fully understand that the first five tapestries exemplified the five senses.

The first five tapestries are, Le Toucher (Touch), Le Goût (Taste), L’odorat (Smell), L’ouïe (Hearing), and La Vue (Sight). Along with the sixth and final tapestry entitled À Mon seul désir (To My Only Desire), whose presence within the set remains a mystery. Today, art historians believe the tapestry represents our sixth sense, the sense of the heart.

The five senses made their appearance in art during the Early Middle Ages. They were first depicted by five different animals laid out by Gothic encyclopedists. Later, the five senses were illustrated in Aristotle’s Parva Naturalia, a book about the natural phenomena of the soul and the body. Though Aristotle believed in the symbolic nature of animals, he instead focused on the sense in man. Aristotle’s depiction of the five senses is best recognized through The Lady and the Unicorn Tapestries.

In the first five tapestries, a lady is performing an action to indicate each sense: the touch of a unicorn’s horn and the flag, the taste of sweets from a dish, while the smell is shown through her making a fragrant garland, the sound is delivered through her playing an instrument, and sight through a mirror.

Finally, the sixth tapestry, To My Only Desire is easily identifiable on the walls of the Gryffindor common room.

Even though the original owner of the tapestry set is unknown, an embroidered red flag with a blue stripe and three crescent moons is woven into the tapestries. Small flowers and leaves, known as millefleurs, are displayed in the background of the tapestries. This decoration was a popular tapestry design style from the late 15th century into the early 16th century.

Aristotle’s text required rather that each sense should be depicted as a human figure acting in a charade by holding a significant object – a mirror for sight, a musical instrument for hearing, a flower for smell, a fruit for taste, and a harp for touch – the plucking of this instrument being in French toucher.

“The five senses in late medieval and Renaissance art,” Journal of the Warburg and Courtauld Institutes 48 (1985).

The “lady” in the tapestry set is accompanied by a lion and a unicorn in every configuration. Interestingly, unicorns were not considered mythological creatures during the Middle Ages, and proof of their existence was never questioned. At that time, no one had seen a lion or an elephant in medieval Europe, yet their presence, such as that of a unicorn, was undeniable.

The title of the tapestry set is also confusing due to the presence of a second shorter woman in four of the six tapestries (Taste, Smell, Hearing, and To My Only Desire). The director of The Cluny Museum, Élisabeth Taburet-Delahaye, named this woman a demoiselle, a term used during the Middle Ages to identify a lady in waiting for a queen or princess.

Regardless, the “ladies” in The Lady and the Unicorn Tapestries were not significant factors in choosing the tapestry set for the films, nor was the tapestry’s allegory of the five senses. Rather, the lion accompanying the lady is what resonated with the set designers.

As fans of the series know, at Hogwarts, there are four student houses; Gryffindor, Slytherin, Ravenclaw, and Hufflepuff. While each house has its distinctive colors and themes, Gryffindor’s house symbol was a lion, representing its courageous students. Therefore, it is unsurprising that The Lady and the Unicorn Tapestries were chosen to cover the set’s walls, which feature Gryffindor’s colors of gold and scarlet.

But what is significant about the unicorn in Harry Potter?

Since the 4th century BCE, there have been tales of a magnificent animal called a unicorn, whose horn possessed the power to heal any living creature from disease. Although certain animals in art symbolize a specific virtue, the unicorn was the holiest, and its power is represented through Christian iconography.

So, perhaps the unicorn in The Lady and the Unicorn Tapestries also symbolizes the uniqueness of the main character’s survival. Harry Potter was “the boy who lived,” and maybe his miracle is echoed through the unicorn’s presence.

Therefore, in a fantasy world of wizards and witches, the Set Decoration Department for the Harry Potter films cleverly incorporated the medieval themes of chivalry and mythology through The Lady and the Unicorn Tapestries. The next time you watch Harry Potter, hopefully, you’ll recognize the marvelous medieval tapestries hanging in the Gryffindor common room.

Boehm, Barbara Drake. A Blessing of Unicorns: The Paris and Cloisters Tapestries. The Metropolitan Museum of Art, 2020.

Shepard, Odell. The Lore of the Unicorn. Courier Corporation, 1993.