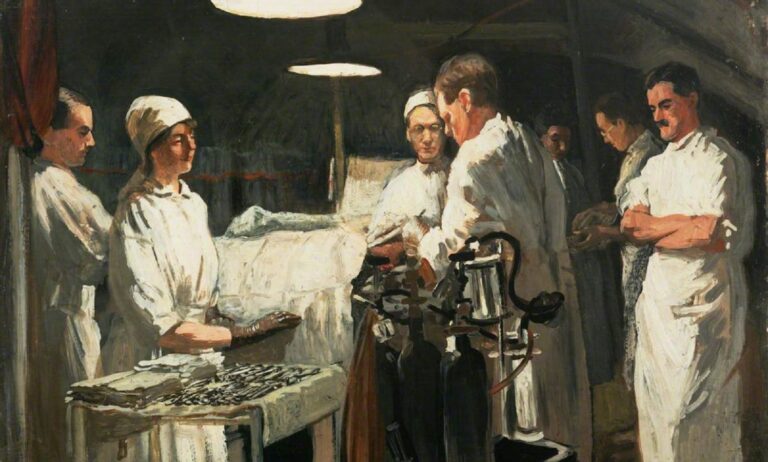 Being an English teacher, so much of what I look at is linked to the literary world.  With the previous examination specification, we used to be able to do a series of war poems for examination that the students absolutely loved and this poem, And it’s War! by Edgar Wallace is one of my most missed lessons!

A tent that is pitched at the base;
A wagon that comes from the night;
A stretcher – and on it a Case;
A surgeon, who’s holding a light,
The Infantry’s bearing the brunt –
O hark to the wind-carried cheer!
A mutter of guns at the front;
A whimper of sobs at the rear.
And it’s War! Orderly, hold the light.
You can lay him down on the table; so.
Easily – gently! Thanks – you may go,’
And it’s War! But the part that is not for show.

A tent, with a table athwart,
A table that’s laid out for one;
A waterproof cover – and nought
But the limp, mangled work of a gun.
A bottle that’s stuck by the pole,
A guttering dip in the neck;
The flickering light of a soul
On the wondering eyes of The Wreck,
And it’s War! ‘Orderly, hold his hand.
I’m not going to hurt you, so don’t be afraid.
A ricochet! God! What a mess it has made!’
And it’s War! And a very unhealthy trade.

The clink of a stopper and glass:
A sigh as the chloroform drips:
A trickle of – what? on the grass,
And bluer and bluer the lips.
The lashes have hidden the stare…
A rent, and the clothes fall away…
A touch, and the wound is laid bare…
A cut, and the face has turned grey…
And it’s War! ‘Orderly, take It out.
It’s hard for his child, and it’s rough on his wife.
There might have been – sooner – a chance for his life
But it’s War! And – Orderly, clean this knife!’

Now, what has this to do with an art website?

We are used to looking at war art in terms of the torn up landscapes with wounded and dying soldiers scattered through it, but what about those who survived but with the most horrific injuries.  How were they treated?  Wallace’s poem, And it’s War! gives an insight that students love to analyse and be amazed at the way in which the doctors and nurses had to work under terrible circumstances.

This, as always, started the connections coming  – Nevinson in his ambulance; Lobley’s depictions of casualty clearing stations,  the sketches and drawings of Henry Tonks with his before and after treatment portraits.

Those of a nervous disposition, should look away now as what you are about to see will shock and appall;  but you cannot help but admire the way in which these pioneers of surgery did their very best by the patients.  While Wallace’s soldier is shown only as a ‘case’ who they were unable to save, many of the surgeons were able to put back together the ‘wreck’, albeit with a degree of trial and error.

If you like this article, you could also be interested in CRW Nevinson: ‘A world of men enslaved to a terrific machine of their own making’.