All Faces of František Kupka 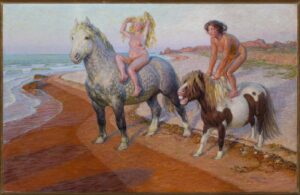 First time I came across František Kupka's work was in the Centre Pompidou and I thought: "Wow, he was such an interesting guy and I never heard about him before!". Not much has changed since then, I still think that Kupka was a fascinating person about whose art we should speak more often.

Kupka was born in Bohemia region (today's Czech Republic), which back then was part of the Austro-Hungarian Empire. He first spent 3 years studying painting at the Academy of Fine Arts in Prague and then he moved to Vienna to study at Akademie der Bildenden Künste. It was 1892, a few years before Klimt announced the foundation of the Secession movement in 1897, yet one could already feel the ferment of change in the air. In these years Kupka created works in an Art Nouveau style which combined symbolism and naturalism.

Symbolism was just a step towards Kupka's new transformation. He was a sensitive man who already in adolescence had been introduced to spiritual concepts about the cosmos by his employer, a saddle maker for whom Kupka worked as a teenager. The exploration of relationship between geometry and spirituality was one of the themes that dominated his life and work. Probably as early as 1894 he became involved in the Theosophic movement and was fascinated by Eastern philosophies. Two years later he moved to Paris to begin studies at Académie Julian.

As he moved to the centre of artistic universe, he began frequenting exhibitions. Undoubtedly, he saw works by Neo-Impressionists and Fauvists whose bright palette and dependence on colour as a means of expression inspired him to experiment with different styles. In the meantime, he did caricatures for various satirical magazines to pay his living. In this painting we see his muse and wife Eugénie, whose body is constructed solely by colours.

In 1909 the Italian Futurists published their first manifesto on the pages of French paper Le Figaro. He was deeply affected by their experiments with capturing movement in painting and sculpture, or re-inventing music, which corresponded with his own attempts at that and his theories on motion and colour, and the relationship between music and painting.

The invention of radiography at the turn of the century, Cubism and Robert Delaunay's creation of Orphism, was a threshold in Kupka's search for an alternative dimension of reality. Through a kind of painterly X-ray vision he analysed movement and form, heading directly towards the only possible direction: the road of abstraction.

It was the early 20th century when Modernism spread its wings in India. This happened as a result of an exposure to various European artists. The...