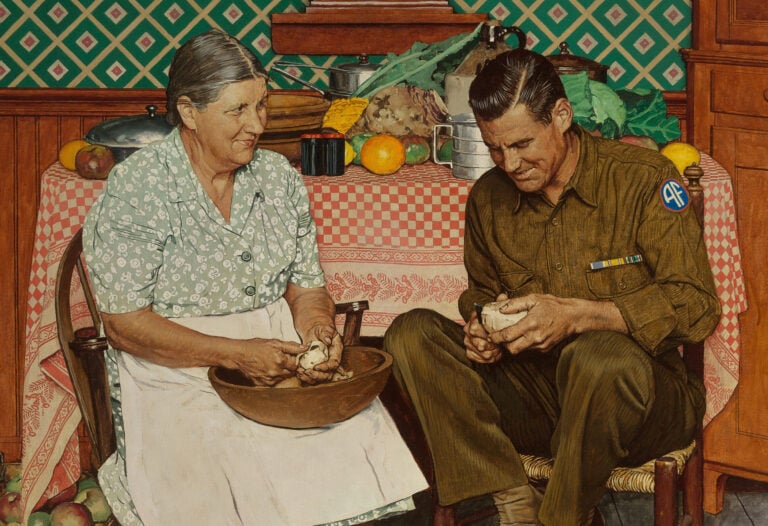 Here are eight heart-warming paintings that represent what the Thanksgiving is about. We wish you all the happiness and the wonder of the holiday season. Have a great Thanksgiving!

1. Freedom From Want by Norman Rockwell

Here it is, the iconic Thanksgiving turkey! The Freedom From Want is the third painting of the Four Freedoms series by American artist Norman Rockwell (1894–1978). He painted this work in 1942 and it was published in the issue of The Saturday Evening Post on March 6, 1943. The family who posed for his scene were the artist’s friends from Arlington, Vermont. Each person was individually photographed and painted into the scene. Rockwell’s art is a reflection of American life and this particular work has become an iconic representation of American Thanksgiving celebrations.

The Thankful Poor is a painting by the African-American painter Henry Ossawa Tanner (1859–1937). It is a different representation of a Thanksgiving celebration than the one presented above. It depicts two African-Americans, presumably a father and a son, praying at a modestly laid table. This genre scene reminds us of moving portrayals of the poor by the 19th-century Dutch and French Realists. This painting is considered to be an important work in African-American art, as it depicts the harsh realities of African-American life, challenging the viewer with the racial problems and injustice that are still commonplace in the US.

Grandma Moses (1860–1961), or Anna Mary Robertson Moses, was an American folk artist. Isn’t this painting slightly reminding you of the winter scenes by Pieter Bruegel the Elder? In this interesting scene, we can see a far-reaching American winter landscape in the background, and an American farmhouse in the foreground. Grandma Moses depicted here a traditional Thanksgiving ritual, catching the turkey.

4. The Turkeys by Claude Monet

The French Impressionist Claude Monet (1840–1926)painted versatile themes in his art—including turkeys. This is a true symbol of the American holiday. Here you can read how to prepare a Thanksgiving turkey according to art!

American female painter, Doris Lee (1905–1983), exhibited this work at the Art Institute of Chicago in 1935 and won the prestigious Logan Purchase Prize. In this famous painting, Lee depicted women bustling in an old-fashion American kitchen and preparing the food for the family celebration. Lee’s works are now known as the most popular nostalgic views of American rural life.

6. Home for Thanksgiving by Norman Rockwell

Norman Rockwell‘s art played an important political role in uplifting the Americans in the years during and after World War II. In this 1945 painting, we can see a mother enjoying the presence of her son who luckily returned home from the war, just in time for Thanksgiving!

Jennie Augusta Brownscombe (1850-1936) specialized in nostalgic representations from American colonial history. This painting refers to the origins of the Thanksgiving holiday with the history of the pilgrims, who celebrated in an autumn feast the first successful harvests. Brownscombe’s paintings appealed to those who sought escape from the industrialization and urbanization of modern cities and idealized rural life.

8. Home to Thanksgiving by John Schutler

This lithograph by John Schutler after George Henry Durrie is one of the most recognized images of Thanksgiving. Home to Thanksgiving is a winter scene in the American countryside. In the foreground, we can see oxen pulling logs of wood and a family being greeted at the doorway of the house by a man. According to the Springfield Museum, this image: “illustrates the satisfaction and contentment of a city man returning to his country home to celebrate this traditional American holiday.”

Hope you enjoyed our selection of these interesting Thanksgiving representations in art! Do you have your own favorites?