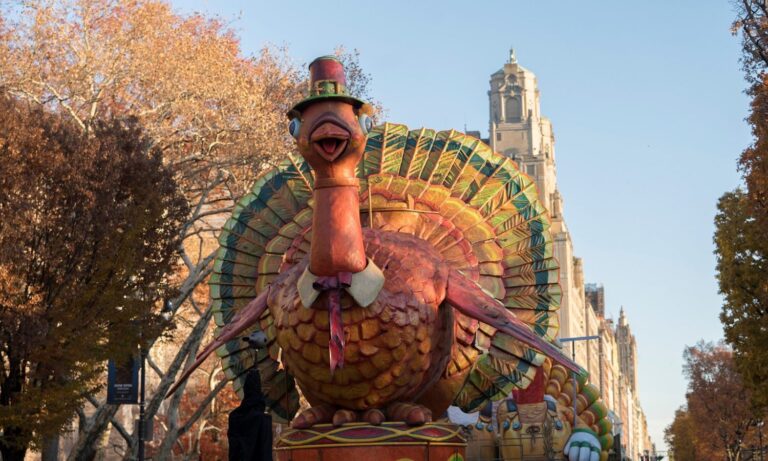 The Macy’s Thanksgiving Day parade holds as much tradition in America as football, turkey and stuffing itself. Over the past 9 decades, it has only grown in size and popularity. Today we will take a look at inflatable artworks by most popular contemporary artists that marched through the holiday parade.

People look forward to seeing not only the regular floats and balloons from the Macy’s Thanksgiving Day Parade, but even more so watch in anticipation at who and what that year’s parade will bring. Musicians, athletes, high school marching bands, cheer teams, and actors from all over the country meet in New York City to walk the parade route and perform.

On Thanksgiving day, millions of people turn out to line the streets of New York City to see what bright spectacle that year’s parade will hold. Even more people, upwards of 50 million, tune into the parade on their televisions. And every year, giant balloons fly through the air. Beginning in 2005, those in charge of the parade decided to outsource a special balloon each year made by an artist on the international scale as part of their Blue Sky Gallery.

Apart from the newer Blue Sky Gallery, the balloons have been around since nearly the beginning of the parade in 1924. Though they have become more complicated, colorful, and larger than life, one thing remains the same: the balloons are a crowd favorite. There is also a time set aside during the week before the parade when fans are allowed to see the inflation process. It may come as no surprise that Macy’s uses plenty of helium during the parade; during World War II, there was a rubber and helium shortage which led to the cancellation of the event for that time.

Tom Otterness is a well-known, and controversial, American sculptor with public works of art all over the world. His works range in size and subject matter; but possibly the largest was the upside Humpty Dumpty and one of the “King’s horses” and one of the “King’s men” balloons chosen for the first balloons in the Blue Sky Gallery.

Jeff Koons is an American artist mostly known for his stainless steel balloon-like sculptures. The subject of this particular balloon came from Koons’ Celebration series which included works such as Balloon Dog, Sacred Heart, Cracked Egg, and Tulips. Some of these sculptures have been sold for millions at art auctions. The particular sculpture/balloon in question is a rabbit holding a carrot.

Keith Haring passed in 1990, well before his art floated down the parade route. In a nod to the graffiti artist, who would have turned 50 in 2008, a much larger version of one of his more popular works debuted. The bold lines and a pop of bold color is indicative of the late artist’s style. This white figure lifting up a heart is the only “flat” design of any balloon in the parade over the years.

The Japanese artist has worked with multiple other designers, artists, and musicians. Murakami’s works can be seen on previous Louis Vuitton merchandise, Kanye West’s album Graduation, and has most recently collaborated with Billie Eilish. In 2010, two of his characters, Kaikai and Kiki, floated through the air. Alongside his creations, the artist also participated while donning a kooky flower suit.

Labeled as “Burtonesque,” Tim Burton’s work has a quality that takes on a life of its own. From Beetlejuice, Edward Scissorhands, to Charlie and the Chocolate Factory, Frankenweenie, and the Corpse Bride; Burton’s creativity lent itself to a larger than life balloon, perfect for all ages. The story of B. Boy (or more simply, B.) is that he has been sewn together from discarded birthday party balloons the children no longer wanted.

In what would be the last balloon in the series for quite a few years, KAWS (Brian Donnelly) entered a balloon replica of his most noticeable character, Companion. He has Mickey Mouse-like features, but is otherwise more somber and withdrawn.

FriendsWithYou is not a single artist, but rather a collaborative effort between Samuel Borkson and Arturo Sandoval III. Their style is described as post-pop. The artists have completed installations and sculptures from the east coast of North America, to the west. Their art is happy and promotes positive messages. This is reflected in their little cloud float with accompanying rain drops and rainbow.

This year’s showcased balloon is by Japanese artist, Yayoi Kusama. Kusama began creating polka-dot and net motifs as a child and went on to dabble in various mediums ranging not only from painting and sculpture but performance art and writing as well. Kusama’s Love Flies Up to the Sky showcases the polka-dots she began using in adolescence.