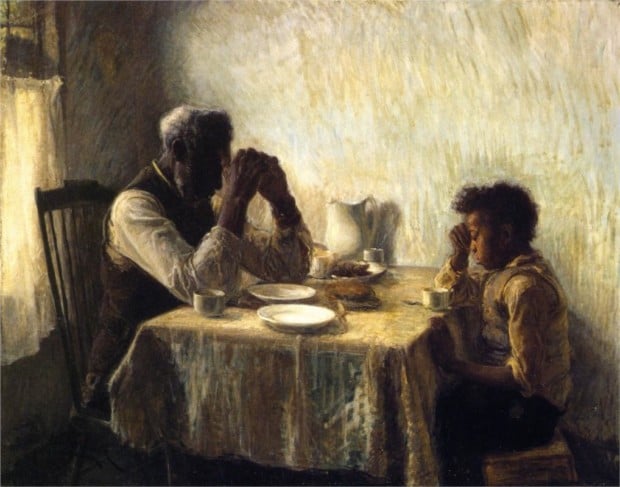 Henry Ossawa Tanner (1859–1937), the first African-American artist who became internationally successful, was known for his beautiful religious paintings and scenes of African-American life. He is often compared to Old Masters such as Rembrandt and Caravaggio because of his subjects and use of dramatic lighting.

A minister’s son from Pennsylvania, Tanner studied with influential American realist Thomas Eakins at the Pennsylvania Academy of Fine Arts before traveling to Europe in 1891. He settled in Paris and studied at the famous Académie Julien.

When he returned to America a few years later, he was respected as an artist but found himself discouraged by the nation’s widespread racism. He moved back to Paris, which was much more accepting, and lived there for the rest of his life. His works were exhibited with great success in both countries. Although he was honored in America with prizes, exhibitions, and membership in the National Academy of Design, his paintings were often displayed separately from those of his white colleagues. No such thing ever happened in France, where he won a medal from the Paris Salon of 1897 – a huge honor.

Although Tanner painted a lot of different subjects, he is primarily known for a few types. In his genre paintings, he depicted the lives of rural African-Americans in the South, showing everyday events with soft elegance and dignity. His Biblical paintings reflected his deep religious faith using a combination of brilliant lighting effects and detailed naturalism. He also made many beautiful landscape paintings.

Although Tanner experienced racism in America, he did not depict social or political themes in his art, and he was not very involved in politics of any kind. Instead, he cared far more about beauty, technical perfection, and religious ideas.