Masterpiece Story: The Treachery of Images by René Magritte 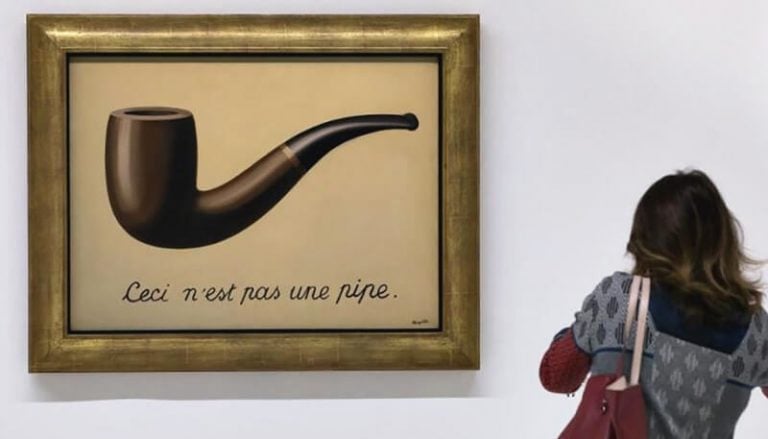 As you can see, this painting depicts a pipe. Underneath it, there is a French sentence that says “This is not a pipe”. You may ask, what the hell is going on here?

René Magritte (1898-1967), a Belgian Surrealist painter, created The Treachery of Images when he was 30 years old. Magritte loved word games. He was also determined to prove that painting and poetry were on an equal footing despite the Surrealists’ constant flaunting of the pre-eminence of the written word. Magritte blurs the gap between the language and the meaning. His statement is taken to mean that the painting itself is not a pipe; it is merely an image of a pipe.

This is how Magritte explained it:

It’s quite simple. Who would dare pretend that the representation of a pipe is a pipe? Who could possibly smoke the pipe in my painting? No one. Therefore it is not a pipe.

The painting is sometimes given as an example of a meta-message. “The word is not the thing” and “The map is not the territory”. Magritte likely borrowed the pipe motif from Le Corbusier’s book Vers une architecture (1923), since he was his admirer. However he may also have been inspired by a comical sign he knew from an art gallery, which read, Ceci n’est pas de l’Art (This is not art). The painting is the subject of a famous book-length analysis by French philosopher Michel Foucault.

Surrealism was heavily influenced by Freudian psychology. It represented a reaction against the “Rationalism” that some believed led Europe into the horrors of World War I. It attempted to join the realm of dreams and fantasy to the everyday world. The Treachery of Images, now in the collection of the Los Angeles County Museum of Art, became an icon of modern art. Furthermore, it influenced a large group of a younger generation of conceptually oriented artists, including Jasper Johns, Roy Lichtenstein, Robert Rauschenberg, Edward Ruscha, and Andy Warhol.