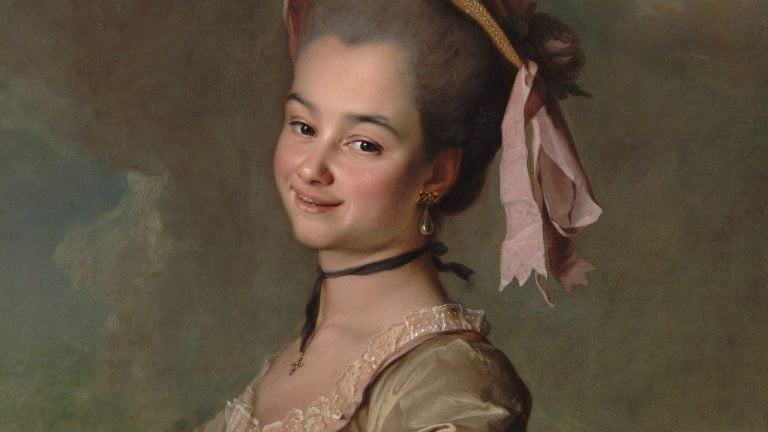 The Russian empress Catherine the Great aspired to Enlightenment ideas that propagate human intellectual power. Numerous tracts, essays, and books of French philosophers formed an image of a perfect state and society in Catherine’s mind. Thus, the empress decided to raise a new generation of well-educated girls called Smolyanki. At Catherine’s request, famous Russian painter Dmitry Levitzky made a magnificent series of portraits that became gems of the Russian Museum collection!

The Smolny Institute for Noble Maidens was opened in 1764 by the order of Catherine the Great. It was the first female educational institute in Russia. The project reflected important ideas of the Enlightenment. The Empress hoped that educated girls would help renew the environment in their families and society, soften the cruel morals, and create a “new breed of people.”

The students were taught all the “pleasant to society” talents: foreign languages, etiquette, singing, and playing musical instruments. The girls studied there from six to eighteen years old. The teachers received guarantees from the parents that they would not meet their daughters in person before graduation.

The empress was keen on her project and took maternal care of Smolyanki. Catherine wanted to perpetuate the new faces of Russian female intelligentsia. Therefore she requested the famous Russian painter with Ukrainian origins, Dmitry Levitzky to paint the cycle of portraits called Smolyanki. Dmitry Levitzky was a thoughtful artist who made realistic portraits revealing the true colors of the person being portrayed. The Smolyanki portraits answer the main question of the Enlightenment era: What does it mean to be a human?

Smolyanki. The allegory of Music

Glafira Alymova was the most successful among her classmates. The cheerful, witty, and undoubtedly gifted girl deserved the favor of the Empress and the founder of Smolny Institute, count Ivan Betskoy.
In this portrait, you can see the first harp musician in Russia.

Interestingly, harps were only imported to the Russian Empire in the 18th century! Alimushka, as Catherine named Glafira Alymova, had remarkable musical talent and that is the reason why Dmitry Levitzky portrayed the girl as the allegory of music.

Take a look at Glafira’s attire: a white silk dress was a gala uniform for students of “the fourth age”, 15-18 years old. The dress and the hair are lavishly decorated with pearls, flowers, and bows. Her exquisite appearance gives cause to think this girl had a stroke of luck. Indeed, after graduation, Glafira Alymova got a gold medal and the Imperial Chiffre and later she became the Statsdame of the Russian court.

Smolyanki. The allegory of Science

The next image of the first generation of Smolyanki belongs to Ekaterina Molchanova. Intelligent and serious Ekaterina preferred reading to any court amusements. Look at this girl: she had a confident posture but a modest countenance, accurate and proud at the same time.

Details help Ekaterina embody the allegory of science: the book in her hands, the globe behind her, and an interesting device on the table. It is called “antlia”, a vacuum pump. Ekaterina was very good at math and physics so that is why you see the device used in experimentation next to her. However, Smolyanki mainly studied humanities, arts, cooking, and etiquette, and only got basic knowledge of hard science.

Till 1917 all the portraits of Smolny girls were located at the Peterhof Palace. The paintings were damaged due to the sea climate, the canvases eventually became wet and covered with mold. During the restoration, the portrait of Molchanova was cleansed of dirt and old varnish. The restorators figured out that Molchanova’s dress was white, not yellow, as it had seemed.

Smolyanki. The allegory of dance

Smolyanki were famous for their artistic talents, in opera singing and dancing particularly. Natalia Borscheva was the most successful dancer. In this portrait, you can see 17-year-old Natalia performing a Spanish dance. Obviously, the artist captured a moment from her fast dance: it is difficult to stay in her pose for a long time.

Surprisingly, Dmitry Levitzky depicted Natalia’s right arm anatomically incorrectly. However, the painter demonstrated his brilliant technique in the depiction of fabrics. Basically, the most complicated tones for artists are black and white. Levitzky managed to avoid the black spot effect depicting the hard velvet dress successfully.

Alexandra Levshina or Lyovushka looks different from her classmates. An elegant and tranquil maiden captured in movement. She was probably depicted as Zaira from self-titled tragic opera by Voltaire. Interestingly, Catherine the Great was sure that theatre was the most important means to improve the outlook and morals of young ladies. Therefore, the empress chose the plays for Smolyanki.

One interesting fact about Dmitry Levitzky’s technique: after a microchemical analysis of the canvas, it turned out that Levitzky used an oil-wax binder. Wax paints are more transparent than oil paints, consequently, the painter obtained a glow effect. For the 18th century, this was a completely new technique that allowed the artist to show the structure of silk and veil fabrics properly.

In this portrait, you can see fifteen-year-old Ekaterina Nelidova as the cunning and witty servant Serpina from Pergolesi’s intermezzo La serva padrona (The Maid Turned Mistress). Nelidova performed the role of sly Serpina so brilliantly that excited admirers devoted numerous poems to her.

Contemporaries noted that Ekaterina did not fit the beauty ideals of the 18th century but it was not an obstacle in becoming the favorite of emperor Paul of Russia! Prince Ivan Dolgorukov wrote of Nelidova:

“Smart girl but her face is utterly ugly, with aristocratic bearing but short”

How can we resist these sparkling eyes and rosy cheeks?! Nelidova is turned to the viewer and seems to share the joy that has gripped her.

Captured whilst dancing the minuet, she expresses immediacy, genuine youthful fun, and passion. The portrait of Nelidova seems to be the most joyful and luminous work.

The dress and the background are painted in almost the same colors, but the background is somewhat muted, while the color of the dress sparkles, and therefore the figure seems more voluminous. The shaded side of Nelidova’s figure is given in the lightest area of ​​the background, while the illuminated side is contrasted against dark clouds and foliage. This solution helps the artist achieve an airy, natural image.

Pastoral is a genre in art depicting peaceful rural life. In this painting by Levitzky, ten-year-old Khruscheva plays the daring shepherd, and Khovanskaya, who is eleven, plays the timid shepherdess. The young shepherd invites his girlfriend to dance, gently touching her chin with his hand. Despite their young age, the girls confidently and accurately perform their roles. In the Smolny Institute, girls also performed as male characters and Ekaterina Khruschova succeeded in playing males.

The girls’ faces are devoid of idealization and embellishment. Levitzky is not afraid to show Khrushchova’s ugly, broad-cheeked face with a short and thick nose. But how much guile, liveliness, and fire is in her face! Khovanskaya, on contrary, is demure. And with what inimitable skill Levitzky builds the picturesque scale of this portrait, designed to express the feeling of the joy of life, the unique charm of youth!

Unlike most of the heroines of the cycle, the girls wear the uniforms of the Smolny Institute, and not theatrical costumes. It is believed that the portrait was tentative, perhaps the artist’s intention has not yet been fully formed.

On the right, you can see Fedosia Rzhevskaya. She is wearing a blue dress – such were worn by the Smolyanka of the “second age”, from nine to twelve years old. On the left is Nastasia Davydova, a Georgian princess. The girl is wearing a brown dress, the uniform of the “first age” students – from six to nine years old.

Remarkably, Dmitry Levitzky did not embellish the appearance of the girls, which was not typical of classicist painting. Despite the decorative design, these are lifelike and realistic images.

Pay close attention to Nastasia, her excited glance at Feodosia. Basically, in isolated institutes, younger girls looked up to older students; treating them as role models. So does Nastasia, she looks at the elder student with fascination, holding a blue rose in her tiny hand. The rosebud symbolizes a little Nastasia, whose beauty and intelligence will blossom in years.

Smolyanki were taught to use women’s main weapon – “intelligent attractiveness”, which, despite the rules and canons of generally accepted styles, was embodied in Dmitry Levitzky’s portraits.

What have portraits of the Smolyanki in common? Namely, they are the rhythmic smoothness of movements, which is emphasized by graceful gestures. And a coloristic solution based on a combination of shades of olive, gray, pink, and beige tones.

Smolyanki by Dmitry Levitzky can be considered the highest achievement of Russian portraits of the 18th century. They clearly show the best features of the artist’s talent, his sharp and well-aimed observation, brilliant color talent, richness of imagination.