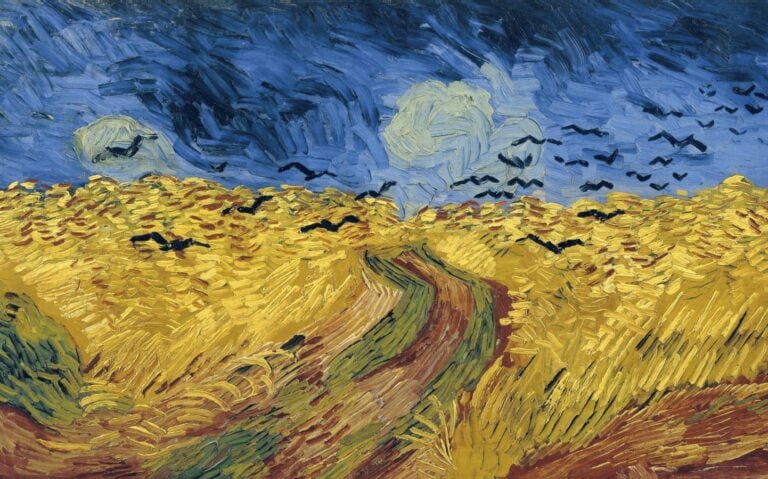 In July 1890, Vincent van Gogh painted one of his best-known artworks, Wheatfield with Crows. The painting is on display in The Van Gogh Museum in Amsterdam, Netherlands, and has long been thought of as his last painting before his death by suicide only weeks later.

Although there are many who have disputed the claim that this painting is the last artwork ever made by Vincent van Gogh, it is certainly possible to understand why the tragic end of Van Gogh’s life has been so closely associated with this image. Many elements of the painting can be interpreted as indicating the emotional turmoil Van Gogh experienced. As a result, it makes for an interesting example of how an artwork can be reflective of the mental state of an artist.

The painting itself is oil on canvas, vivid in color and expressive in brushstrokes; as is typical of Van Gogh’s style. The canvas depicts a gold wheatfield with threatening skies overhead and crows swarming amongst the wheat. A path divides the field, leading to nowhere. It is an incredibly bleak scene and one which visualizes the intense loneliness that Van Gogh was experiencing and wrote about in his published letters.

Looking first at the sky, the ominous darkness above the field can be interpreted as reflecting the impending depression in Van Gogh’s own life. In addition, the suggestion of an incoming storm through the darkened blue paint has been read as a foreshadowing of his death. The birds in the painting also act as an effective reference to Van Gogh’s emotional state. Commonly featured in horror films and gothic literature, crows are often used as an indicator of darkness or as an omen of death, which is especially fitting in this painting.

The location of the wheatfield in the painting has been linked to the outskirts of Auvers-sur-Oise, France, where Van Gogh spent his last months. The field has also been associated with the location of Van Gogh’s suicide, another reason for the assumption that this was, in fact, his last painting. It is thought that Van Gogh shot himself in the chest in a location similar to that depicted, managing to return to his room in Auvers where he would die. Knowing this, it is understandable why Wheatfield with Crows has been interpreted to be a suicide note as it appears to depict the exact setting of Van Gogh’s death; the disorder of the crows can even be seen as responding to a gunshot.

This painting by Van Gogh is particularly remarkable because it is an excellent demonstration of how meaning and value are applied to an artwork. Van Gogh painted many wheatfields during his artistic career, none of which have received as much attention as the painting we are looking at here. It seems that because of the tragic circumstances surrounding it, this artwork has developed a particular authority and value, one which continues to stick regardless of it not necessarily being his “last painting”. Therefore, Wheatfield with Crows makes us ask a question that can be applied to many masterpieces; is it the painting itself or the artist behind it which gives meaning to an artwork?