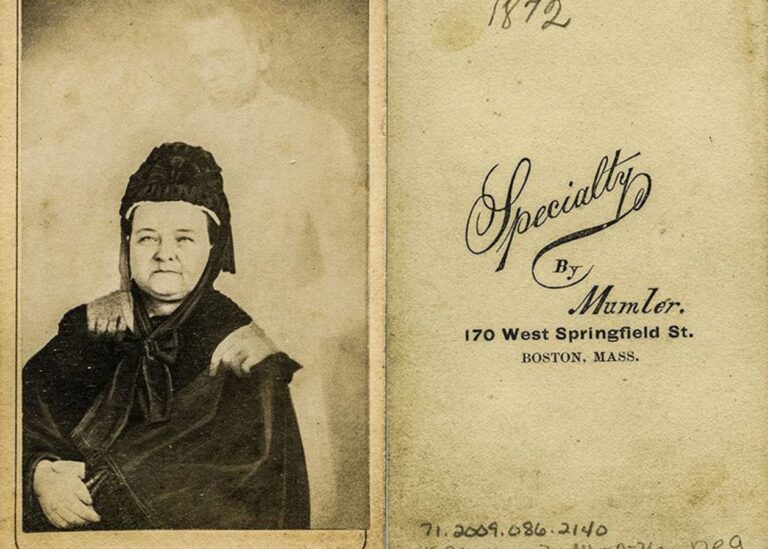 Spirit photography, photographs that allegedly show ghosts, have always captured the eye. They are peculiar, bizarre, but above all else horrifying. Their appearance is connected to the beginnings of photography and Spiritism of the 19th century.

Spiritism was very popular in the 19th century. It was a religion or a “spiritualistic philosophy”, founded by the French educator Hippolyte Léon Denizard Rivail (1804-1869). Rivail wrote a book on “the nature, origin, and destiny of spirits, and their relation with the corporeal world” under the pen name Allan Kardec.

This event, along with the several wars taking place at the time, inspired thousands of people to search for the truth about spirit phenomena and demonstrate it by photography, which appeared to be the most “scientific” proof.

There were several photographers who captured “real” ghosts and spectres through their lenses. It is clear nowadays, thanks to our advanced photography techniques, that most of them were fake. But it is still interesting the way they were taken.

William Mumler (1832–1884) was the most famous photographer of this phenomenon. He claimed to have captured the spirit of Abraham Lincoln beside his wife, Mary Todd Lincoln. Mumler started doing these pictures accidentally. One day he was taking a portrait and when he developed the negative, a suspicious specter was there. It caused controversy instantly. Although he was taken to court and tried for fraud and larceny, his photographs circulated widely during the last quarter of the 19th century. Nowadays his photos are singular pieces which are collected as visual curiosities.

Another famous example was Ada Emma Deane, a photographer and psychic, who captured controversial photographs of the Armistice Day. Her photos are now in the Museum of Hoaxes. The photograph was taken during the Armistice in 1923. It depicts floating faces that were supposed to be phantoms of dead people. Eventually, it was proved that the photograph was fake. Deane took pictures of different sportsmen’s faces and composed them together on the original negative.

These pictures were made by double exposure on the negative. They were daguerreotypes or collodion plates, which were the most common photography methods in the 19th century.

It consists of carefully charging the plate on the camera for taking one photo, in this case the hypothetical specter, that could be a model or a sculpture… The plate is not developed yet, so after taking the first picture, the photographer sets the next photo to be taken with the same print. So the negative receives two different subjects thanks to this technique and during the development, the two subjects appear as one in the final result.

Another way of faking these photographs was by making photomontages, which is the placement of scraps of papers in front of the plate or adding them later to give the sensation of having a specter in the final picture.

One example of this particular method was the story of Cottingley fairies. On a hot July day in 1917, girls, Elsie Wright and Frances Griffith, decided to create five pictures. These pictures caused amusement and disbelief at the time.

Elsie and Frances were young girls when this event took place. Frances was nine and she traveled with her mother from South Africa to stay at her aunt’s house, whose daughter was Elsie, then sixteen years old. They loved to play together, especially in the backyard, near a steam in the woods, which was where the adventure began.

In their games they claimed to have seen fairies. No one believed them, so they borrowed Elsie’s father’s camera to prove it. What no one expected was that fairies actually appeared in the photographs.

Elsie and Frances cut out different illustrations of fairies from a children’s book and glued them to a stick, so then they could set up the little fairies on the ground. It is an interesting and inventive way of making fake supernatural phenomena photographs.

There were people who supported the authenticity of ghost photography, while others claimed it to be obviously fake. There was a big uncertainty about ghost phenomena, although the cruel wars made people look for comfort in the idea of their loved ones being “alive” somehow. The photographs of this kind are interesting and coveted as oddities.

But the question is… do ghosts exist?